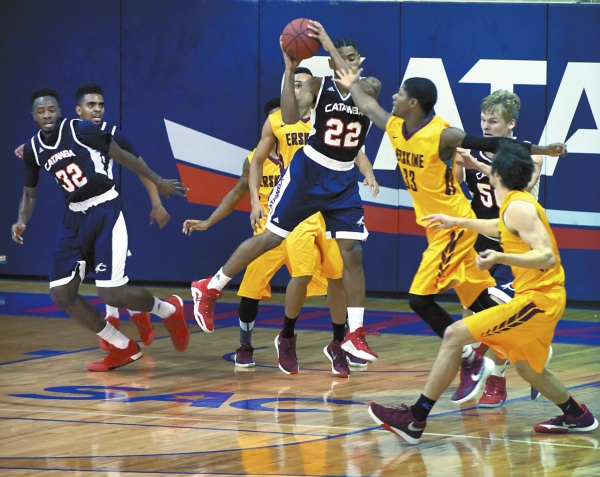 Catawba 's Jerrin Morrison 22 rebounding the middle of the pack. photo by Wayne Hinshaw, for the Salisbury Post

SALISBURY — Free admission for droves of school kids from all over Rowan County created a loud Education Day attendance of 1,781 for Catawba’s Monday morning basketball game with Erskine.
Those youngsters screamed every time Catawba crossed halfcourt or put up a shot, but they watched the Indians flunk most aspects of Basketball 101.
Basically, the Indians gave coach Rob Perron 1,781 reasons to get frustrated. Erskine’s 70-63 victory handed Catawba its first loss in the remodeled Goodman Gym.
“The atmosphere was great, but we just didn’t play well,” Perron said. “We needed better defense in the second half and we needed to play with more offensive confidence. It was frustrating.”
The result was unexpected given that Erskine (5-4) was riding a three-game losing streak and making a three-hour road trip from Due West, S.C.
The numbers don’t lie. Erskine shot a dismal 25.9 percent in the first half and a blistering 55.2 percent in the second half. Erskine went 17-for-19 at the foul line, while Catawba (3-5) was missing 10 free throws. Erskine’s superior shooting percentages off-set Catawba’s 14-7 edge in offensive rebounds.
Guard Joby Glymph scored 25 points for Erskine’s Flying Fleet. Ray Lock, a 6-foot-5 shooter, came off the bench and poured in 19 points. Brannon Dark, Erskine’s 6-6 center, added 16 points.
Catawba got 15 points from point guard Rakeen Brown and 12 from forward Andrew Ingram, but the Indians’ sophomore standouts, foul-plagued Jameel Taylor and Jerrin Morrison, combined to shoot 3-for-17. That made the non-conference game an uphill fight.
“We’ve been playing horrendous defense,” Erskine coach Mark Peeler said. “We improved some defensively today, but we’re still kind of an ugly team, and when we win, we’ll win ugly. It was ugly today. I think both teams are trying to find themselves.”
Erskine plays the “Pack Line” defense that Virginia has turned into an art form, clogging the paint, making dribble penetration difficult and forcing lots of 3-point attempts. Catawba hoisted 28 3-pointers and only connected on seven.
Glymph, Erskine’s star, has scored 30-plus twice this year, but he was 3-for-10 in the first half. Both teams struggled offensively. Catawba managed to take a 28-25 lead to the locker room when Brown made a 3-pointer that beat the halftime buzzer.
Ingram knocked down two 3-pointers early in the second half for a 36-33 Catawba lead, but Erskine got hot, especially Lock and guard Thomas Nolan, The visitors scored 14 straight points to take control.
“The runs they had were extended,” Perron said. “We couldn’t stop the bleeding.”
When Nolan buried a 3-pointer with 9:39 remaining, Catawba trailed 54-41. That was the largest deficit. Catawba started to fight back at that point, increasing its level of fight on the offensive glass.
“Catawba is bigger and a lot stronger and more physical than we are,” Peeler said. “We did well to hang in there with them on the boards as well as we did.”
When things looked bleakest, Catawba got a spark from freshman guard Jordan Barber.
Barber made a 3-pointer, made a layup, went to the floor for a loose ball, fed Julian Sampah for a 3-on-1 fastbreak layup, and made a steal. With 3:58 remaining, Catawba had climbed back to a 58-55 deficit.
When Morrison made two free throws with 1:18 left, the Indians trailed 66-63, and they were one stop away from having a great chance to pull the game out. But Erskine was patient, stayed under control and got the ball to Glymph. He nailed a short jumper from the left block with 53 seconds left.
“We were going to put it in his hands on that possession,” Peeler said. “We knew he’d be able to get a shot off. Fortunately, he made it.”
Ingram missed a 3-pointer with 22 seconds left that would’ve made it a two-point game. That was the last key miss on a day of misses. Morrison, Brown and Sampah all went 1-for-2 at the foul line in the closing minutes. A make on any of those might have changed things.
“It’s hard to put a finger on why they shot so much better in the second half, but No. 1 (Glymph) was a handful all day and 44 (Lock) was a bigger contributor in the second half,” Barber said. “It was just a frustrating day, but we’ll keep working.”
Catawba returns to the floor on Wednesday night at home against SAC foe Carson-Newman.