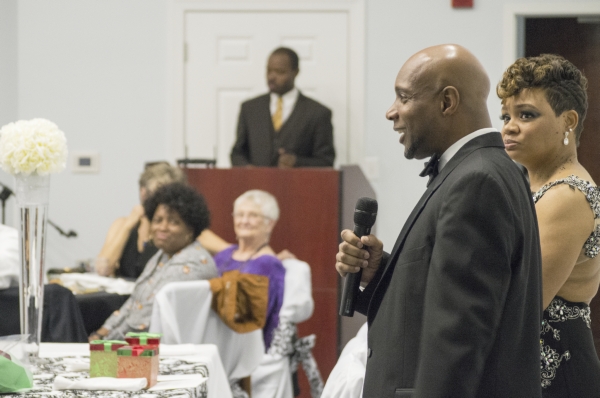 Founded in the West End, nonprofits celebrate first year of making a difference

Gemstones Academy and COMPASS presented scholarships to three high school freshman during its gala this weekend. The recipients were Lamyron Greene, Tia Cowan and Taliea Hopkins. Each received a $500 scholarship. All three graduated from high school in spring 2015 and were participants in the nonprofits’ programs.

The gala, however, was the end to an eventful year for the two organizations, which tutor and counsel students from grade school to graduating seniors. The groups have participated in service projects and fun events, such as a summer camp and CIAA championship earlier this year. Both nonprofits have also moved from the Miller Recreation Center to 121 W. Council Street, Suite 202, in downtown Salisbury.

However, the most significant affects of COMPASS and Gemstones on lives on the 30 participants to date are life lessons and moral values, according to participants and the two founders. Stanley Bailey, a sophomore at North Rowan High School, said the mentoring programs prevent children from getting into trouble. Salisbury High freshman Kiera Cherry, who received an award during this weekend’s gala, said she’s become a better speaker since joining. Greene, who is attending UNC Pembroke, said mentoring programs help build character, “which can go a long way in life.”

Alex Clark, who runs COMPASS, said both nonprofit programs date back to a July 2014 meeting at the Miller Recreation Center in Salisbury’s West End neighborhood.

“We were two of the programs that came out of that meeting,” Clark said. “Even though we already had them in our brain, we put them into action. From January to now, we’ve done a lot.”

Clark and Alisha Byrd, who runs Gemstones, joke that they have slightly different versions of how both nonprofits got started, but agree on the most important point.

“We’re trying to steer them in the right direct and overcome opposition, whatever it might be,” Byrd said. “We have a lot of kids that come from single parents homes and just being able to be the moral support they need in areas they’re lacking is important. Whether it’s a father not being there or a mother not being active in their lives, we’re trying to help fill that void.”

Clark listed the changes he’s noticed among participants as: a greater sense of self-awareness, being able to overcome peer pressure and understanding values and integrity. The letters in the name of Clark’s nonprofit spell out most of the values taught in the program — confident, optimistic, motivated, persistent, assertive, studious and successful.

“When you bring a group of kids together and they come from different situations, we try to get them to see a bigger vision of themselves,” Clark said. “More importantly the level of respect for life has just appreciated tremendously.”

Attendees packed the room for the gala, but Clark said numbers weren’t the most significant factor in whether or not Gemstones and COMPASS were successful.

“We could have one little table in the middle of the room and we would have still accomplished our goal of making a difference,” he said.

By Amanda Raymond amanda.raymond@salisburypost.com The demolition of a house in the North Main Local Historic District was the cause of... read more