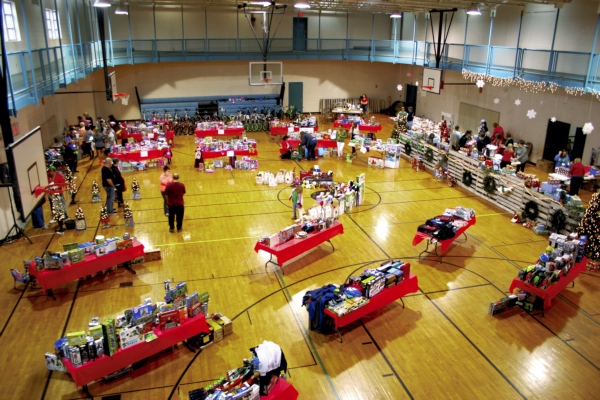 More than 150 volunteers helped throughout the day at the Christmas with Dignity store, sponsored by Main Street Mission, and held at the South Rowan Y.

Christmas with Dignity allows folks to shop for children’s gifts

CHINA GROVE — Jeff Hubbard stood in the doorway of the gym early on Saturday morning. A long line formed behind him. He greeted each customer and explained where all the gifts may be found.

This is the second year that Main Street Mission has sponsored the Christmas with Dignity store at the South Rowan Y, and, thanks to the generosity of local churches, businesses, and individual donors, the event served even more children this time around.

Hubbard, a graduate of the mission’s first Getting Ahead class, said that in 2014, the program served 90 children. This year, that number jumped to 150 children.

Some 150 volunteers served as greeters, shopping assistants, gift wrappers and gift couriers, taking shifts throughout the course of the day.

Hubbard said he planned to be there all day long.

“I just enjoy doing stuff like this,” Hubbard said. “I have to stay busy.”

He volunteers four days a week at the mission, located at 306 S. Main St. in downtown China Grove. “More if they need me.”

For the past several weeks, the mission collected a huge number of toys, clothing and stocking stuffers. They were neatly displayed by age on rows and rows of tables throughout the gym — boys’ gifts on one side, girls’ gifts on the other.

First-time shoppers came to the store in the morning, and those who came last year shopped in the afternoon, said Hope Oliphant, the mission’s community outreach advocate, who coordinated Saturday’s effort.

“We just had such a great outpouring last year,” she said, “and more people wanted to be involved this year. We tweaked the program so that we could serve more families. A lot of our folks are working, but their income is just barely at survival level.”

Oliphant sent applications to all of the South Rowan area schools, and clients applied at the mission as well.

All of the items were donated, and could be purchased at a fraction of their retail cost. Each family who came to shop could purchase five items per child, one bike per family. They could also pick up two stocking stuffers per child, and one hat and scarf per child.

Walter Russell and his daughter, Taylor, were arranging hats and scarves on a long table.

“This is a never-ending task,” Russell said with a smile.

Taylor was volunteering with her political science club at Salisbury High School, where she is a sophomore.

“This is a really good set-up they have,” her dad said.

Ron Brown was a member of Hubbard’s class. He spent the day as a floater. He now serves as a co-facilitator for the Getting Ahead classes.

“It makes me feel good,” Brown said. “I know I’m giving back and helping in the groups. I can share by perspective of what it’s like on the other side. I just feel full of life now.”

Wanda Odom of Landis was the first customer to enter the gym. She was shopping for her two granddaughters, ages 5 and 8.

“I’m just gonna see what I can get them,” she said. She was assisted in shopping by Carroll Lynn Ritchie and her daughter, Fallon. The two are members of Concordia Lutheran Church, which sent a large contingent of volunteers. Members from First Reformed Church, Mount Zion United Church of Christ, Christ United Methodist Church, Grace Baptist Church, Homestead Baptist Church and First United Methodist Church also volunteered.

The Concordia youth group had raised $900 through a recent breakfast at church, and did their shopping at Target, where they received 20 percent off their purchases, according to Lisa Ashley, one of their advisers.

“We took 10 kids shopping, and divided them into groups,” she said. “We gave them a list of suggestions, and said they could spend $300 per team. One of the kids told me, ‘This money goes really fast!’”

Ashley volunteered at the gift wrap table, along with Julie Deal, who was having trouble wrapping a basketball.

“OK, we’re doing this again,” Deal said, after she’d poked a hole in the paper and had to start over.

Her luck didn’t change much during the course of the morning. She kept having to wrap oddly-shaped packages.

Having presents wrapped was Nancy Gill of Salisbury, who’d made purchases for her two grandsons, Leon, 12, and Qylieek, 8. She is raising the younger boy, whose birthday is on Christmas Day. He gets presents for both occasions, she said.

Every family also went home with a heavy box filled with non-perishable food and household items.

Volunteers Nathan Lambert and Gary Rodgers loaded stacks of gifts in Crystal Perez’s truck. Perez, a single mom who lives in China Grove, bought gifts for her four children, 12, 11, 6 and 3.

“I just needed help with my kids,” Perez said. “Last year, they didn’t have a very good Christmas.”

This year is going to be much different, she said, her face aglow with a huge smile.

“Thank you!” she told Lambert and Rodgers. “Merry Christmas!”

By Shavonne Walker shavonne.walker@salisburypost.com Three days a week, Mikaela Maines spends her afternoons at Happy’s Farm learning to do what... read more