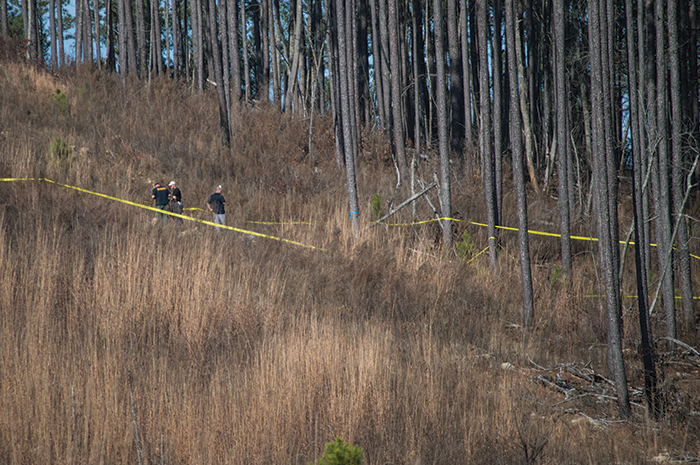 Josh Bergeron / Salisbury Post - Rowan County sheriff's deputies search an area of rural Rowan County near the Davidson County border for parts of a decomposed human that was found over the weekend.

The Rowan County Sheriff’s Office has confirmed two bow hunters found a decomposed human Saturday evening in an area near the intersection of Bringle Ferry Road and River Road.

Lt. Chad Moose, of the sheriff’s office, confirmed Sunday morning remains belonged to an unidentified adult. The body parts were scattered over an area with waist-high grass, Moose said. He said the body had likely been in the area for several months.

Moose said the body was completely decomposed to the skeleton. The sheriff’s office will check its missing persons list to identify the body, he said. The body does not belong to Erica Parsons, who has been missing since 2011, Moose said.

The remains will be sent to the NC State Medical Examiners Office, according to the sheriff’s office.

Rowan County Sheriff’s Deputies on Saturday evening were searching an area in southeast Rowan County after receiving a call about possible human remains.

In a news release late Saturday night, the Rowan County Sheriff’s Office said officers were searching an area near the intersection of Bringle Ferry Road and River Road. It’s near the border of Rowan and Davidson counties.

The news release said deputies were dispatched to the area at about 5 p.m. to investigate potential human remains. Two people who were bow hunting in the area reported the possible human remains.

Deputies taped off the area where remains were reported shortly after arriving on scene, according to the news release.