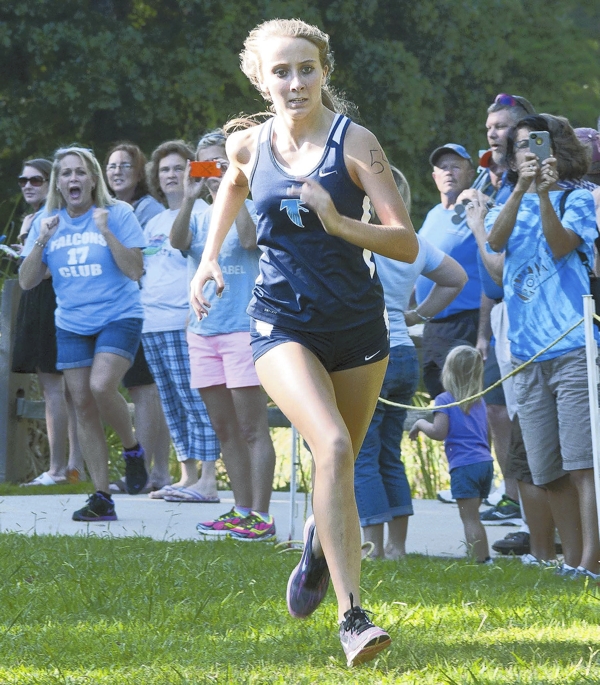 MOUNT ULLA — West Rowan senior Josie Heglar isn’t big, but she possesses almost unlimited energy.
“She ran with our boys team all summer,” West Rowan cross country coach Scott Foster said with a smile. “She’s one of the toughest kids you’re ever going to meet.”
Heglar’s boundless energy has translated into a lot of goals for West soccer.
It’s also made her a two-time county champion in cross country, as well as the reigning county track champion in the 800 and 1600 meters.
When it comes to running, Heglar excels at any distance from 400 meters to 5000. She has the endurance you’d expect of a cross country standout, but she augments it with unusual speed. Her finishing kick is something to behold.
Heglar signed recently with Western Carolina, a school that’s understandably excited about her versatility. The plan is for her to compete throughout the school year for the Catamounts — cross country in the fall, indoor track in the winter, and outdoor track in the spring.
Heglar, who plans to major in exercise science, isn’t a huge fan of cold weather, but she’ll make the adjustment. Running at higher elevations will also take some getting used to, but running cross county hills with ferocity has always been one of things that’s separated her from her competition.
“Western is a big school and I really wanted to go to a big school,” Heglar said. “I wanted D-I, and Western is D-I. When I visited there, I had a chance to run with their girls. It is different running in the mountains, but I enjoyed it. Im looking forward to competing.”
Jordan Bostian, who competed for West Rowan’s boys team, runs for Western now and is doing well at the college level. He and Heglar are friends.
On Oct. 14, Heglar competed in the United Way Invitational at Southside Park in Newton. She ran a personal best 19:54 — breaking 20 minutes was one of her goals for her senior year — and placed sixth in a strong field. Western Carolina coach Danny Williamson was in attendance. He was there to see his daughter, Colbie, a junior who was competing for Pisgah High, but it also gave him an opportunity to check out potential recruits. Heglar impressed him. Her performance in Newton is one of the reasons she got a scholarship offer from Western.
“Josie is an outstanding young lady with unbelievable character,” Williamson said. “She was exactly what we were looking for to add depth and quality to our (track) middle distance and cross country programs. The most impressive thing about Josie was that she wanted to be at Western Carolina and wanted to be a huge part of the tradition that we have developed through the years.”
Heglar grew up as a soccer player.
Cross country wasn’t part of her life until high school, but former West champion Rebecca Parker, who now competes at Georgia Southern, was a big influence on her.
“I looked up to Rebecca and she set the bar very high, and that’s a big reason I’ve had some success,” Heglar said. “My coaches have helped me improve and my confidence has grown a lot over the years.
Parker and West coaches taught Heglar how to stretch her energy over a 5K race and to pace herself for a furious finish. Coach Ester Marsh made some technical adjustments last year, moving her arms lower and training her to run with her fingers open.
Heglar had a tremendous school year as a junior, winning the Rowan County Cross Country Championships in the fall and winning the 800 and 1600 in the Rowan County Track and Field Championships in the spring. She placed third in the 1600 (5:40) and fourth in the 800 (2:33) in the South Piedmont Conference Championships.
As a senior, she’s defended her cross county title and she should have a big spring in outdoor track.
She’s currently competing in indoor track. She won a Polar Bear Meet at East Rowan on Wednesday, running 3:19 in the 1000 meters.
Heglar has always been her own toughest critic, but that’s part of what makes her who she is.
“She just wants it more than most people,” Foster said. “You talk about heart — Josie’s got it. The tougher the competition, the faster she runs.”