‘They are our future’: Rowan-Salisbury students recognized for selfless service 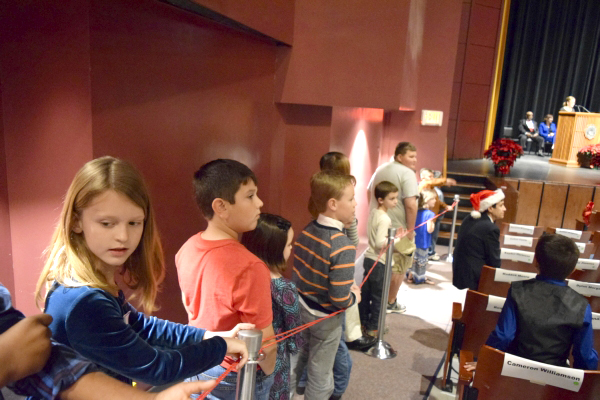 K-5 students eagerly wait to receive a certificate of appreciation at the Service Above Self Youth Awards in 2015.

It’s been 20 years since the United Way and the Rowan Rotary Club held the first Service Above Self Youth Awards. That year, United Way President Jim Duncan says, they had 34 nominations. Thursday night at Catawba College, 310 individuals from the Rowan-Salisbury School System received awards for honor, dignity, selfless service and commitment to their community. This year’s nominations surpassed 2014’s by nearly 100 individuals, Duncan said.

“Our goal is not to have the largest number of attendance,” Duncan said, “Our goal is to recognize every child, age eight to 18, who does service above self.”

Duncan, along with Bob Lippard, started the program 20 years ago.

Thursday night the lower house of Keppel Auditorium was packed with students, teachers, family and friends who came to cheer on every open-hearted volunteer. Children in elementary, middle, and high school are nominated for volunteering their time to help others. They start non-profits, build mobile libraries, collect scarves and hats for leukemia patients or translation for ESOL students.

Students are nominated by parents, teachers, grandparents or principals. Chandler says the awards wouldn’t be possible without them.

“Someone has to notice that these kids are volunteering,” he said.

All children nominated receive a certificate of appreciation. Two runners up and one first place winner are chosen for individual and group categories for elementary, middle, and high school. This year, the judges were the Catawba College men and women’s gold teams and coach Sam Gealy.

As the winners trouped across the stage, smiles wide, they received a medal and a Visa gift card containing between $50 and $500.

“Many of them have never been recognized for anything,” Chandler said.

Nominating schools or organizations are also presented with a check for half of the student’s prize. The funds, like the award ceremony itself, is a joint effort, Duncan says. Award money is provided by the Smith Family Foundation, the United Way, and the Rotary Club’s yearly Spooky Sprint 5k, which serves as a fundraiser for the Service Above Self Awards and other youth programs.

The schools that had the highest numbers of nominees submitted in a timely manner were presented with awards and a check for $500. But it’s the kids who are the stars.

“They are our future,” Duncan said, “All we’re doing is paying it forward. We’re recognizing kids that will eventually take over the volunteer work we do.”

Nominations for the 2016 Service Above Self Youth Awards begins immediately. Students can be nominated at www.rowanserviceaboveself.com

Ella collects toboggans and socks for leukemia and lymphoma patients. She began collecting items after her father died of leukemia in 2009, and has collected more than 1,000 items.

Kate volunteers with Rowan Helping Ministries, Operation Christmas Child, the Angel Tree, Relay for Life, the Woodleaf Fire Department and Faithful Friends. She is also heavily involved in her church.

Wendy collects books for children to read while they are sick in the hospital or waiting on a patient. She started her own collection drive on social media and has collected hundreds of books.

These students have assisted with a blood drive, raised money for Relay for Life, participated in the White Christmas canned food drive for the Salvation Army, donated to the Christmas Happiness Fund and much more.

The DREAM Girls built and decorated a free Little Library at Isenberg Elementary. They’ve also hosted a gala to honor women, assisted with uniform drives and volunteered for the Arc’s Festival of Trees.

These classes planned a breakfast and program for veterans, including writing poems, letters and speeches to share with the veterans.

After a sledding accident left him hospitalized last year, he noticed that the toys and books for young children at the hospital were old and worn. Now he donates books, toys, crayons and coloring books to children who are hospitalized. He also participates in other volunteer activities.

Megan created her own organization called CF Savers to help a friend with cystic fibrosis.

While at the Girl’s Softball World Series in Portland, O.R., the girls noticed that the team from Uganda was carrying their equipment by hand and had no travel bags. The girls purchased travel bags for the Ugandan team and arranged for professional team photos to be taken.

This troop volunteered for the Rowan County Bark for Life.

Susannah created a mobile library for the Western part of the county, coordinating visits with the school system’s meal sites and the Cover Church. She used her own transportation to get to each site.

Grace started a food pantry for students at her school.

This group of 60 cadets put in 5,550 service hours, volunteering at Rowan Helping Ministries, Adopt-A-Veteran and other programs.

This group worked to beautify an area park, planted trees for Earth Day, and cleaned the high school campus among other services.

This group collected cans for a food drive, assisted with a blood drive, and conducted an area beautification at North Rowan High among other services.

Preschoolers donate from their harvest to Christmas Happiness Fund