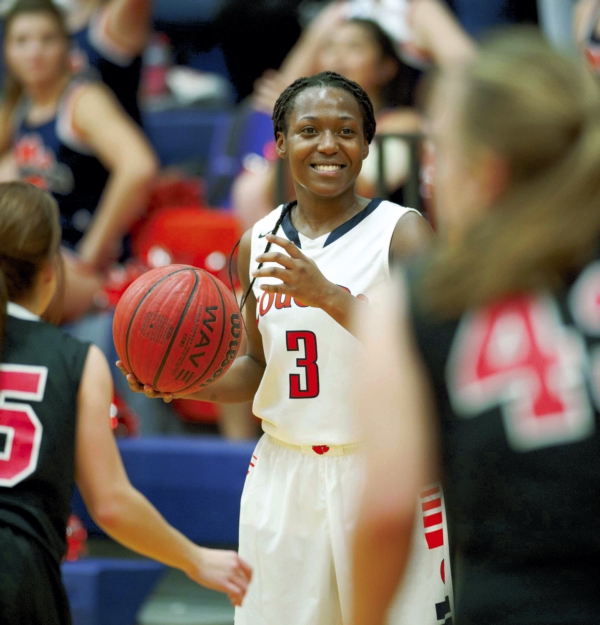 CHINA GROVE — Carson’s girls got away from their basic principles on Tuesday, and a lopsided loss to West Rowan was the result.
Carson shot quickly, rebounded timidly and fouled frequently, and there wasn’t much coach Brooke Misenheimer could do except shake her head as the Falcons turned it into a track meet.
But in Friday night’s 67-29 win against South Rowan, Carson got back to doing the things that have made it a consistent program — sharing the ball, making the extra pass, boxing out and playing solid team defense.
“We had a bad game against West and we knew we had a bad game,” Carson sophomore Olivia Gabriel said. “We were excited to get back out there and make up for it against another rival. We played hard. We won the hustle battle.”
Carson won every battle.
The Raiders (1-6, 1-4 SPC), who were competitive against Cox Mill and nearly won at Concord, got steamrolled. It was 17-4 after a quarter and 25-5 at halftime.
“When you score five in the first half, well, you don’t win those,” South coach John Davis said.
South shot 1-for-19 from the floor in the first half.
“Defensively, we did a great job,” Misenheimer said. “We came out with a lot of intensity.”
South freshman Janiya Downs entered the game as the county’s leading scorer (22.8 ppg) but was limited to 15 points. Gabriel keyed the defense on Downs, who had only two points at halftime. Downs got eight points in the first four minutes of the fourth quarter after Gabriel had sat down for the night. Downs fouled out with 3:39 remaining
“Janiya is really tall and long,” Gabriel said. “But I’m faster and I was able to move my feet and beat her to the spot. If she did get by me, I had good help.”
Maren Shumaker was a pretty terrific help-defender for Carson (5-2, 4-1 SPC) and drew four charges.
“One of the things we talked about before the game was that no one except Olivia (Gabriel) and Sydney (Taylor) had taken a charge,” Shumaker said. “Coach asked us who was going to take one tonight. I didn’t expect four, but I was trying to help whenever they drove.”
Downs scored about three minutes into the game to make it Carson 4, South 2. The Raiders didn’t make another field goal in the first half. Riley Corriher finally ended an ugly, air-ball-filled drought with a three-point play that cut Carson’s lead to 31-8 with 5:28 left in the third quarter.
All 11 Cougars scored. Gabriel had 12. Taylor, who can make open 3-pointers all night, had 10 in about 10 minutes of playing time. Kailie Ketchie and McKenzie Gadson scored eight each. Gadson had three straight buckets in the second quarter to stretch a 19-5 lead to 25-5 at the break.
Micah Furr hit a 3-pointer for Carson, and Destiny Jackson, whose been nursing a knee injury, drilled two long jumpers. Siera Fesperman fought for six points inside in about six minutes.
“We all ran the floor a lot better and harder tonight,” Gabriel said. “When I was pushing the ball, there also was someone opposite from me.”
While Carson bounced back, South took a step back.
“We made seven field goals in the game,” said Davis, staring in disbelief at the scorebook. “We worked on motion offense all week, and then we went out there and stood around. It’s back to the drawing board now. After a game like this, there’s only two ways you can go — roll over and play dead or come back refreshed and ready to play hard.”
Davis sounded as disappointed as Misenheimer did after the West Rowan game, but the smile was back on Misenheimer’s face after a nice bounce-back.
“We regrouped,” Misenheimer said. “When you share the ball like we did tonight and when you play as hard as we did tonight, everybody has fun.”