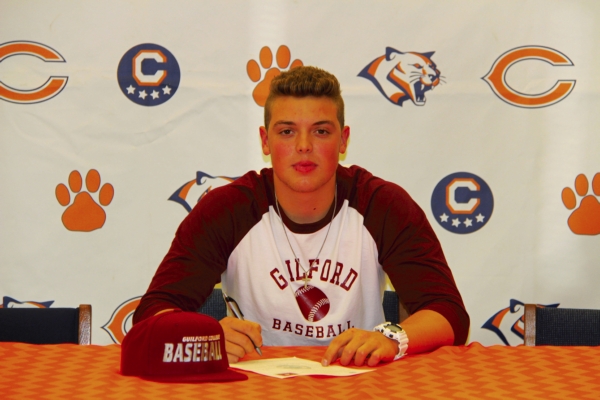 submitted photo ... Carson High School’s Brandon Mock is going to be a baseball student athlete at Guilford College in Greensboro.

CHINA GROVE — Carson outfielder Brandon Mock has gotten knocked down a lot, but he’s always gotten back up.
Mock was cut from the China Grove Middle School team as a seventh-grader.
He tried out again — and was cut again — as an eighth-grader.
But Mock isn’t easily discouraged. He’s kept working toward goals that once seemed out of reach.
By his junior year, the stocky right-handed hitter was a starter for Carson, one of the county’s strongest baseball programs, and he’ll be counted on as one of the team’s leaders as a senior.
He’s also be moving on to college baseball. Mock recently made things official with NCAA Division III Guilford.
“When he was younger, he was just this really small kid,” Carson coach Chris Cauble said. “When he tried out for us a freshman, we weren’t sure he could play for our jayvee team. Usually, we can only play about 15 kids, and we looked at Brandon as 16, 17 or 18. We told him we’d keep him if he wanted a spot on the team, but that he probably wouldn’t play. He said he wanted that spot. He said he wanted to try.”
Mock surprised his coaches. By the middle of his freshman season, he had earned a starting spot as the Cougars’ designated hitter.
“I just kept working at it,” the 5-foot-10 Mock said. “Getting at-bats as the DH was encouraging.”
That first taste of athletic success helped push Mock in the weight room, where he and his father were regulars.
“Weightlifting was our passion,” Mock said. “Getting stronger helped build my confidence. It also helped me hit with more power.”
Mock returned to the jayvees for his sophomore season, but he hit with more authority, batting .350. He was growing, not only in physical stature, but as a baseball player.
“He added a lot of strength and now he’s a very strong kid for his size,” Cauble said. “He also liked football, but he dedicated himself to being a baseball player.”
Mock’s first varsity baseball season was as a junior last spring. He got at-bats as the left fielder and DH, but it’s tough to put up great offensive numbers in high school baseball. It’s a short, cold season, starting in late February. By the time the weather gets nice, the season is over.
“I hit the ball OK,” Mock said. “I just didn’t find many holes.”
Mock’s stats weren’t exciting — a .216 batting average with eight RBIs, but there were a lot of walks (.365 on-base percentage), and he was a different hitter the second half of the season.
“About halfway through, that’s where it started to click for him,” Cauble said.
Mock had key RBIs in tight wins against East Rowan and Cox Mill and came through with his biggest hit at Concord. He stepped into the box with the Cougars down, 7-6, and delivered a go-ahead, opposite-field double. Carson didn’t play well in that one, but Mock’s clutch double keyed a 9-7 SPC victory.
“I’ve always been a pull hitter, but we work at lot at being able to go backside, especially with two strikes, and I got that hit on a 2-2 count,” Mock said. “I don’t know if I burned the right fielder or if he just misjudged it, but it went over his head and cleared the bases.”
Besides the instruction he gets from Carson coaches, Mock has benefited from time spent in the batting cage with former Central Cabarrus star Kevin Govan, who played at UNC in the 1990s.
Mock continues to get better. His contact is not only getting harder, it’s becoming more consistent.
Mock played for the Charlotte Megastars showcase team last summer, a squad that also includes Carson center fielder Michael Morrison, a likely Division II signee this spring.
Mock had 60 trips to the plate for the Megastars, who are coached by former MLB outfielder Jeff McNeely, and he had zero strikeouts. Mock struck out 14 times in 63 plate appearances for Carson last spring, so he’s figured something out.
Guilford coaches attended one of the Megastars’ games, watched Mock go 2-for-3 and invited him to their camp.
“At the end of the camp, they asked me if I wanted to commit,” Mock said. “That’s the goal I’ve been working for — the chance to play college baseball. It was a great feeling.”
Mock should have a strong senior season. Cauble is counting on him. His teammates believe in him.
“He’s earned a chance to play college baseball because of his work ethic and he’s always done the right things to make himself a better player,” Cauble said. “Every time we’ve challenged him, he’s answered the challenge.”