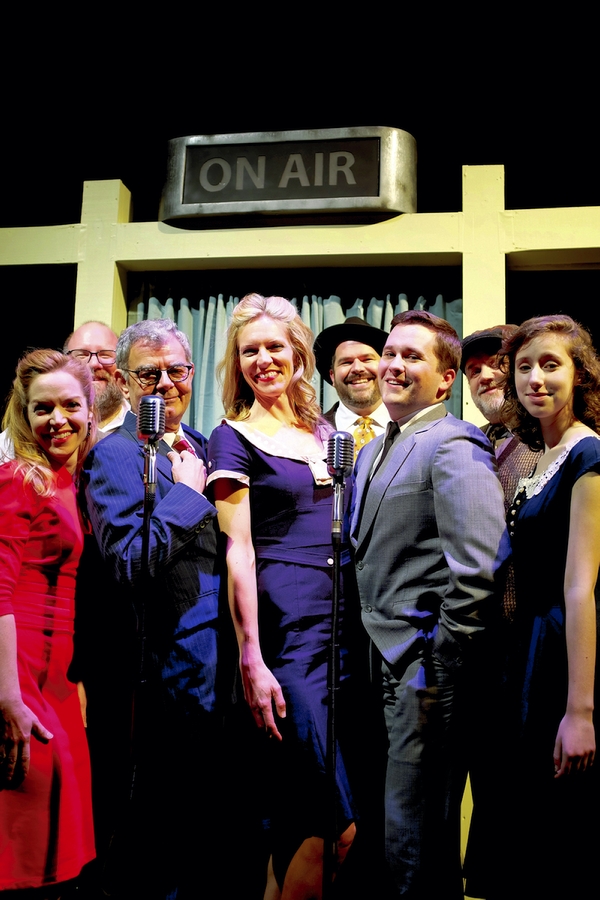 The cast of 'It's a Wonderful Life: A live radio play'

Lee Street theatre’s production of “It’s a Wonderful Life: A Live Radio Play,” is very much like sitting down while someone tells you a story.

The cast of nine voices all the characters, with some actors playing multiple parts. Bob the stage manager (Rodney Lippard) makes most of the sound effects and voices a few parts himself. He’s got a knack for a slamming door and people falling in water.

During the radio play, which is set in the 1940s, there are several commercial breaks, with the cast doing ads for hair cream, Duck Toilet Cake and more familiar products — F&M Bank and Fibrant — each one including a jingle set to familiar Christmas music.

Applause signs remind the studio audience when to clap, and cast members chat before the show, at the 15-minute intermission and at the end. You are part of the play, you see.

Gary Thornburg, who voices Uncle Billy, Mr. Gower and the narrator, comes out before the production to discuss what they’ll be doing and suggests closing your eyes and just listening now and then. Good advice — it does change the experience.

But it’s fun watching the cast of the radio play perform ‘It’s a Wonderful Life,” too. There’s a great deal of shuffling from one microphone to the other as characters change, time for performers to sit in the vintage chairs and couch while waiting for their next cue and the bits of sound effects.

John Snell is particularly convincing as Clarence — he has the inflection and tone just right, very reminiscent of Henry Travers, who played the role in the movie many people have seen multiple times.

Thornburg’s calm narrator, nervous Uncle Billy and irascible Mr. Gower are all clearly different characters. He alters his voice and delivery just so to make them different. Visually, he changes his body language for each. But radio listeners wouldn’t know that.

Chris Eller is Freddie Filmore, the radio show host, who plays mean old Mr. Potter, George Bailey’s brother Harry and several other characters. He’s also the one who presents the advertisements. He, too, changes body language and voice for the different personalities, capturing young Harry quite well. His Mr. Potter is perhaps not as menacing as Lionel Barrymore, but who is?

Matthew Ensley is George Bailey, from youth to desperate, never-born George who learns what the world would be like without him. He has tons of energy and loads of character. Visually, he is not the tall and skinny Jimmy Stewart, but again, this is radio. He conveys George’s many emotions very well.

Sara Lee voices the character of Mary, who’s called upon to be tender, firm and terrified at one point.

Violet, the girl who’s always had a thing for George, is voiced by Ava Holtzman, who also plays George’s daughters and other characters. She does a good job switching between slightly jaded Violet and the girls.

Dana Vanhoy voices Mrs. Bailey and other characters, with a strong voice and presence; she also gets to make the wind blow with a clever sound-making device.

Altogether, it’s fun to experience a classic in a new and different way. You won’t miss the absent movie scenes because the group creates a believable Bedford Falls. And you’ll still tear up at the end when George finds life is pretty wonderful, after all.

Healthy Wilson-Bowlby directed, with a set by Chris S. Speer which created the right atmosphere.

The production is sponsored by F&M Bank, as you’ll hear in their radio commercial, and the season presenting partner is Fibrant.