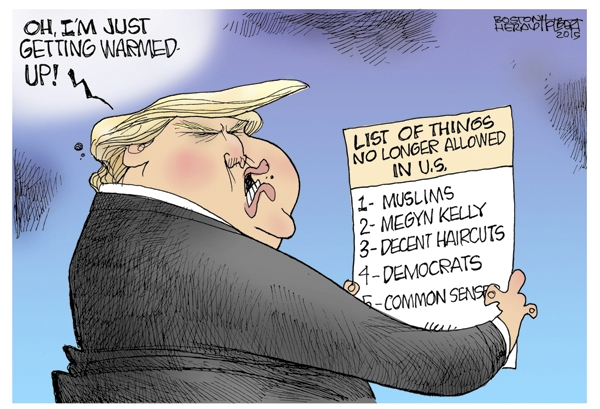 … A question about reactions to Trump

Trump is damaging his party, and causing more people to consider the Democratic opposition. If I were a Republican, that would bring near-apocalyptic fear.

Trump represents the mindset of about 40 percent of all Republicans. It’s blame, fear, bigotry and hate directed at minorities. The GOP preys on these emotions and convinces simple minded middle class Americans to vote against their better economic interests.

The Republicans have to support him or he’ll run as a third party. That would be a catastrophic blow to the 2016 elections.

You need to ask yourself a question. How is Donald wowin’ them in the South? The smart mouth New Yorker coming into the mom n’ pop and getting taken to the cleaners is a staple of Southern comedy. Yet the Donald packs ‘em in.

Will the study be available for the public to view?

Yes. The entire study and implementation plan for the new brand will be shared with the public both online and in hard copy.

The Convention and Visitors Bureau will encourage broad-based engagement and sharing during the branding development process, especially with community surveys in January and more importantly during the implementation of the new brand.

… 13th Amendment a milestone to remember

Yes, racism is still rampant today; how else can anyone explain the position that blacks cannot rise above a minimum-wage job or become law-abiding citizens? This is every bit as racist as the KKK, or even as the slave-holders of old.

… Then again, when your position is that blacks aren’t smart enough to get a voter ID card or stand in line at the polls, labeling it “voter suppression,” that pretty much says it all.

Locking the descendants of slaves into economic slavery/poverty, massive incarceration, lynch mob-style government-sponsored wrongful killings — we have a moral obligation to stand up, speak up and work to end any possible form or resemblance of slavery. Any righteous and fair-minded individual should be able to see there is “unfinished work to do.” And for those who can not see it, if you would just open your mind, we can open your eyes. As Jesus Christ has said, there is “sight for the blind.”

… Popular German store may be coming to Salisbury

Costco — we want a Costco!

Publix needed. We already have Aldis and my research says this other one is no different.

I’d rather have a Whole Foods, Fresh Market or Trader Joe’s. … Let’s have something nice and upscale.

We need to build up and expand that side of Jake. It is nothing but wooded area there. Ready to see some growth.

… What does Islam teach?

The Rodwell translation does not use the word “Surah.” Not once. Nor are the verses where the letter writer states they are in this archaic translation. … However, the long form of the above argument is found on the “Answering Islam” website …. I’ve seen this letter in meme form more than once.

It appears to have joined with the standard “I read the Koran.”

The bullet passed a few feet in front of her. Now, heavens forbid, suppose she had been in the line of fire. Then what?

How unprofessional and seemingly unconcerned is the police department, given a certain set of circumstances.

What would you have had them do?

If you don’t know where the shot came from, you can’t just go out and charge someone with a crime.

So thankful she was not hurt. If she had been, I am sure they would have found out who the shooter was. Folks, please be careful out there when you do practice with your firearms. Always know where that stray round might go.

The corporate fascist military industrial complex and imperialism are to blame for the increase in terrorism and mass shootings. The American Dream has become a nightmare thanks to the greedy sociopaths behind the destruction of the middle class and never ending war on humanity.

And here I thought it was insane liberals hell bent on disarming victims, all while doing nothing to actually stop bad people from getting guns.

From a 2013 “Truth in Media” article: “But Mass Shooting Tracker uses an extremely broad definition of what many people would consider a mass shooting. If she had used a more restrictive definition that only counts incidents with deaths, as the federal government does, she would have come up with a much lower number. The Congressional Research Service counted 25 incidents in 2013, compared with 363 incidents counted by Mass Shooting Tracker.

“The claim is partially accurate but takes things out of context. We rate this claim Half True.”

Typical liberal media. No concept of reality. If this journalist is well read, I might suggest a brief re-read of Genesis, the part where Cain killed Abel with a rock. You see, violence isn’t a gun problem; it’s a heart problem that has existed since time began. Try as you might you won’t legislate human nature.

… Too sacred for research?

The gun show in Salisbury-Rowan Dec. 5-6 is an abomination and a support for terrorism. … No one needs an automatic or military gun except those truly in the military (not para-military).

In North Carolina we have the right to protect ourselves, and if for some reason people choose not to do so, they are negligent and perhaps even guilty of cowardice. Luke 22:36 says sell your cloak and buy a sword.

Any scenario one chooses to conjure up in their own minds as to why they would or would not want to arm themselves is up to them. Even a coward may need to protect their family or someone they don’t know at sometime.

When the Second Amendment was written, rifles and pistols were what were used and voted for use by our citizens. Nowhere was it ever envisioned that citizens would have the “right to carry” multiple-round assault rifles. The NRA is an absolute joke in promoting the use of these weapons in anyone’s hands.

The answer is this. They were obeying the law — 95-99 percent of mass shootings have occurred in gun-free zones. Law-abiding citizens do not violate the gun-free zones, and this is where the psychopaths choose to do their murderous rampages

Taking away the weapons of law-abiding people will only lead to an increase in violence. We must hasten the day when those who use firearms to commit crimes regret the day they were ever born, by long sentences, up to and including incarceration for life, and at hard labor.

Liberals never want to admit or acknowledge that this new liberal society they’ve created has also created an entire generation of mass-shooters —young people with no sense of values, morals, or integrity, nor any sense of purpose. … Bad parents always make excuses for their murderous and evil children; and liberalism is nothing if not a bad parent.

People of color should go out and purchase tons AK-47, AR-17 or .50 caliber sniper rifles. We would get gun control ASAP.

After the people of color purchase guns, they should register for concealed carry permits and invest in gun stocks such as Smith and Western while shares are affordable. The prices of these shares will continue to rise. … Will it take gun fights at NRA meetings to get responsible gun owners to lobby for better firearms control? Why not start by banning assault weapons?

A question about reactions to Trump Why are the GOP and Dems alike scared to death of Donald Trump? Simply... read more