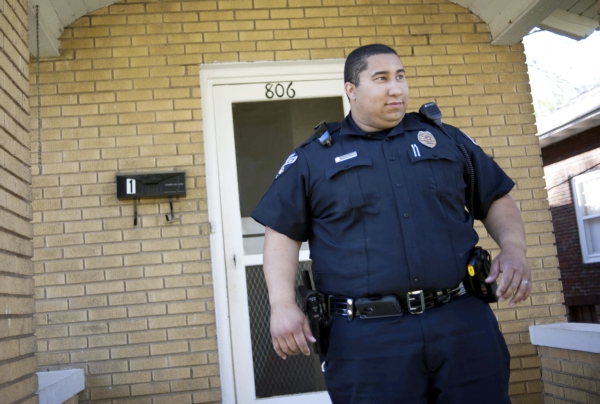 In this 2014 file photo, Salisbury Police community relations Officer Reuben Ijames stops to visit with residents in the West End of Salisbury. Ijames was placed on administrative leave in October and fired in late November, city records say, because he harassed female co-workers and drove his patrol car after drinking alcohol. Jon C. Lakey/Salisbury Post

A Salisbury Police officer placed on administrative leave in late October has been fired for sexual harassment and driving a patrol car after drinking alcohol, according to documents obtained by the Post.

Reuben Ijames, 28, was placed on paid administrative leave on Oct. 21 for undisclosed reasons. At the time, Police Chief Rory Collins and City Manager Lane Bailey declined to comment, saying it was a personnel matter.

The city’s policy reads, “All employees are prohibited from any conduct that is sexually harassing or which may create an offensive work environment. This includes, but is not limited to, repeated, offensive or unwelcome flirtations, advances, propositions; commentaries about an individual’s body; sexually degrading words used to describe an individual; or the display of sexually suggestive objects or pictures.”

“We did an internal investigation,” Bailey said.

Bailey said Ijames was initially investigated for sexual misconduct within the department. According to Ijames’ disciplinary action report, it was revealed during the course of the investigation that on the evening of Oct. 15, and possibly into the early morning hours of Oct. 16, Ijames drove his patrol car after drinking alcoholic beverages, also in violation of city policy. Ijames was off-duty at the time.

The disciplinary report said that Ijames “demonstrated extremely poor judgement and inattention to the safety of other drivers who were operating motor vehicles during those hours, and had a complete disregard for the potential damage [he] could have done to the image of [his] department or for the liability the City could have incurred if [he] had caused a serious accident while operating a patrol car with alcohol in [his] system.”

Bailey said he was unable to provide any more information about either incident, as it was an internal matter.

The report stated that Ijames’ behavior was “unbecoming for a Salisbury Police Officer.” Ijames dismissal was effective Nov. 24. Ijames’ pay continued through Nov. 24, he will not be paid for unused, accrued annual leave.

A notification e-mail sent within the police department on Nov. 25 advised that Ijames “is to be treated with the same respect and courtesies as any other citizen, and should not be in the building unless escorted.”

A Tennessee-based marketing firm is mining for data and anecdotes this week as part of Rowan County’s rebranding. Chandler Thinks,... read more