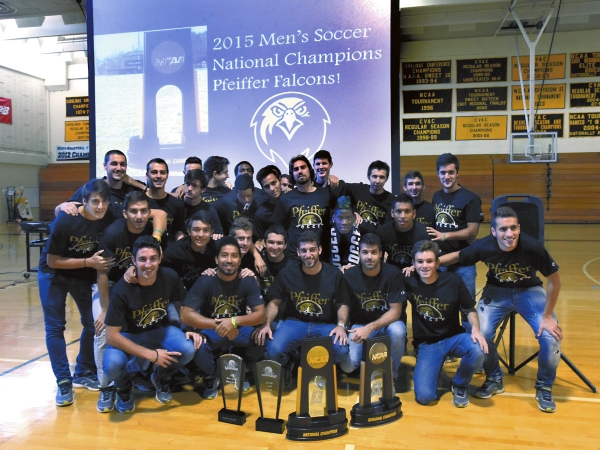 MISENHEIMER — When you go undefeated, there’s no need for a do-over.

Minus the uniforms and grass, and the opponent, of course, the Falcons rejoiced in the still warm glow of a 25-0 season with the university community and fans.

Even Pfeiffer legend Joe Ferebee came out, 95 years old and wheelchair-bound, but the former baseball coach was front-and-center and cheering on the Falcons and head coach/athletic director Bob Reasso.

Reasso presided over yesterday’s event, thanking the school’s administration, faculty, staff and students for their support.

“There’s absolutely no way we could have done this without you,” Reasso declared. “We were the best supported team at the Final Four. The crowd that went there was fabulous. We had some fight-back wins in the tournament and none of that could have been possible without the passion from the stands.”

Reasso, who had a 29-year career at Rutgers University before returning to his alma mater in 2013, then introduced each member of the soccer team, to the delight of the crowd. A huge video screen provided photos of each player as he walked to mid-court.

The best was saved for last as top goal scorer Nathan Regis was introduced with his amazing resume.

Regis, a 6-2, 200-pound junior from Arima, Trinidad & Tobago, led the nation (all divisions) with 32 goals this season, giving him 61 in 65 career games at Pfeiffer. Regis also has 19 assists and 13 of his goals were game-winners.

The soft-spoken Regis was a cricket player as a youth before tragedy turned him toward soccer. Regis’ father, Anslem, a taxi-driver in Arima, was murdered on the job when Nathan was just 11 years old.

“I made the transition to soccer because my father loved soccer and that was a way to honor him,” said Regis, who played high school and prep school soccer back home before coming to Pfeiffer three years ago.

“That was my first trip to American, when I came here to Pfeiffer,” said Regis, whose mother, Eule, has still not seen him play in college.

Regis hopes to play professional soccer but not before next year, when as a senior, he hopes to lead the Falcons to back-to-back national titles.

“We broke some records last season (2014) for consecutive wins and we just built upon that,” said Regis. “The guys came back with an even bigger effort than last year, it was easy to kind of have that motivation to prosper and we did so … and we have a great coach, too.”

Believe it or not, Pfeiffer has no seniors on this championship team. They could run the table again next year.

Roughly half of Pfeiffer’s 33-man roster are from foreign lands such as Spain, Mexico, Chile, Columbia, Portugal, Brazil and France, in addition Trinidad & Tobago.

According to Reasso, the foreign presence is no accident.

“That’s D2 soccer,” said Reasso, now 52-13-2 in three seasons at Pfeiffer. “It didn’t take me too long to realize that everybody lines up 9 or 10 foreigners against you, so if we wanted to win, we had to go in the same direction. We have a lot of good North Carolina kids as well but we wanted to make sure that we could be competitive and let’s face it, as a college coach of 30-35 years, you’re always chasing this (national title).”

Reasso, who now has 417 wins as a college head coach between Rutgers and Pfeiffer, had guided the Scarlet Knights to the 1990 Division I championship game before falling to UCLA on penalty kicks.

The Falcons gave him a long-awaited national championship last Saturday.

“I definitely had the itch to coach again when I came here three years ago,” said Reasso. “You know, every time I lined up my team at Rutgers, the goal was to win the national championship. Last year, I told our guys I didn’t think they were ready and this year I told them they had the opportunity, so let’s go try to do it.”

“Nobody wakes up in the morning and says let’s go undefeated, that’s really dreaming,” continued Reasso. “But they’re such a great group of guys who love each other and the community and the university. It is a very special time.”

“It’s been unbelievable,” said Siaj, whose brother, Jaime, scored the game-winning goal in the national semifinal win. “We did not expect a perfect season and the trophies that we have won but next year, we go for another one.”

One of the compelling story lines of the 2015-16 prep basketball season is that the county’s two smallest schools have... read more