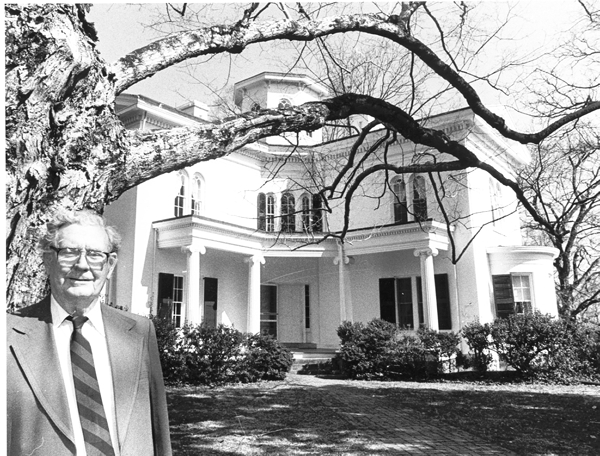 From one squire to another: Cooleemee Plantation will be in good hands

It’s hard to imagine a better outcome for the Cooleemee Plantation. The 2,033-acre plantation, held for nearly two centuries of generations of the Hairston family since 1817, has been sold to Davie County’s outstanding farmer Spurgeon Foster.

Over the years, Foster has developed a reputation for producing more corn, soybeans, wheat and grain per acre than anyone in this area. His big tractors and combines start early and finish late. His vigor and industry are just what the old plantation needs.

Foster plans to log the pine trees off much of the plantation and convert those forests back into agricultural fields.  Motorists along U.S. 64 near the Yadkin River will soon be treated to a two-mile vista of rolling corn fields in summer months. For years Foster has grown corn in the river bottom land on the plantation. He is now the plantation squire — one that drives a monster tractor.

The plantation once encompassed 4,000 acres and had 300 slaves — Davie County’s only significant pre-Civil War plantation. The acreage had been slowly whittled away over the years.

The Peter Hairston Jr. family faced the same difficulty encountered by many non-farming landowners: How to  make enough money off agricultural land to pay the taxes and bills. The plantation could have been sold to developers who would have carved it into hundreds of mini-estates. Instead, a genuine farmer is the new owner, one with sons and grandchildren to carry on the farming enterprise into another generation and even beyond.

Foster will easily convert the forests into corn fields. He knows that business well.

He is less familiar, however, with the other aspect of his $8.1 million purchase: What to do with the elegant antebellum manor built in 1855 and one of the finest examples of a plantation home in the Piedmont. Built in the form of a Greek cross, the 12-room, 50-foot high plantation is richly detailed. It was built with 300,000 bricks made on the plantation. The manor made the news a few years back when a burglar stole silver spoons made by colonial silversmith Paul Revere.

Historians need not worry about the manor’s future under the new owner.

Spurgeon Foster has a hard-earned reputation of taking care of his equipment and land. Casual observers have long noted that his tractors and combines are kept meticulously clean despite their work in clouds of dust. He constantly trims hedges and encroaching trees away from the fields. Road banks along his fields are well groomed. He spends a lot of money and time on maintenance. He will no doubt take similar care of the Cooleemee Plantation manor.

The sale had been in the works for months. It took surveyors a long time to map the property. The old deeds directed surveyors to trees and stumps and rocks that were prominent landmarks 200 years ago but no longer.

Cooleemee Plantation before the war produced tobacco and cotton. The late historian James Wall noted the difficulty in getting the crops to market, a setback that spawned a failed plan to make the Yadkin River navigable.

Spurgeon Foster won’t have to deal with those woes.

We look forward to seeing the plantation lands turned into full production, yielding more corn and soybeans and wheat and grains than ever

Dwight Sparks is editor and publisher of the Davie Couny Enterprise Record and the Clemmons Courier.

Awaiting more answers of substance on gun violence I would like to commend Josh Bergeron for his informative column (in... read more