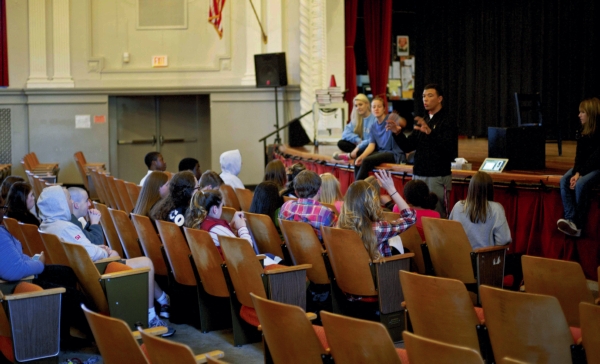 Salisbury High School student Tarik Woods leads an after-school discussion among students from other Rowan-Salisbury high schools in order to build relationships between students across the county. The group meet in the auditorium at Salisbury High school recently to plan an activity for students to attend. Jon C. Lakey/Salisbury Post

For those who haven’t heard, I will no longer be the education reporter. I will be reporting on city government and business from now on.

To everyone I have worked with and met reporting on education, I say farewell. Although I am sure our paths will cross in the future, it’s still kind of sad knowing I won’t be connecting with you on a regular basis. It was honestly a pleasure working with all of you. Everyone was so welcoming and willing to orient me to what was going on at meetings and events. I appreciate you all bearing with me as I learned the ropes.

To everyone I will meet and have already met on the city government and business beat, I am looking forward to all of the articles to come.

For my last column as an education reporter, I wanted to share the great work the Rowan County Student Leaders and Student Government Associations of different area high schools are doing to improve school-to-school relations in the county.

According to different SGA leaders from across the county, a lack of communication and segregation are keeping high school students in Rowan County from coming together for the good of the community.

RCSL is an organization that gets students involved in community-centered activities, such as dodge ball tournaments, to raise money for local nonprofit organizations, middle school mentoring and literacy programs and high school tutoring programs.

In October, the group also hosted a debate for the candidates who ran for the Salisbury City Council.

The goal of the conference was to come up with an idea for a county-wide event that all high students could attend. Tariq Woods, president of RCSL, asked the students why there is such a lack of participation for fundraising events and why different schools could not join forces.

Many said it was because students simply did not know about all of the different events going on in the county.

Interestingly, students brought up the racial segregation and cliques they witness at schools as another reason why there is a lack of participation.

The students talked about how some groups may not feel welcomed at certain school events and how to address that issue.

For example, one student talked about going up to a group of students at a game and asking them why they did not sit in the student section. They said they did not know they could.

Some suggested approaching the different groups and inviting them personally to different events.

“There’s just such a disconnect. And that disconnect is directly related, I think, to the tensions between the students,” Woods said.

Woods said before RCSL starts a new mentoring program, he thought high school students needed to work on themselves first.

“I felt that it was kind of necessary for us to get in touch with ourselves and participate with each other and figure out what we’re doing before we can separate and find middle and elementary students to mentor,” he said.

Woods said there are tensions between schools that run deep.

“It starts with what school you go to and it ends with I don’t like you because of it,” he said.

As far as school-to-school participation, Woods said one of the only times schools get together is for athletic events.

To help change that, the students at the conference split up into small groups and discussed what the best event to organize would be.

After voting on the different ideas near the end of the meeting, a county-wide dance won the most votes.

Now, RCSL will work to make the dance a reality.

Woods said it is important for schools to put tensions aside and work together, like they did that night.

“We should all be students working together towards one common goal,” Woods said.