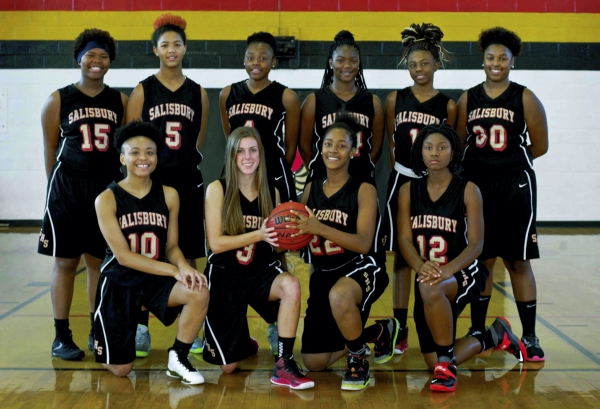 SALISBURY — After winning just 12 of 48 games during her first two years at the helm, Salisbury girls basketball coach Lakai Brice is looking forward to more success, hopefully sooner than later.
But it won’t be easy, as the Hornets feature six new players, including two freshmen.
“Yes, we are starting over — again,” sighed Brice. “But I love my team. They’ve been working extremely hard.”
The good news may be that while the Hornets are young, they may actually be better.
The two freshmen — Bryanna Troutman and Tacorra Robinson — should be starters right out of the gate.
Troutman, a 5-foot-8 guard with great ability, made a name for herself in middle school and now it’s time to see what she can do at the next level.
“Troutman was awesome at Knox, but right now, she’s one-dimensional,” said Brice. “Bryanna’s just a scorer but she’s not in middle school anymore, so now she’s got to play defense and it’s our job to teach her.”
Robinson is a 5-7 wing and slated to be the second freshman starter.
Returning starters are guards Maria Capito and Tyzarea Alexander. Capito, a 5-5 sophomore, averaged 7.4 points per game last season and earned All-CCC honors as a freshman. Alexander, a 5-6 junior, averaged 8.0 points per game.
Mystjkal Phifer, a 5-7 junior wing, rounds out the likely starting lineup for Salisbury.
Abriecyus Howard, a 5-8 forward, is a senior transfer and should contribute. Brice said that Howard “has some height and should be a strong rebounder.”
Deztane Hightower, a 5-7 junior forward, played last year as well and will see playing time.
Other new players include junior Heavenly Robinson, a 5-7 wing; Mariah Glenn, a 5-6 sophomore forward; and Ke’shaia Daniels, a 5-7 sophomore forward.
There is plenty of room for improvement on offense for the Hornets. Last season, Salisbury averaged just 39.8 points per game, the lowest for a Hornet team since 2001-02.
That was before the great Salisbury teams starting winning state championships, which Brice is using for inspiration.
“We look at those four pictures (championship teams) on the wall every day before practice, just so we can be reminded of what those teams built here,” added Brice. “The biggest thing already about these girls is that they’ve committed to each other, the program and the team, which is huge for us.”
Brice said that her team has “one goal, one team, one dream. One goal is that we need to improve every day in practice, we have to be better than we were yesterday. One team means that we have to have commitment to the program, and one dream is getting back to the old Salisbury High winning tradition. We have to start winning some games.”
These young Hornets may be too young to remember the glory days but they can be inspired by their coach.
Brice, from Burlington Township, N.J., arrived in Salisbury in 1997 as a freshman basketball player at Catawba College. She became an all-time great for the Indians and played three years of professional basketball in France.
Brice never dreamed in 1997 that she would become a Salisbury resident, but “I always wanted to coach and that’s what I want to give to my girls.”
She has been full-time with the City of Salisbury (Parks and Recreation) for 11 years and began her coaching career at North Hills Christian School six years ago.
So call it rebuilding or starting over if you must, but this year’s edition of the Salisbury Hornets might just be better than expected.

PLAYERS TO WATCH:
Bryanna Troutman, a freshman with skills that may lead the young Hornets in scoring.
Maria Capito, a sophomore who is a returning all-conference performer.
Tyzarea Alexander, a junior who has the highest scoring average (8.0) of the players who returned this season.
Tacorra Robinson, another freshman who is good enough to start right away.