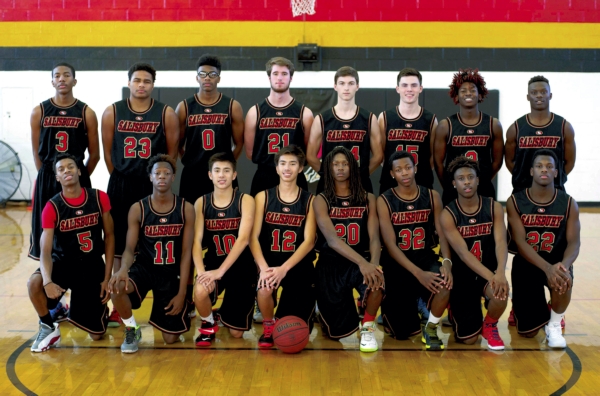 SALISBURY — Bryan Withers may have returned “home” just at the right time.
Withers, a Salisbury alum who was a star player on a Salisbury state championship team, is the Hornets’ new boys basketball coach, after leading the South Rowan program for several years.
Withers inherits a solid and veteran team that should challenge for the Central Carolina Conference championship at the least.
“Yes, we have some experience,” said Withers. “We’re blessed to have a good nucleus of kids who have played here, especially the group of seniors.”
Three of the five seniors are returning starters — point guard DeShawn Troutman, power forward DJ Alexander and center Wes Fazia.
Troutman averaged 16.3 points per game a year ago and was voted first team All-Rowan County. He has 818 career points.
Alexander may be known more for his football exploits, but the 6-5 hulk was second team all-county last year when he averaged 13.6 points per game. Alexander has 790 career points and a bunch of rebounds.
Fazia, a 6-7 beast who has played varsity since he was a freshman, averaged 10.7 points per game in 2014-15 and was a leading rebounder. Fazia has scored 586 points in his solid career.
The other returning starter is junior center/forward Tre Oats, who averaged 7.9 points per game last year but will surely add to that total this season.
Senior twin brothers Alex and John Yang, guards, should be key reserves for Salisbury, as well as junior shooting guard Will Leckonby.
Leckonby came off the bench as a sophomore last season and scored 5.1 points per game. Alex Yang followed closely in the scoring column with 4.5 points per game.
The new ingredient for the Hornets this season should be the fifth starter. Isaac Baker, a sophomore guard, transferred from East Rowan and immediately impressed Withers.
“We’ll have two great guards in Troutman and Baker,” said Withers. “Both of them can do a lot of things and that’s putting two point guards on the floor at the same time. Also, Will Leckonby shoots the ball extremely well.
“On the inside, you have Oats, Alexander, Fazia and (Zae) Harris,” continued Withers, “and those guys are really interchangeable.”
In addition to Baker, newcomers include juniors Tywun Rivens, DeAndre Rankin, Mike Hughes and Cameron Horne; and sophomores Oshaun Robinson, Elijah Moss and Jaquan Davis.
Withers said that the roster may look a little big (16 players) early, but some may go to the jayvee squad at some point.
“We will easily be 10-deep,” said Withers, confidently. “One of my rules is that if you play hard, you shouldn’t be able to go more than four minutes — if you’re giving me everything that you have. Therefore, somebody else comes in and you get a break … that uses more players and holds everyone accountable.”
Another reason Withers may need to sub often is the planned fast-paced attack.
“We have the athletes to play more up tempo but what I also want this group of guys to learn is how to play in a half-court set,” he said. You have to be able to do both because you may go up against a team that can slow you down from the run, so you’d better be able to still score.”
It is obvious that while this is Withers’ first year at Salisbury, it’s not his first rodeo and he’s learned from prior experiences, both good and bad.
“I’m happy to be back at Salisbury and real excited about the year,” continued Withers. “The biggest thing we’re working on is mental toughness. I challenge them every day. No matter what happens, we have to fight through it.
“And I am trying to help the team understand that this is not a sprint,” added Withers. “The year is a marathon. They’re learning about me and I’m learning about them, so early in the year, I don’t look for it to be perfect. You don’t want to be perfect right now … you want to be playing your best at the right time of the year and that’s at the end.”
Again, the intersection of Withers’ return with the talents of an experienced Salisbury roster, could lead to a special season for the Hornets.

PLAYERS TO WATCH:
DeShawn Troutman, senior guard who can do it all for the Hornets.
DJ Alexander, senior forward who will be hard to handle inside.
Wes Fazia, senior center is another tree inside that will make things difficult for opponents.
Tre Oats, junior post player who, along with Fazia and Alexander, gives Salisbury a three-headed monster inside.
Isaac Baker, sophomore transfer guard who has looked great in the early games.