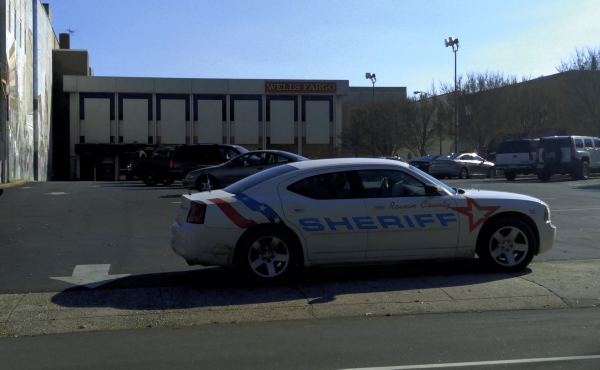 “I’m going to have to ask you to please move your car,” a Rowan Sheriff’s deputy could be overheard saying to a woman walking across the parking lot located at the back of Wells Fargo on South Main Street.

“Why?” she questioned him.

“The parking lot is for Wells Fargo customers,” the deputy said.

The exchange is exactly why motorists and customers alike have seen a Rowan County Sheriff’s deputy patrol vehicle stationed at the end of the parking lot, which borders West Fisher and South Church streets, and a deputy at the entrance.

There have been a number of cars parked in the lot whose owners aren’t bank customers, leaving bank customers in search of parking further from the bank, explained Josh Dunn, a corporate communications manager with Wells Fargo.

Dunn said the bank was having issues, and because their customers’ safety is one of the biggest priorities, they felt it was necessary to ensure the parking spaces were available for Wells Fargo customers and employees.

“It was something we’ve decided we needed to address,” Dunn said.

He said the officer is there to help with the safety of the bank’s team members and customers. He said the bank is not asking to have vehicles towed or tickets or citations issued, but just asking if the people parked in the spaces are Wells Fargo customers.

Dunn said the bank is also working with other downtown businesses to remedy the situation. He said people are free to park in the private lot after hours.

There was no specific complaint, Dunn said, but the bank did want to make sure nothing happened that would jeopardize a customer or employee’s safety.

The bank has already received positive feedback from some customers thanking the bank for the officer’s presence.

The bank reached out to a national company, Off-Duty Services, which provides security needs for businesses throughout the U.S. The company hires off-duty law enforcement officers in the jurisdiction where there is a need for security.

Most days the officers work from 10 a.m. until around 2:30 p.m., but hours may vary on some days, Sifford said.

Kannapolis council hears what revitalized downtown could include