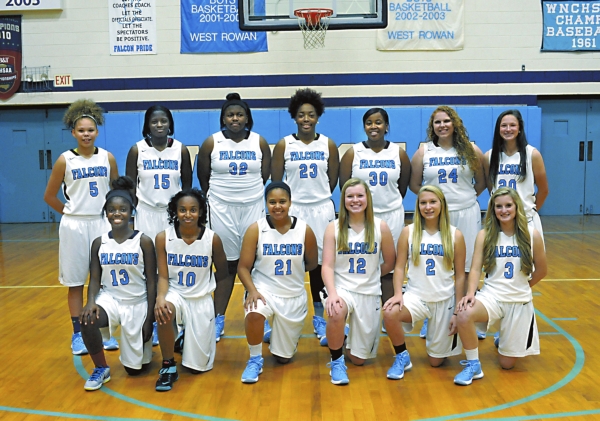 MOUNT ULLA — Opportunity is once again knocking on West Rowan’s door — and this time the rest of the SPC can hear it.
“We’re ready to make some noise,” noted third-year coach Ashley Poole. “It’s a different dynamic than last year. We’re different in a positive way.”
Different because the Falcons return only six players from a team that went 10-15 overall, 8-8 in conference and was drummed out of last winter’s 3A state playoffs in the first round. The good news is four quality veterans — including Egypt Alexander, who transferred from North Rowan — will suit up.
“We’re really guard-heavy,” said Poole. “But we’ll overcome that because we’re so quick. I think we’ll be able to run with most teams. The chemistry is there, the leadership is there. We’ve got a determined group of seniors this year.”
None will draw more attention than Khaila Hall, the 5-10 guard who surpassed 1,000 career points last season and has committed to Division I Longwood University in Virginia.
A crystal baller recognized as an all-county, all-conference and all-district, Hall averaged 15.7 points per game, reached double figures 21 times and netted a career-high 34 in a had-to-have-it, late-season win against Central Cabarrus.
“It all revolves around her,” Poole said.
Alexander, a 5-9 sophomore forward, is a chief reason Poole is so high on the Falcons.
“Her presence around the goal is unbelievable,” the coach said. “She can catch, receive, rebound and finish. We need her in every play.”
Returning in West’s backcourt is 5-foot senior Taylor Martin, an all-conference pick last year. Poole called her “five feet of pure energy,” and added: “She’s my sparkplug. If we need to get going, she’s the one who will make it happen, whether it’s on offense or defense.”
West also has a steady-as-she-goes post player in 5-8 senior Shanice Miller. She brings vocal leadership that every successful team needs.
“What she does, the other four seniors don’t do,” Poole said. “She tells it like it is.”
Of course there are a few holes West will need to patch in its push north in the standings. Poole isn’t turning cartwheels over the Falcons’ penchant for the fast break.
“Based on our scrimmages, we transitioned very well but we did not run our offense like I would have hoped,” she said. “When it came to running a set offense they didn’t do a good job. They’re quick, and they like to play quick. I want us to be a little less reckless.”
Warts and all, West remains part of the league title conversation — if only because of Hall.
“I feel fantastic,” Poole said, chirping a familiar melody. “And as long as these girls keep showing up and working hard, things are going to work out.”

Khaila Hall, senior guard: After three years of eyeing the throne, she’s finally the first lady of Rowan County basketball. Uses her elastic frame to do it all with flair. Begins the season with 1,041 career points. Was fourth on the county scoring list a year ago.
Egypt Alexander, sophomore forward: Transferred from North Rowan, where she proved she belongs at the big kids’ table. Poole thinks she’ll routinely chart double-doubles.
“If not, I will be disappointed,” she said.
Taylor Martin, senior guard: Economy-sized catalyst personifies the team’s heart and soul. She looks and plays like a Porsche — turbo-charged and sporty — and can sling 3-pointers from anywhere on the court.
Shanice Miller, senior post: May be a bit undersized for the rugged SPC but makes the Falcons both resourceful and scary. An unselfish, get-it-done role player, she understands this senior-laden team will eventually reach its sell-by date.