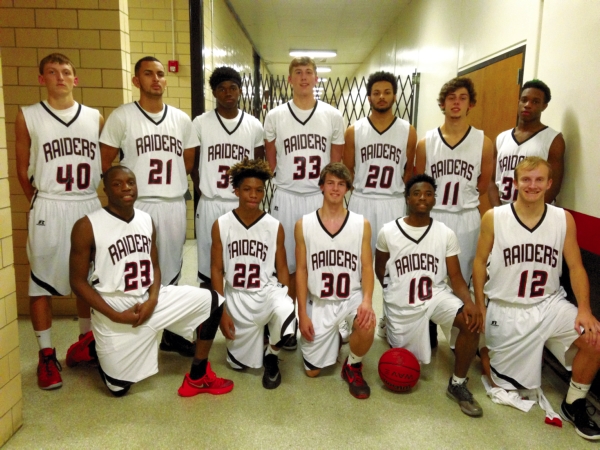 South Rowan has finished eighth and seventh in the two seasons since West Rowan, Carson, East Rowan and South joined the Cabarrus schools in the remodeled 3A South Piedmont Conference.
It’s going to be difficult to match that modest level of success this time. The SPC now has 10 teams, with talented Robinson moving down from 4A. All nine SPC opponents have more experience and firepower than South does.
South probably won’t be favored in a league game. That doesn’t mean the Raiders will lose them all, but any wins they manage to pull off will be upsets.
South had three very talented players a year ago — Lavon Hill, Qwan Rhyne and Tireek Wilder. With those three seniors leading the way, they managed seven wins, including five in the league.
Also missing is last season’s No. 4 scorer Tyler Rary, an athlete who also plays football and baseball. Rary elected not to play basketball this season.
That leaves seniors Colson Childers, Trevious “Tre” Littlejohn and Donte Hill (Lavon’s little brother), all of whom played significant minutes a year ago. They will be the core group for rookie head coach Andre McCain’s first varsity team.
McCain, who played at West Rowan and assisted Brian Perry at Carson, has replaced Bryan Withers at the helm of the Raiders. Withers coached South three seasons before returning home to Salisbury.
The 6-foot-1 Childers (4.3 points per game) has decent size and a solid stroke from the 3-point line. He’ll be in a forward role for the undersized Raiders, and he’ll have to help on the boards.
While the 5-foot-9 Littlejohn (4.3 ppg.) and the 5-7 Hill (2.6 ppg) don’t provide many inches, they do give McCain some quickness.
There are four more seniors on the roster.
Shooter Hunter Butler was on the team a year ago but didn’t play much. Justin Greer is raw and inexperienced, but he’s also 6-5, so he’s going to get chances to help.
Heath Barringer, the football quarterback, hasn’t played basketball in a while, but he’ll help defensively and he can handle the ball. He’s quick and he has a good head on his shoulders.
“Heath will do a lot of little things,” McCain said. “He’s blue collar. He’ll take a charge.”
The seventh senior is the wild card. Ian Bradshaw is a 6-2 player who will be a forward for the Raiders. He joined the team after the season started.
Bradshaw played at North Hills Christian, and then at East Rowan. Things didn’t work out for him with the Mustangs last season, but he did score in double figures three times before Christmas. If he fits in with his new teammates, he has the potential to be South’s leading scorer. He’s smooth, he can shoot, and he can score inside and out.
South has only two juniors, Tyler Peacock and 6-3 Wesley Clodfelter. They’ll be asked to bang and rebound.
There’s enough talent in the sophomore class that there’s hope for the future, especially after South moves down to 2A when the current sophomores are seniors. Those sophs include 6-4 Tyrese Shaver, Marquis Rhyne (Qwan’s brother) and Jaqwon “Amod” Hester.
If South played in an ordinary league, it might be thinking about striving for the middle of the pack. But in the loaded SPC, the Raiders will just be trying to survive.
South’s first three SPC games were lopsided losses — 79-44, 77-46 and 77-43. There will be more tough nights ahead. There’s no way around it.
The big challenge for McCain is that he’s in an obvious rebuilding situation, but his team has seven seniors. He wants to to give those seniors every chance to make their mark.
“It’s their last go-round,” McCain said. “I want them to leave their stamp and lay a foundation for the future.”

Players to Watch
Tyrese Shaver, Soph. — He’s going to be a finisher inside. He scored 16 opening night against North Rowan.
Colson Childers, Sr. — About 75 percent of his shot attempts will be 3-pointers. He scored 18 against Carson last season and tossed in 10 against Central Cabarrus.
Tre Littlejohn, Sr. — Extremely quick, he’ll create havoc defensively and get to the rim on offense. It’s hard to stay in front of him without fouling him. He had 10-point outings against Davie and East Rowan last season.
Ian Bradshaw, Sr. — Bradshaw has the most scoring potential of anyone on the roster. Playing for East Rowan last season, he scored 15 against Salisbury, 16 against Central Davidson, and 13 against Hickory Ridge.