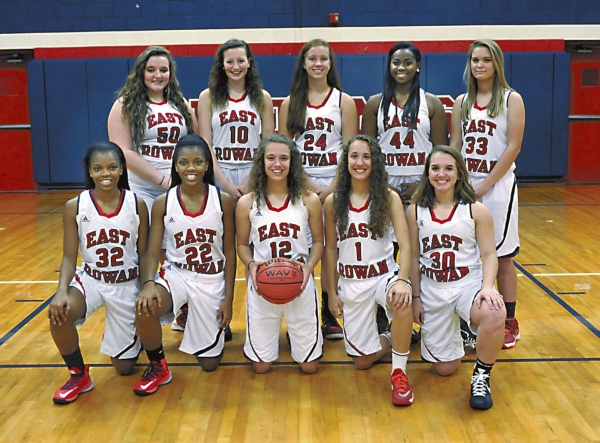 GRANITE QUARRY – After searching the campus high and low, East Rowan girls basketball coach Danielle Porter has determined there are no more 6-4 dominating centers available. Since post players Karleigh Wike and Kelli Fisher have taken their talents to Division I college programs, the Mustangs will now try a different approach to maintain their remarkable level of success.
The presence of Wike and Fisher in the middle produced back-to-back 22-4 seasons, one South Piedmont Conference regular-season title, one SPC tourney title and one Sam Moir Christmas Classic championship. But don’t despair for the Mustang girls.
“The kind of basketball we are going to play this year is more my mentality and style anyway,” says Porter, as she enters her sixth season as head coach. “We will be very aggressive, play full court defense and be quick in transition. With the big girls we have had in the past, we had to slow the tempo down and get it in to them. We won a lot of games and titles with them but this will be a different style and tempo, which will be exciting basketball to watch.”
The Mustangs will be an outside-in team featuring point guard Jocelyn Lowe and the hyper-quick mirror image twins, Shenelle and Shenique Pharr. The inside cupboard is not bare as state high jump champion Brittany Small (5-11) has returned to the varsity court. East also has Melonye McCree (5-10) who missed all of last season with a knee injury. Add talented freshman Lauren Weisensel (5-10) and juniors Micah Loper (5-10) and Courtney Wagner (5-9) and the Mustangs have some true depth in the front court.
Providing depth and quality minutes on the perimeter and wings will be senior Shelby Lowe (Jocelyn’s triplet sister) and sophomore Hollie Harrison, a back-up point guard who has already contributed this season.
Leading the offensive and defensive attack and the transition game will be the Pharr twins who are in their fourth varsity seasons. “They complement each other so well,” Porter said.
They are the top two returning scorers for East and provide extreme quickness on both ends.
“I am really looking forward to this team,” Porter said. “I know what they are capable of and what they are going to give me every day. We are going to use our speed and our experience and we are going to make another run at it.”
The Mustangs started 2-1 with a sweep of a tough North Stanly team, followed by a disappointing loss to Cox Mill in their SPC opener. A poor shooting night led to that loss.

East Rowan Players To Watch:
Jocelyn Lowe: 5-8, Sr. PG –The quarterback of the team averaged 5.3 ppg last season but Coach Porter notes her mentality is “always assist first.”
Shenique Pharr: 5-7 Sr. W – Now in her fourth varsity season, averaging 9.8 ppg. last season, Shenique leads the fast break attack and is the team’s primary penetrator. She also provides weak-side rebounding strength, a key part of the East attack. “We have a good team this year and will rely on our speed, defense and our quickness,” Pharr said.
Shenell Pharr: 5-7 Sr. SG – Shenell is a fearless wing player who averaged 11.0 points last season, scoring in double figures 13 times. She has shown the ability to take over a game with a flurry of steals and points.
Brittany Small: 5-11 Sr. F-C – She is playing varsity basketball for the first time since her freshman year, having concentrated on volleyball and track. She’s a premium athlete and has signed a track scholarship with Liberty.
“She probably has the highest vertical leap we’ve had on our team in five or six years,” Porter said. “I’m going to try my best to get back into the flow quickly,” Small said. “I like to get inside and bang for the rebounds.”
Lauren Weisensel: 5-10 Fr. F-C – She may be a freshman, but Porter feels Weisensel’s maturity and versatility will enable her to contribute with quality minutes right away. The latest in a long line of Weisensel athletes at East Rowan, she played point guard in middle school but will be a forward for the Mustangs.
“She is physical and smart,” Porter said.