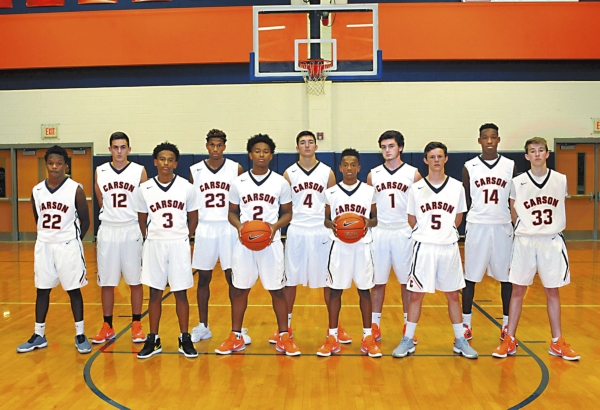 CHINA GROVE — You may be surprised to learn that Carson’s boys have won 27 of their last 35 games against Rowan County opponents.

Even last season, when the Cougars slid from 10-10 to 10-15 in the final, weather-plagued weeks, they managed to go 6-5 against Rowan opposition. They pulled out at least one victory against every Rowan County foe except North.

After losing Tre Williams, Colton Laws and MyQuon Stout, the 2014-15 season was a major rebuilding project for Brian Perry, the only head coach the Cougars have known since their gym opened for the 2006-07 season. Predictably, Carson plunged from 17 overall wins down to 10 and from eight South Piedmont Conference wins to seven.

Last season’s senior trio of Marquez McCain, Jonathan Rucker and Jacob Raper combined for almost 1,800 points in their varsity careers, so Carson has been hit hard by graduation for the second season in a row.

“This is only the second time in my 10 years that we don’t have a returning all-county or all-conference player,” Perry said.

Still, he’s optimistic the points Rucker, Raper and McCain scored can be replaced by a combination of improved veterans and talented sophomores.

Most of Carson’s team will be the current sophomore class. Most of them were successful jayvees last season when Perry called it “the best freshman class in school history.”

If all goes according to plan, Carson will hold its own this year, have a stronger team next season, and a terrific team the season after that.

Carson will be undersized for the SPC, but football star Ryan Bearden’s late decision to come out for the hoops squad will give the Cougars a chance to compete in the paint. The 6-foot-4 Bearden isn’t a big scorer, but he’s a physical rebounder and a shot-blocker.

Sophomore Jamarius Hairston (9.3 points per game) had his moments on the varsity a year ago. He and junior Brenden Westbrook (6.4) are the top returning scorers. Both are 6-3, long, lean and athletic.

“They’re going to have to eat the glass for us,” Perry said.

Three-sport athlete Owen White is a first-year varsity player and will be a starter. The sophomore is 6-1. He can shoot, he jumps well, and he doesn’t make many mistakes.

Freshman Cole Perry, Brian’s nephew, will be on the varsity. He can shoot.

The toughest obstacle for Carson is the league it plays in. Concord, Cox Mill, Hickory Ridge and Robinson are very strong, and Central Cabarrus and Northwest Cabarrus have looked much improved in the early games.

“It’s crazy how strong our league is,” Perry said. “We’re young and we’re small, but we’ve got to be prepared to play against some of the best in the state.”

Jamarious Hairston, Soph. — He’s very active on the glass and gets fouled frequently.

“He had a nice freshman year,” Perry said.

Brenden Westbrook, Jr. — Westbrook, a football cornerback, can score in a lot of ways.

“His athleticism has sky-rocketed,” Perry said. “He can really go to the rim.”

Armoni Hogue, Jr. — Carson’s other football cornerback, he’ll be counted on for tough defense and 8-10 points per game.

Malon Herron-Cuthbertson, Jr. — He could be the breakout guy for Carson. He’s a serious shooter and rained 3-pointers on Davie in a surprising, opening-night victory.

Owen White, Soph. — This is his third sport, but he’s good at it.

“He’s young but he understands the game, and as a football quarterback, he’s already got the respect of his teammates,” Perry said.