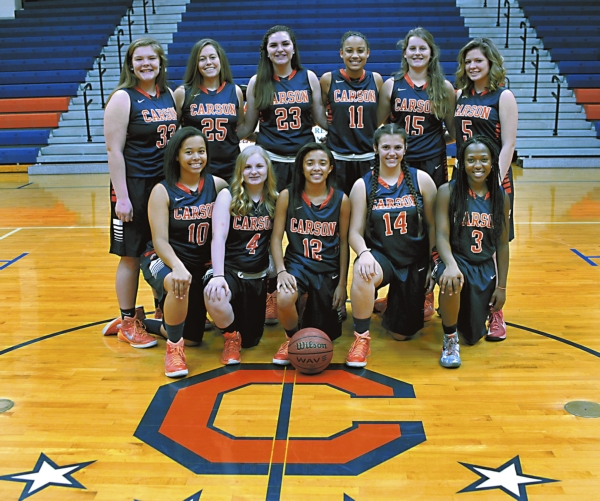 CHINA GROVE — The Carson girls weren’t great least season, but one thing you can say about the Cougars is that they come to play every night and they win the games they’re supposed to win.
They went 0-6 against the South Piedmont Conference’s top tier — South Rowan, East Rowan and Hickory Ridge — but the Cougars still managed to finish fourth in a nine-team league by going 9-1 against the bottom five.
Graduation losses were heavy — starters Alex Allen, Sydney Huffman and Crishona Roberson. Allen scored 1,149 career points and was one of the top players in school history. Combined, the missing trio accounted for 29 points per game.
Carson averaged 54 points per game, so coach Brooke Misenheimer has to replace more than half her scoring punch.
“We’re really young,” Misenheimer said. “Six sophomores and one freshman. But I like our team. I believe we’ll be 11 strong. All 11 can contribute.”
The only returner who’s a proven scorer is sophomore guard Olivia Gabriel, who turned in an exceptional freshman season and was second-team all-county. She’s a blur in the open floor and averaged 13.0 points per game on layups, free throws and the occasional 3-pointer.
She’s also a good passer, and a big component of Carson’s offense will be getting the ball off the defensive board and into Gabriel’s hands. The hope is that she can create a quick, easy bucket for herself or a hustling teammate.
“Olivia was a really good freshman, but there’s still a growing process,” Misenheimer said. “She better understands what the team needs now, and she’ll be able to slow things down as well as speed things up. We also have more people to run with her this year and that will give her opportunities for assists.”
One of the people running with Gabriel will be 5-foot-8 freshman McKenzie Gadson, who moved to the area in June from Florida.
“She was with us all summer and she can be a very special player,” Misenheimer said. “Good shooter. Long arms. She can finish around the basket. It’s the first time in my 10 years here that we’ve gotten a player like this unexpectedly.”
In addition to Gabriel, Carson has five returning varsity players — Taylor Wiggins, Maren Shumaker, Anne Marie Turney, Micah Furr and Kailie Ketchie. They all had good moments last year but all averaged in the neighborhood of 2.0 points per game.
They all bring different things to the table. All five are being counted on.
Wiggins is fast and creates steals and deflections. Turney is tall (5-10) and is Carson’s main presence in the paint. Furr is an accurate 3-point shooter. Ketchie and Shumaker fight for rebounds like they’re participating in a Mixed Martial Arts cage match.
Improvement across the board from that group can be expected because they all were young last season. It’s possible one or two of them will have a breakout year.
“They’ve worked hard in the offseason at developing their skills,” Misenheimer said. “They’ve all got a little more experience and a little more maturity.”
Moving up to the varsity are juniors Alijuandra Steet and Destiny Jackson (currently sidelined with a knee injury) and sophomores Sydney Taylor and Siera Fesperman. Street and Fesperman, one of the school’s top tennis players, will help defensively. Taylor has scoring potential. She’s small, but she has a nice-looking stroke.
“She’s money,” Misenheimer said. “She can knock open shots down.”

Players to Watch:
Olivia Gabriel, Soph. — She had her ups and downs as a varsity freshmen, but 325 points is nothing to sneeze at. She broke the school record for freshman scoring.
McKenzie Gadson, Freshman — Gadson has scored in double figures in four of Carson’s first five games, so it appears she’ll be as good as advertised. She gives Carson a chance to contend in the SPC. The SPC favorite is definitely Hickory Ridge, but Carson might be able to hang with everyone else.
Kailie Ketchie, Jr. — If you’re looking for a breakout candidate from the returning reserves, Ketchie is a good bet. Misenheimer said she’s improved her shot dramatically and she’s always in attack mode.
Micah Furr, Jr. — The SPC Golfer of the Year also can shoot basketballs. She’ll be a factor if teams play zone against the Cougars.
“She’s not just a high-percentage shooter, she’s really smart,” Misenheimer said.