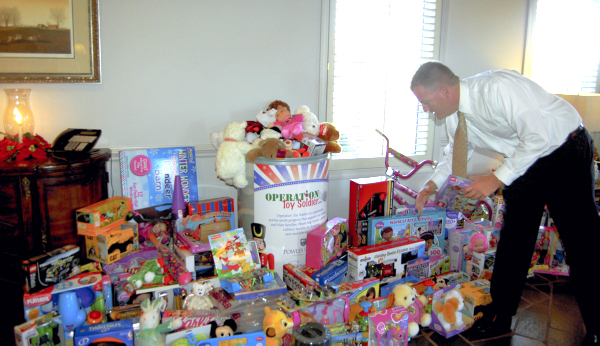 Amanda Raymond/Salisbury Post Powles Staton Funeral Home is collecting toys for Operation Toy Soldier until Dec. 17. The program collects toys for the families of deployed military servicemen and women. Funeral director Russ Roakes said he has received all sorts of toys, from Hot Wheels to a bicycle.

ROCKWELL — Russ Roakes, a funeral director at Powles Staton Funeral Home, said a man came into the funeral home last week and asked for some help unloading toys from his truck.

“I thought, you know, maybe a bag full of toys,” Roakes recalled. “His whole truck bed was full of toys.”

In the same week, the owner of Triangle Atlantic Casket Company donated five or six big bags of toys from Toys-R-Us after seeing the sign for the toy drive outside of the funeral home.

Powles Staton Funeral Home is collecting toys for Operation Toy Soldier this holiday season, and no toy is too big or small for the drive.

Operation Toy Soldier is a nationwide not-for-profit program that provides toys for the children of deployed military servicemen and women.

Roakes said the funeral home got the idea from being a part of Veterans Funeral Care, an organization of funeral homes that help promote veteran awareness.

“The times we’re in now, all the issues going on in the world, we want to give back to our veterans and our current military soldiers,” Roakes said.

The campaign started on Nov. 27 and will run through Dec. 17.

Powles Staton partnered with local businesses to put barrels around the county for community members to drop off their toy donations.

Any new, unwrapped toy will be accepted.

“We would be honored to work with any business or civic group or church in the community that would like to do this as one of their projects … and of course individuals,” Roakes said. “No question, they’re the backbone of the program.”

Roakes said the military soldiers are not the only ones who sacrifice for their country.

“Not only does a soldier sacrifice, but the family left at home is definitely sacrificing,” he said.

The program started last year. The funeral home only put out four barrels, but had a van full of toys to deliver to the United Service Organization in Charlotte.

“From doing it the first time, we really wanted to step it up this year and put more barrels out into the community,” he said.

This year, they have 20 barrels out in the community and have received toys from Hot Wheels to Barbie dolls to a bicycle.

Like last year, Roakes will deliver the toys to the USO in Charlotte for distribution to local military families. He hopes he will have to rent a U-Haul to deliver all of the toys.

If anyone in the community wants to donate toys but cannot get to a drop-off location, Roakes said he would go out and pick up the donations.

Roakes hopes Operation Toy Soldier can continue to be an annual event.

“This is definitely something we plan on doing every year from here on out,” he said.

You can donate new, unwrapped toys at the following locations until Dec. 17: