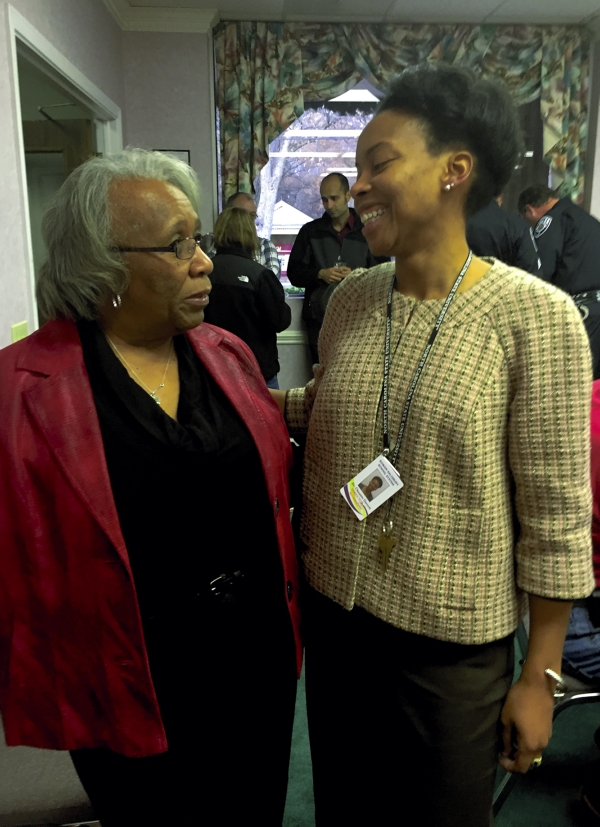 After 16 years of service, Alderwoman Mary Ponds decided not to run for reelection this year. Community members, like Chaunte' Garrett (right), director of accountability for the Rowan-Salisbury School System, came out to celebrate her service at the Granite Quarry Town Hall on Monday. Amanda Raymond/Salisbury Post After 16 years of service, Alderwoman Mary Ponds decided not to run for reelection this year. Community members came out to celebrate her service at the Granite Quarry Town Hall on Monday. Amanda Raymond/Salisbury Post

GRANITE QUARRY — Grateful, overwhelmed and humbled were the three words Mary Ponds used to describe her feelings about the reception organized for her to celebrate her years of service to Granite Quarry.

Community members, officials, servicemen, friends and family came together to celebrate Ponds’ 16 years of service on the Granite Quarry Town Board of Aldermen, with 14 of those years served as mayor.

Around 25-30 people dropped in and out to greet and talk with Ponds, including East Spencer Mayor Barbara Mallet, Paul Woodson, former mayor of Salisbury, and Salisbury Councilman Kenny Hardin.

“You never know how people see you or what level of respect people have for you until people have an opportunity to come and show it,” Ponds said.

People stood in line at the celebration to greet Ponds, and Ponds greeted every person like an old friend.

Mallett said Ponds helped her when she was a newly elected mayor.

Chaunte Garrett, director of accountability for the Rowan-Salisbury School System, said Ponds has always supported her, especially when she was new to the district.

“Ms. Ponds has been a great supporter of the school system, as well as myself,” she said.

As an African American government official in a town that is majority Caucasian, Ponds said the town has been very supportive of her time on the board and as mayor.

“For me to become a mayor for that many years and be on the board … and they continued to elect me, it speaks highly of Granite,” she said.

Granite Quarry Mayor Bill Feather said he will miss Ponds after working with her for so long.

“We’ve done a lot together. I’ve come to respect her very much,” he said. “It’s going to be like missing your second arm.”

“She loves the Lord and she’s been a good impact on people to build their lives, not just buildings and structures and whatnot. She really builds people’s lives,” he said.

“I think she’s going to be missed and her voice will be missed. I think she has a dimension that won’t be readily available,” Lee said.

Ponds said she will be spending more time with her family in the coming months, but she will always be involved in the well being of Granite Quarry.

County Commissioners on Monday finalized a lawsuit settlement with a former sheriff’s deputy and made significant changes to retirement policies.... read more