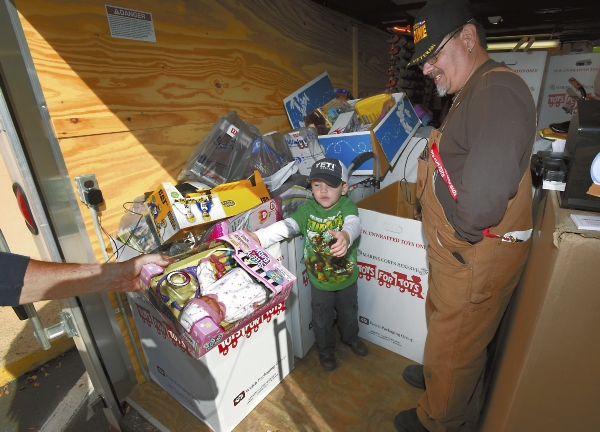 Four year old Carter Willis reaches for a toy doll from his grandfather J.T. Kluttz to place in the Toys for Tots truck that is stacked with toys. Project co-ordinator Arbe stands on the right. photo by Wayne Hinshaw, for the Salisbury Post

Toys for Tots fundraiser at Krispy Kreme a success

It’s the first donation at the Rowan Toys for Tots collection at Krispy Kreme. Every year in early December, the charity camps out in the donut chain’s parking lot, collecting toys and monetary donations for kids in need.

“That’s way ahead of what we had total last year,” he said.

Arbelaez thought the charity received more toy donations this year, as well, but would not have an official tally until later this week.

Arbelaez, a former Marine and local coordinator for Toys for Tots, goes all out for the Krispy Kreme collection. Normally, he sets up a Christmas tree and a tent on the roof of the building and stays all weekend.

This year, water and ice on the roof forced volunteers to stay grounded, but Arbelaez says they stayed at the location, sleeping in cars in case anyone dropped off late-night toys.

Every year, the Rowan County Toys for Tots gets 800 to 3,000 applications from families who are unable to provide their children with Christmas presents, Arbelaez says. Some years, meeting the demand has been a close call.

But in the 11 years he’s been with the charity, Arbelaez has ensured that no child on his list is without a gift come Christmas morning. With help from the Salisbury Police Department, the Christmas Bureau, local businesses and even a motorcycle group, he’s been able to make sure that every order is filled.

“I’ve got some amazing friends,” he said.

Every year, the Krispy Kreme dropoff partners with the Salisbury police and fire departments with police lights on the roof and officers and firemen chatting in front of the official Toys for Tots trailer. It works well, Abrelaez says. The flashing lights on top of the store catch people’s attention, and kids love to come and see the cars and trucks.

“It’s been a heck of a partnership,” Arbelaez said.

Every year, he makes some good friends with the volunteering officers, and says that the laughter and cheer attracts more people — the goal isn’t just to collect toys, it’s to bring a little bit of holiday spirit to anyone driving by.

It’s not an easy weekend. Arbelaez says it involves a lot of work and very little sleep — but he and the other volunteers know that work will pay off, come distribution day on Dec. 18.

“We don’t sit on our butts and wish for things,” he said. “We makes things happen.”

Arbelaez has sacrificed a lot for Toys for Tots. The campaign starts in October, and Arbelaez says that he doesn’t stop running until after Christmas. He hasn’t put up a Christmas tree in 11 years.

“Besides Marine Corps boot camp, this is the most strenuous three months of my life,” he said.

Every year, he thinks about handing the reins to someone else. But every year, he finds another reason to stay on, to keep working, to keep pushing.

“Doing this is addicting,” he said.

His dream is a world where Toys for Tots isn’t needed, and they can close up shop — a world where the Krispy Kreme parking lot is empty the first weekend of December. But until that day comes, Arbe will be there.

“As long as there’s a need, we’re going to be doing this,” he said.

While the Krispy Kreme collection is over, Toys for Tots will still be taking monetary and toy donations through distribution day on Dec. 18.

China Grove gets in the holiday spirit with elf contest

CHINA GROVE — A nationwide Christmas tradition is coming to the shelves of local businesses this week. Before Christmas every... read more