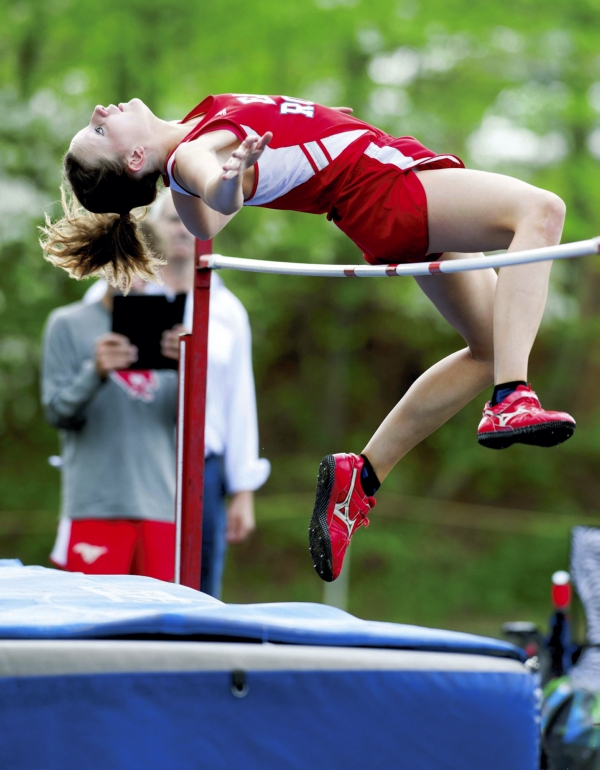 East Rowan’s Brittany Small in the high jump during the Rowan County Track and Field Championships on April 14. Small has signed with Liberty University.

GRANITE QUARRY — Liberty track and field coach Brant Tolsma is one of the world’s best 66-year-old athletes, and he’s coached 77 conference-championship teams in track and field and cross country.
So it’s fair to say he knows talent when he sees it. He sees a lot of it in East Rowan senior Brittany Small.
Small, one of the state’s top high jumpers, signed recently with Liberty, a Division I school in Lynchburg, Va.
“We’re excited about Brittany’s decision to join us,” Tolsma said. “She appears to be a wonderful fit with our unique mission at Liberty.”
Small’s natural spring gave her a chance to be a special athlete. Over the years, she’s shown the dedication necessary to develop the timing and technique needed to excel in the high jump.
She’s also not bad at 400 meters. She was sixth in the SPC in that event last spring.
“She’s just so athletic,” East coach Laurie Wyrick said. “She can do whatever she sets her mind to.”
Small also is an exceptional volleyball player. While she’s already been all-county three times in track and field, she’ll also be on this year’s all-county volleyball team for the third time.
Less than two hours after she won the indoor state championship in the high jump last winter, she was headed to a volleyball tournament in Washington, D.C. She really loves both sports.
“The toughest thing was whether to do track or volleyball in college,” Small said. “It was a really hard decision. I prayed about it a lot.”
Small, 5-foot-11, has finished sixth, second and fourth in the high jump in the three 3A state outdoor meets she’s competed in. She won the 3A state indoor meet as a junior by clearing 5 feet, 6 inches for the first time indoors. Her personal best outdoors also is 5-6.
Pat Poole’s East and county record (5 feet, 7 1/2 inches) has stood for more than three decades. Small will take aim at that long-standing mark again as her senior year unfolds.
Small first attempted the high jump in seventh grade. Her first coach was her older brother, Jamey, a track and football standout at East who went on to play wide receiver at Catawba. Jamey graduated from Catawba in 2009 and is now a football coach at Methodist.
Andy Eller became Brittany’s next coach. He’s advised her for years.
She’s had quite a career, including a trip to Australia for the Down Under Games in the summer of 2014.
That was an adventure that included a 13-hour flight from Texas to Australia, holding a koala, feeding a kangaroo, and snorkeling at Pearl Harbor. She also found time to high-jump 5-5 in Brisbane and win her age-group gold medal against international competition.
Finding the right college also was an adventure, but Liberty got the inside track on recruiting her because it hosts high-powered high school meets each year at the Tolsma Track Center.
“Liberty was a school I was interested in, and I sent an e-mail to let them know I was coming up there to compete,” Small said. “I really liked the facilities, the school and the coaches. I ended up going up there for meets three times. I’m interested in health sciences, and they have that major. It was just the place that felt right.”
Tolsma remembers his first encounter with Small.
“Our original contact with her was when she won one of the indoor high school meets that we host, and I believe she was attracted to the Christ-centered atmosphere at Liberty,” Tolsma said. She appears to be a competitor, but she also has a sweet, gentle spirit about her.”
That’s an accurate description of Small. The first thing you notice about her is that’s she’s tall. The second thing you notice is her vertical jump. The third thing you notice is that it’s very hard to find her without a smile on her face and a giggle in her voice.
Usually this time of year, Small is playing in Junior Olympic volleyball tournaments, but volleyball is behind her now, so she’s helping out East’s basketball team. She hasn’t played hoops since she was a freshman so she probably won’t score a lot, but she makes a huge impact on the boards. In the Mustangs’ first four games, she’s averaged 12.7 rebounds.
“Brittany is a great athlete,” East basketball coach Danielle Porter said. “She’s a fast learner, and we’re thrilled to have her.”