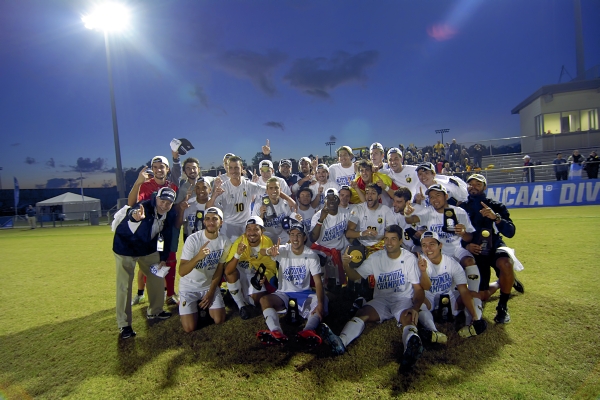 PENSACOLA, Fla. — “We Are UnFalconBelievable” was the catch phrase printed on the T-shirts worn by Pfeiffer University men’s soccer fans as they rooted on their beloved Falcons.

With a 4-0 victory over Cal Poly Pomona (17-3-3) in Saturday’s NCAA Division II Men’s Soccer Championship match, the Falcons certainly lived up to the T-shirt hype as they captured the program’s first-ever national title.

“It means a little bit more to me because this is my alma mater, and mostly because of the guys,” said head coach Bob Reasso, who graduated from Pfeiffer in 1973. “This is the best group of kids I’ve coached, bar none.”

The dominant win against the Broncos put an exclamation point on Pfeiffer’s perfect 25-0 season.

The Falcons became the first undefeated champion in Division II men’s soccer since Southern Connecticut State posted a 20-0 mark en route to winning it all in 1999. Only one other team in NCAA history has accomplished the incredible feat since the championship’s inception in 1972 — Lock Haven (21-0-0) in 1980.

Junior striker Nathan Regis netted two goals in the contest to increase his nation-leading total to 32. Regis, who also scored once in the Falcons’ semifinal victory Thursday, was voted Offensive Most Outstanding Player of the tournament.

“(My teammates) are very talented and selfless,” Regis said. “They don’t hog the ball at all. They distribute the ball and try to set up their teammates. Once you share the ball, it always gets back to you when it needs to. As a forward, you just have to keep making runs and distributing the ball and everything will come to you to finish.”

The Falcons struck quickly, netting two goals in the first 3:59 of the match.

Sophomore midfielder Jorge Buzzo sent a ball to the top of the box, connecting with Regis, who got the Falcons on the scoreboard in the 3rd minute.

Just 97 seconds later, sophomore midfielder Martim Galvao served up a beautiful pass from about 60 yards out to find sophomore forward Jaime Siaj, who finished it off to put the Falcons up 2-0. It was Siaj’s 17th goal of the year.

“We were able to get behind them early a couple times and I think (Regis’) and (Siaj’s) finish really set us off and gave us confidence,” Reasso said. “The first goal of the match always means so much.”

“When you get hit early, you kind of feel like you’re chasing the game the whole time,” said CPP senior forward Alexander Turkson.

The game settled down until the 61st minute of the contest when Regis broke away downfield and drew a penalty kick from a defender at the top of the box. On the penalty kick, he sent the goalkeeper the wrong way and snuck the ball by for his second tally of the game.

“As the game opened up, they had to chase the game by coming forward,” Reasso said. “They are a tremendous possession team, but we were able to get behind them again and that was the difference.”

Less than two minutes later, the Falcons put the game away as Siaj sent a pass to the left in space to Galvao, who booted the ball to the back of the net for the decisive 4-0 lead.

“They have many tools and many ways to affect the game,” said CPP head coach Yossi Raz.

“As a freshman, to play with these guys and win 25 games is unbelievable — it’s “UnFalconBelievable,’” Correa said.

The Falcons’ four goals were the second-most in an NCAA Division II championship game, and Pfeiffer recorded the first shutout in a title game since 2009. Pfeiffer outshot the Broncos 21-12.

“It’s exciting to be one of two teams playing on the last day of the season,” Raz said. “There are a lot of coaches and players who started this journey in August and only teams got the pleasure of playing for the national title. We just came up short.”