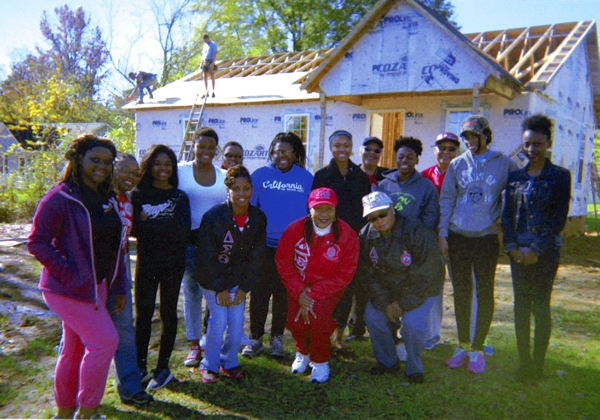 Deltas and GEMS on the building site at Union Heights Blvd.

The first project was assisting Habitat Home Builders with building two homes both on Union Heights Blvd. The ladies of the chapter supplied food, beverages and snacks as well as assisting with construction on the interior and exterior of both homes.

The third project was our annual partnership with Saint John’s Lutheran Church. The ladies of our local chapter collected, filled and donated shoe boxes filled with small toys, school supplies and hygiene items which in turn will be sent to Samaritan’s Purse, and finally delivered to needy children world wide.

Delta Sigma Theta Sorority is a public service sorority whose major programs are centered around a five-point programmatic thrust which are economic and educational development, physical/mental health, international and political awareness and involvement.

Dr. Stoner is director of public relations and Ruby Steele is president of the local chapter.

The East Rowan Class of 1965 celebrated its 50th reunion with a banquet at the Faith American Legion on Friday, Nov. 27. There were 132 classmates and guests and three former teachers present. Out-of-state guests came from Florida, Texas, Missouri, Georgia, South Carolina and Virginia. Linda Lefler Merrell was master of ceremonies.

Classmate Jim Park memorialized 33 classmates who were deceased. Classmates took turns at the microphone to bring the group up-to-date on their lives. A booklet of classmates’ information was distributed.

Several dozen door prizes were contributed by classmates, with the big prize of the evening being a framed Betty Sedberry print of Al’s Nighthawk, donated by Jamie Moose Kimmer. Each guest received a commemorative tea glass with an etching of the Mustang horse on them.

On Saturday morning, about 50 classmates and guests were given a tour of the East Rowan High School campus by Principal Julia Erdie. Afterwards, they enjoyed brunch at the home of Linda and Lanny Merrell on Crescent Road.

The ERHS Class of 1965 has held its reunion the Friday after Thanksgiving every five years.

Today at 2 p.m., a Memorial Service will be held downstairs for Salisbury Elks who have passed away. A 114-year tradition since 1901, it is a brief but memorable service acknowledging our common bond of brotherhood while celebrating their lives here on earth.

The service is open to the public and will be held downstairs at the lodge at 508 S Main St. Friends and family of departed Elks are especially invited.

The speaker for the service is PDDGER Harry Agner and Miss Hannah Addair will sing several music selections. Snacks and refreshments will follow and during that 45 minute time period the club room will be closed but reopens afterward.

KANNAPOLIS — The Kneeling Gardeners met on Nov. 23, at Trinity United Methodist Church. President Chris Wielandt presided, Jill Roach led devotions and guest speaker for the evening was Alice Moody on holiday décor. Moody brought pine and cedar boughs and pine cones from her yard. With the purchase of an inexpensive artificial wreath, she took bundles of the mixed greenery and tied them with the artificial greenery to make a fresh wreath. The pine cones were added with floral wire. When the greenery fades or looks sad, simply take out the dead and replace as needed until the holiday season is over. We learned how to tie bows for our wreaths; ten yards of ribbon would make two nice bows. Never let the spool of ribbon fall to the floor as you make the bow. Place the spool of ribbon on a table and pull from there so that the ribbon will not twist as you make the loops. Alice made it look so easy. After wreaths were made of several sizes plus two bows, Alice wired the wreaths together added the bows and sleigh bells, and made a one of a kind door decoration for the holidays.

Containers with styrofoam inside may be stacked in graduated sizes with long sticks and greenery with berries along with pine boughs to make a holiday container for the porch. She also encouraged us to do something wonderful on the porch and to light it.  What wonderful ideas at little to no cost with the things we might have around to revitalize our holiday décor. Thank you Alice Moody for being such as inspiration to us all. Refreshments were pot luck and Sylvia Foster provided the table arrangement and decorations. Anyone interested in gardening is invited to attend our January meeting. Josh Moose will be our speaker on “God’s Way of Gardening.”

Who are the Phoenix Readers?

Perhaps you have heard the Greek mythology term “phoenix arising from the ashes.”

Well, there’s a phoenix locally which arose from the mind of Dr. Jim Epperson, the former chair of the Theatre Arts Department and Dean of the School of Performing Arts at Catawba College. Since his retirement, Epperson has guest-directed several productions for Piedmont Players, Lee Street Theatre and St. Thomas Players. He now holds the title of Catawba College Faculty Emeritus.

Having taken courses in reader’s theatre technique in college and having taught readers theatre, Jim believed there was a talented pool of actors locally and an audience for reader’s theatre in our area. “I also thought the objectives of the Center for Faith & the Arts (the sponsoring organization) could be met by a senior’s reader theatre group.”

Dr. Epperson approached Jenny Hubbard (local award-winning author) with the idea. She then took the idea to the St. Thomas Players (a division of CFA) board, who bought into the idea, and “we were off and running,” said Epperson.

On a Sunday afternoon this past spring, open auditions were held to assemble the group. The qualifications for auditioning were (1) being able to read and (2) be at least fifty-five years of age.

By the end of the day, Dr. Epperson had put together a group of 12, six men and six women, who could complement one another with their individual skills in performing. Selected were Nick Bishop, Mike Cline, Ray Davies, Buddy Farnan, Robert Jones, Shawn Van Wallendael, Julie Cline, Kate Davis, Rebekah Hardison, Linda Jones, Mary Ann McCubbin and Becky Porter.

So, what exactly is reader’s theatre? Epperson defines it as “theatre of the mind, using practiced vocal technique and limited movement. The readers interpret various forms of literature in such a way that the audience visualizes the intent of the material.”

Through the generosity of donors, the Phoenix Readers group was able to purchase readers stands, stools and script binders, the only needed performance materials.

Epperson’s director duties now are using his knowledge and experience to create scripts and guide the actors.

Although performing since June, the group has shifted into high gear with their upcoming holiday program, aptly titled “A Phoenix Readers Christmas.” Performances will be held throughout Rowan and Cabarrus counties during December at libraries, churches and senior center venues. The programs runs about an hour, but can be adjusted to accommodate time constraints.

The response has been excellent, and only a few dates remain open. So if your group would like to host A Phoenix Readers Christmas, contact Kate Davis at kldavis302@gmail.com and The Phoenix Readers will be happy to perform for you.

And unlike most performing groups, the Phoenix Readers perform at no charge.

The Phoenix Readers most recent schedule: