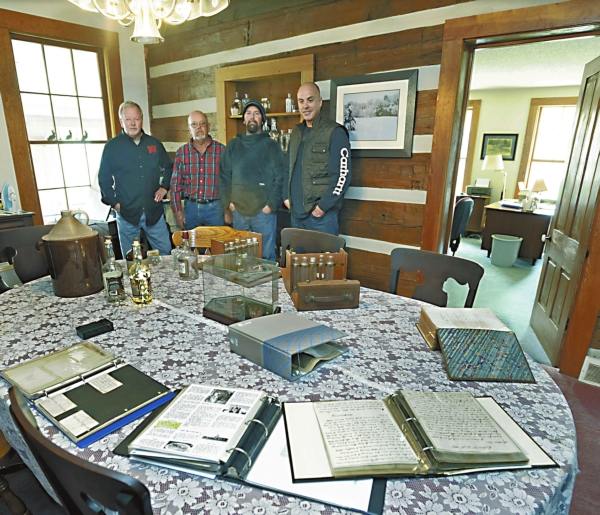 John Glen, Van, Zeb, and Matt stand against an original wall of the cabin that Old Nick built. There are various documents and original bottle on the table. . photo by Wayne Hinshaw, for the Salisbury Post

LEWISVILLE — With the recent relaxing of restrictions on distillery sales in North Carolina, new craft distilleries are cropping up across the state.

This column is going to provide you a look into the history at one of the oldest — if not the oldest — whiskey distilleries in North Carolina.

The Old Nick Williams Co. was first established in 1768 and closed during Prohibition. Last year, brothers Van and John Williams and their sons Zeb and Matt decided to reestablish the family distillery and make Carolina whiskey.

Van is a retired vocational education shop teacher who taught drafting and metal works.  John is an insurance agent. Matt is a paramedic for Baptist Hospital on their helicopter flights, and Zeb runs an advertising business.

In a June 9, 1935, Greensboro Daily News article, Hal Jarratt wrote these words: “This is a story, saga, if you prefer, of ‘Old Nick Williams,’ a family whiskey; a North Carolina product, which wisely or unwisely, became the household companion of peasant and kings.”  He refers to the peasants as the “plain people along the Yadkin River.”

The Williams family’s history of distilling whiskey began around 1690 when John Williams sailed from Wales to York County, Virginia. There are reports that he ran a distillery. Two generations later in 1766, Joseph Williams, at the age of 18 was given a land grant of 8,000 acres to relocate to North Carolina in what is now Lewisville in Forsyth County. The Yadkin River runs through the area.

It was here that Joseph Williams in 1768 formed Williams Distillery to make whiskey for his friends and family “for medicinal purposes and personal enjoyment,” according to family history. During the Revolutionary War, Joseph served as a colonel in the army of George Washington. He returned home a military hero and was called Colonel Joseph Williams until his death in 1827 when he was buried in the family’s Panther Creek Cemetery.

Joseph’s youngest child, Nicholas Lanier Williams, took over the distillery after his father’s death. He moved the distillery about a mile up the road on the banks of Panther Creek where he got his water for the distillery from behind two dams that still stand on the creek. There he built a two-story cabin for the family. At this site, the Williams family employed some 200 barrel makers, blacksmiths and farm workers.

Joseph introduced the new brand name of Old Nick in honor of his father. When Joseph died, son Nicholas Glen Williams took over the distillery. He changed the name to “Old Nick Distillery” and enlarged the operation. He began purchasing other raw whiskey from local stills, aging it for distribution.

Nicholas Glen was the extreme character in the Williams family traditions, living from 1865 until 1913. He always wore a black top hat and carried a cane with a small flask built into the handle for whiskey. It is Nicholas Glen, “Old Nick Williams” himself, that built the legend of the whiskey company.

It is sometimes hard to draw the line between history and legend, and Old Nick walked that line. One story is that he had the political influence to have the county line between Yadkin and Forsyth counties moved so his distillery on Panther Creek would stay in Yadkin because Forsyth had made it illegal to run a distillery. Current family members cannot confirm the story and doubt that it happened.

Old Nick was a trustee for the University of North Carolina. The Old Nick label was set up in 1893 at the World’s Fair in Chicago. Glen was invited to the Paris Exposition later, setting the stage for worldwide distribution.

Federal taxes on liquor were very high in the early 1900s. Old Nick was accused of federal tax evasion and tried in federal court and found guilty. He appealed all the way to the U.S. Supreme Court, where he lost again in 1905.

There is another story, fact or fiction, that Old Nick went to Winston-Salem and was confronted by a federal revenue agent. Old Nick dragged the agent into the street and whipped him with his buggy whip, so the story goes, yet was never charged with the assault. Who knows the facts here?

In 1908, it became illegal to sell whiskey in the state. Old Nick products then had to be distributed out of the state. Glen died in 1913 at the age of 48, leaving his wife with nine children, a 1,400-acre farm and 28,000 gallons of illegal whiskey. When national Prohibition was enacted, the remaining whiskey was destroyed and the distillery was closed down.

Fast forward  to the current generations. The Williams boys, Zeb and Matt, played in the woods when they were young, collecting old bottles where they had been bashed against trees to destroy the whiskey. On my visit, Zeb and Matt took me up in the woods to dig around in the leaves and find hundreds of shards of the original whiskey bottles.

During the renovation of the original family cabin, where family members still live today,  Old Nick’s safe was found under a stairway. That explained why that end of the floor was sagging — from the heavy weight.  In the safe were the company records for the distillery, sales receipts from all over the world, the original recipe for the whiskey and thank you letters from some prestigious customers.

They found handwritten letters from presidents Theodore Roosevelt, James Polk and James Buchanan praising the quality of the whiskey.

A letter from the N.C. Senate Chamber in Raleigh in 1893 to President Grover Cleveland recommends that Nicholas Glen Williams be appointed as U.S. marshal of the Western District of North Carolina. It is signed by state senators.

John Glen Williams said he and his brother Van — along with their sons Matt and Zeb — have been talking for years about starting the distillery back up. “It was time to go back to 1768,” John said.

Zeb said he wanted people to know theirs is real whiskey with no sugar added. The Old Nick recipe is a mixture of corn, wheat and barley. The starch and sugar from the corn provide the only sweetener. Old Nick whiskey is 158 proof.

The Williamses purchase their corn from an area farmer but hope to grow their own in the future. “We want to do everything the traditional way,” Zeb says.

Old Nick Whiskey is clear and colorless. John Glen wants everyone to understand his ancestors were never moonshiners. “They are up in the mountains,” he says. “We make Carolina whiskey.”

Currently, their Old Nick Whiskey is distilled at the Foothills Distillery in Conover with the Williams family going up there to see that the recipe is strictly followed. They hope to have their new distillery up and making whiskey back on Panther Creek in 10-12 months.

The Old Nick label is available in Rowan-Kannapolis ABC stores.

F.B. Aredell, a reporter for The News & Observer in Raleigh, wrote on March 22, 1903: “It is interesting to note how the  situation here today binds the present to the almost forgotten past. The same roof shelters Williams, the older, the same old oaks wave in the breezes that float over the mountain cliffs and cast their quiet shadows upon the same grassy lawns that were here in the long ago. The same old Pilot Mountain rises up in the distance, a towering sentinel in the midst of a grand army of picturesque peaks. The same old Yadkin River flows hard by singing the same old requiem of a century and more ago. The same old mountain highways wind around the same old fields and forest and guide traveler and friend to the same old Williams home.”