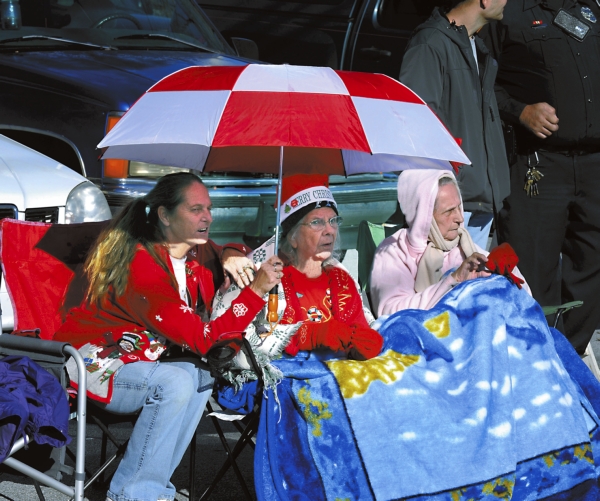 91 year old Elsie Miller in the center attended her first Christmas parade ever with Ruth Warren 77 on the right and her daughter-in-law Linda Miller on the left.. The Cleveland Christmas Parade. photo by Wayne Hinshaw, for the Salisbury Post

For the people of Cleveland, the town’s Christmas parade is a family affair. Mothers, fathers, children and grandparents line the streets, staking out a spot with a few folding chairs or blankets. Everyone seems to know each other here.

She and her husband, Barry, watch their two great-granddaughters race excitedly up and down the sidewalk. The Curlees have been watching the parade every year for the past twenty years. Even if it rains, like it did last year. Even if it snows.

Curlee says it’s one for the whole community, not just for her family. This is the parade’s forty-fourth year, and others agree that the Cleveland Christmas parade is just part of life.

Further up Main Street, the Hendrix family gathers on the porch of a family member, Scott Hendrix. The kids tumble across the lawn, or run inside for extra candy bags. They’ve got front row seats to the festivities. Scott says that the parade is “pretty much a community institution.”

Hendrix says he thinks the parade is an important piece of town life. You get to know people, you see your neighbors out and about. You can watch the generations shift and change as people grow older.

“People are changing now,” Hendrix said, “People are moving in. You gotta have events like this so you can meet people.”

As the sirens signal the start of the parade and the West Rowan marching band cranks up some holiday tunes, Elsie Miller watches the parade. Elsie is 91 and says this is the first time she’s been to a parade.

Glenda Miller, her daughter-in-law, says that Elsie loves Christmas. She took Elsie to get her photo taken with Santa the other week, and she loved it.

“She’s been really tickled by that picture,” Miller said.

Elsie is young at heart. Miller says she doesn’t use a cane or walker, and she’s been looking forward to the parade for weeks.

“She’s been excited since I told her about the parade,” Miller said.

Elsie lives next door to Miller and came knocking at her door earlier Saturday morning, ready to go. As the floats went by, Elsie clapped and cheered, waving at each person perched on the back of a truck, horse or leaning out of a car window. She held an umbrella to shield herself from the sun, and a boy from a family standing nearby scooped up candy that landed nearby and dropped it in her lap. By the end of the parade she had an enviable pile.

When asked if she planned to attend next year’s parade, Elsie said,

As the horses and cars marched on, waving and flinging treats, citizens of Cleveland cheered, talked to their neighbors, or bought popcorn, cotton candy or jerk sandwiches from stalls along the street. On such a warm day, Christmas seemed a little far away, but in Cleveland it’s near in spirit.

By Wayne Hinshaw For the Salisbury Post LEWISVILLE — With the recent relaxing of restrictions on distillery sales in North Carolina,... read more