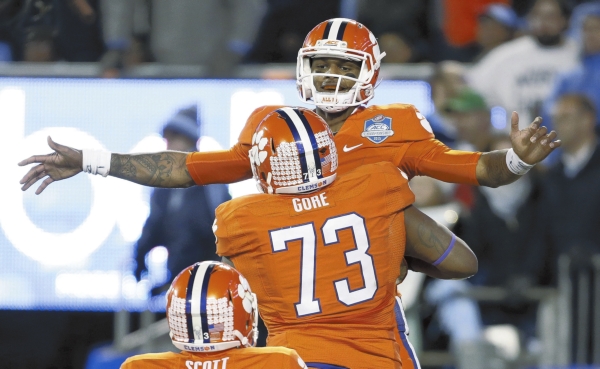 It didn’t come without some suspense.

North Carolina’s Ryan Switzer hauled in his second TD catch of the game with 1:13 left to cut Clemson’s lead to eight and threaten the Tigers.

Now, the only suspense left is whether Clemson or No. 2 Alabama is in the top spot when the playoff pairings are revealed Sunday.

“We’ve got three top 10 wins. Anybody else got that? And we’re 13-0,” a grinning Clemson coach Dabo Swinney said after the game.

Wayne Gallman ran for 185 yards on 27 carries and scored two touchdowns and Artavis Scott had seven catches for 96 yards and a score.

Marquise Williams threw for 224 yards and three touchdowns and also ran for 81 yards and a score for the Tar Heels (11-2, No. 10 CFP), who were trying to win their first ACC title in 35 years.

Clemson began to take control midway through the third quarter, turning a Williams interception in the red zone and failed fake punt into touchdowns to take 35-16 lead. Gallman scored on a 3-yard touchdown run and Watson connected with Scott on a 35-yard scoring strike in the end zone to build a 35-16 lead.

After Williams cut the lead to 35-23 on a 1-yard TD run, the Tigers got a scare when Watson took a shot to the side of his helmet with 29 seconds left in the third quarter on a short run. But he returned to the game after sitting out one play.

The Tar Heels trailed 42-30 midway through the fourth quarter and were looking to make it a one-possession game when Clemson defensive end Shaq Lawson sacked Williams and forced a fumble that teammate Austin Bryant recovered. That led to a field goal and 45-30 lead.

The Tigers outgained the Tar Heels 309-103 in the first half, but needed a jump pass touchdown from Watson to tight end Jordan Leggett with two seconds left in the second quarter to take a 21-16 lead into the locker room.

Clemson’s lead might have been bigger had it not been for a curious decision by Tigers punter Andy Teasdall, who decided to take matters into his own hand and take off running on fourth-and-15 at his own 30. He picked up just 4 yards before being dragged down and received an earful from coaches when he returned to the sideline.

The Tar Heels took advantage right away, quickly moving 34 yards in four plays with Williams finding Switzer in the back of the end zone for a 3-yard touchdown pass to give the Tar Heels a 16-14 lead.

“My punter, I don’t have an explanation,” Tigers coach Dabo Swinney said in a televised interview at halftime. “He just tried to do something on his own.”

However, Watson would put the Tigers back in front with two seconds left in the first half on a 1-yard jump pass to tight end Jordan Leggett.

Watson was named the game’s Most Outstanding Player while continuing to build his case to become the first Heisman Trophy winner in school history.

“If you sit down and watch our 13 games, he’s the best player in the country — and there is no doubt about it,” Swinney said. “This guy beats you not just with his legs, but his arm, his mind, his heart, his guts and his toughness. He’s a great champion.”

By Amy Farnum Patronis NCAA.com PENSACOLA, Fla. — “We Are UnFalconBelievable” was the catch phrase printed on the T-shirts worn... read more