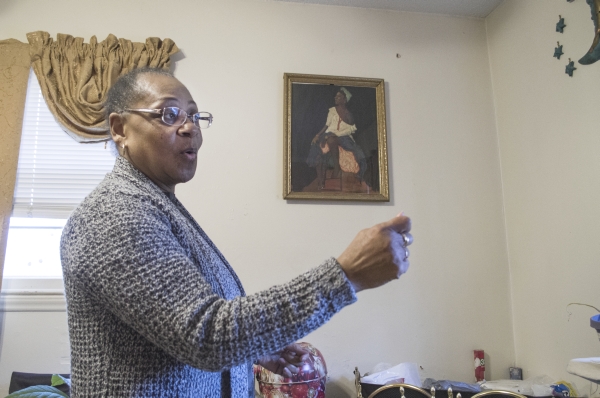 Josh Bergeron / Salisbury Post - China Grove resident Louise Williams looks out of her window Thursday as she describes how a bullet punctured her house walls last week. Williams was only a few feet away when the bullet entered her house.

CHINA GROVE — Every night, Louise Williams lowers the blinds in her bedroom. Last week, her routine was interrupted by a bullet that sped through the walls of her home.

Louise was standing just a few feet from where the bullet entered her Kirk Street home. It startled her, and she wasn’t initially sure what the noise was. Her husband McKinley Williams said it must be a bullet. A group of people had been shooting on an adjacent piece of property for a majority of the day, McKinley said.

The couple called China Grove police, who responded within five minutes, according to an incident report. More than a week after the incident, however, no criminal charges have been filed. Police classified the incident as criminal damage to property and Lt. Andrew Deal, second in charge at the China Grove Police Department, says the officers don’t know who shot the Williams’ house and say “there’s no way to know” who really did the shooting.

Deal said the adjacent property owner has committed to pay for any damages. The piece of property where the Williams family and police suspect bullets came from is owned by the Bostian Ethel Eudy Estate, according to Rowan County tax records. Frederick C Sechler is listed as a secondary owner.

The sun was beginning to set in China Grove on Nov. 28 and Louise walked over to her bedroom windows to close the blinds. She and McKinley were lying in bed, watching TV. Louise said she usually closes the blinds every night before dark.

“When I got halfway across the room, I heard a noise and something flew in front of me,” Louise said.

When asked by his wife, McKinley said it must’ve been a bullet. A group of people had been shooting on the adjacent land for most of the day, McKinley said.

He said people have used the land for shooting previously, but Nov. 28 was the first time a bullet penetrated the house.

There’s a noticeable hole inside of the house. McKinley said other shots hit the house, but no others penetrated the building.

McKinley and Louise called police about the incident, but say they’ve been treated like suspects in a crime rather than victims.

“I just feel like we’ve been treated differently than we should have,” McKinley said. “The only thing I’ll say is that I don’t think the police did a good job of handling this.”

Although a bullet pierced the walls of the Williams’ home, Deal said the shooters couldn’t be charged with firing a gun within the city limits — a crime according to China Grove’s town ordinances — when asked about the case initially. The gun involved in the shooting was fired from outside of the city limits, on the Bostian Ethel Eudy property, Deal said. It was just target practice, he said.

The Bostian property sits within an area of land not part of China Grove or Landis. Deal said there’s no crime for firing a gun on private property outside of the town limits.

When asked about the case later, Deal and China Grove Police Chief Eddie Kluttz said it was still under investigation. Deal said “there’s no way to know” who did the shooting.

Police only provided one of six pages when asked for a copy of the incident report.

Multiple criminal defense attorneys in Salisbury said there’s likely not any charges that could result from the incident. Police have said the shooting wasn’t intentional.

If the shooting was intentional, the case would be different, attorneys said.

McKinley said he’s satisfied with damages being paid, but he wishes more could be done.