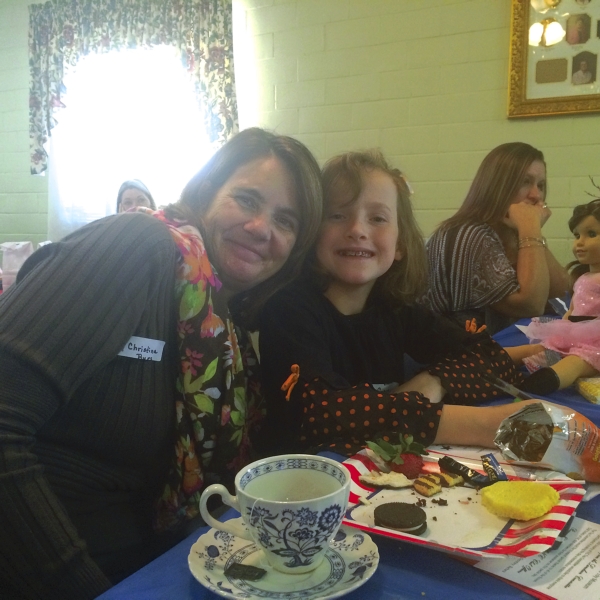 Grace Bues, age 9, traveled from Cary to enjoy the tea party with her mom, Christina.

Submitted by the Rowan Doll Society of NC

The event was held at the Woman’s Club of Spencer and more than 80 people attended this fun and educational event. Most of the young attendees brought their favorite dollies with them as their special guests.

The tea party, which was created for budding doll collectors, gave young people a glimpse into the fascinating world of collecting and learning. The guest speaker, Cheryl Phillips, traveled from Raleigh.

Phillips has been collecting dolls of all kinds since childhood, with fashion dolls as her favorites. Most importantly, Phillips has served as the leader of an American Girl doll club in the past and as president of the Duke and Duchess Doll Club of Durham.

Phillips spoke candidly about World War II and the affects it had on the lives of young girls and their close-knit families. She delivered her entertaining program in period dress complete with hat and gloves. In addition to her educational program, she taught the girls a short dance routine which included a “proper salute” and “jazz hands.”

The Rowan Doll Society organized this event as a special fundraiser for the Spencer Doll and Toy Museum and the United Federation of Doll Clubs. Both non-profit organizations share the same mission: the education and preservation of dolls.

During the tea, some of the girls were interested in joining the UFDC Junior collectors program and filled out their applications. The purpose of the program is to help build an interest in doll collecting and provide those under age 18 an opportunity to enjoy, grow, share, and be an active part of the world of doll collecting.

After the luncheon, attendees toured NC’s only Doll and Toy Museum, located just around the block at 108 Fourth Street in Spencer.

If you’d like more information on the Rowan Doll Society, the Spencer Doll and Toy Museum or United Federation of Doll Clubs, contact Helen Thomas at hleethomas@yahoo.com