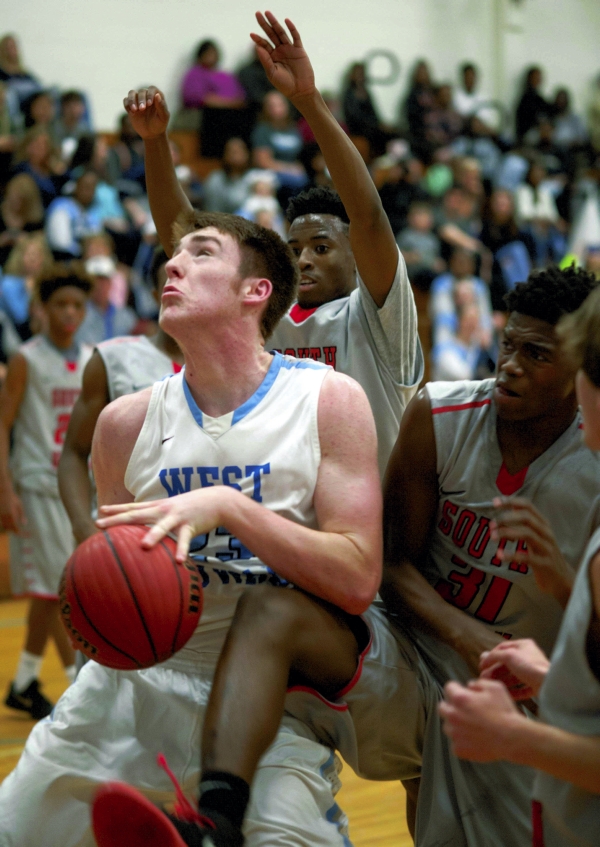 MOUNT ULLA — New South Rowan coach Andre McCain played for West Rowan coach Mike Gurley on strong Falcon teams that went 51-8 in the 1997-98 and 1998-99 seasons, and McCain was warmly embraced by his mentor prior to Friday’s SPC game.
Unfortunately, that hug was the highlight of McCain’s evening. His Raiders were down, 31-5, after 12 minutes and never got back in the game. West Rowan got 24 points from sophomore Caleb Mauldin and romped, 77-43.
“We came into a hostile environment and we got off to a slow start,” McCain said. “Things snowballed on us. The hole got bigger and bigger.”
South (0-4, 0-3 SPC) scored first when Marquis Rhyne hit a 3-pointer. But the the Falcons scored the next 12 points. After Rhyne made another bucket, West reeled off 19 unanswered points.
West hit three 3-pointers in its 24-point first quarter, including 3-pointers by Nick Warren, Delgado and freshman Payne Stolsworth.
“Our press was very effective early in the game,” Gurley said. “We had two guards (Paris Hillie and Jason Delgado) playing with very high energy and our other guys (Mauldin, Daniel Day and Austin Love) were playing solid on the boards.”
South outscored the Falcons the last four minutes of the first half but still trailed 40-15 at the break. By the half, Gurley was well on his way to his 367th victory at West (a county record) and the 469th of his head-coaching career.
“We lost to Northwest Cabarrus Tuesday, but then we had two very good practices before this game,” Delgado said. “You play like you practice, and those good practices carried over. We got off to a great start.”
Gurley said the Falcons “fatigued some” in the second half, but Stolsworth kept making 3-pointers, and Mauldin was scoring almost at will inside.
“I played with his father (Clint), but Caleb is a lot taller,” McCain said. “When it comes to back-to-the-basket players, he’s one of the best we’ll see.”
West (1-1, 1-1 SPC) stretched its lead to 31 points after three quarters, and reserves finished things off.
Tre Littlejohn led South with eight points.
The Raiders’ closest loss so far has been 64-44 to North Rowan on opening night.
“We got beat by a good team and they were just better than us tonight,” McCain said. “But we’ll keep working and we’ll get better.”
Gurley has a very young team. The Falcons also should get better.
“I like where we are right now,” Gurley said. “We’ll be the best we can be, and we’ve got a chance to be pretty good.”
West Rowan won for the eighth straight time against South. The Falcons were 3-0 against the Raiders last season, but all three victories were dogfights.