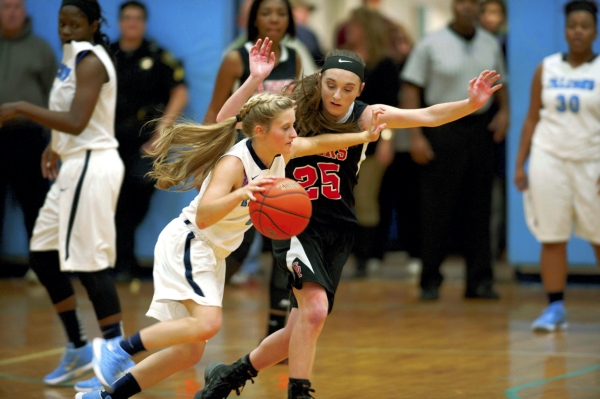 MOUNT ULLA — West Rowan entered Friday’s action as the county’s only undefeated girls team and maintained that status with a 79-48 pounding of an inexperienced South Rowan squad.
The Falcons have scored 71, 81 and 79 points in their first three games (77 ppg). The schedule has been super friendly, but the Falcons (3-0, 2-0 SPC) also have been pretty good.
“They’ve got a good combo of shooters and physical bigs,” South coach John Davis said. “That’s a really good basketball team.”
West still has all-county guards Khaila Hall and Taylor Martin and has a key new face is former North Rowan post player Egypt Alexander. While Hall and Martin were combining for 26, Alexander was pouring in 18 points against the Raiders (1-3, 1-2 SPC).
“Eygpt has good footwork and she’s just killing people with that left hand,” Hall said. “She’s not just doing her thing, she’s bringing up the spirit of the whole team.”
South freshman Janiya Downs is a prolific scorer. West held her to 23 points, but she has 102 in her first four varsity games.
“She’s going to get her points, but we switched defenses a lot and we stopped her some,” Hall said.
Hall drilled two 3-pointers as the Falcons literally sprinted to a 25-14 lead after a quarter.
Downs had 11 in the first half, but West was ahead 41-23 at the break.
“It was a frantic pace, but we like a frantic pace,” Davis said. “Our problem was turnovers, and we had at least 19 in the first half. Most of them were turnovers for no reason. We’d get a rebound, and then we’d just throw the ball to West. We were down 15, threw away a rebound, and they got a three-point play. That’s where they started pulling away from us.”
Ten different players scored for the Falcons, including Martin, a senior who was celebrating her 18th birthday.
A bright spot for South was an eight-point outing by sophomore Riley Corriher. Malaysia Williams and Jalee Rollins made two hoops apiece, and Kamryn Stamey had a nice move for an and-one.