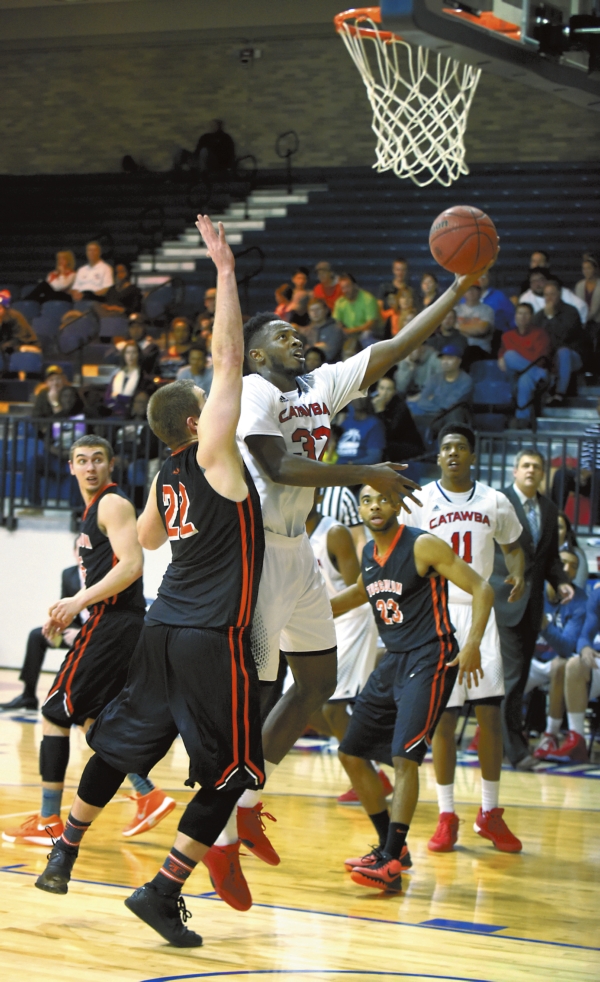 SALISBURY — When Catawba edged Chowan on Wednesday despite getting pounded on the boards, 6-foot-7 senior Julian Sampah’s quiet stat line as the starting center read: 17 minutes, four points, two rebounds.
So that was a point of emphasis for two tough practices. Catawba coaches challenged Sampah to rebound harder and smarter. He responded. His 14 boards fueled Saturday’s exciting comeback win at Goodman Gym against SAC rival Tusculum.
Catawba defended its home court, 82-78, after trailing by as many as 15 points.
“Even when we got down big, I could tell from the look on our faces that we weren’t going away,” Catawba coach Rob Perron said. “Jameel Taylor had that stoic look. Sampah had that same look, and he gave us a double-double. Everything Sampah got two hands on, he retained.”
Taylor scored 20, including 8-for-9 at the foul line. Sampah had 12 points to go along with his career-best 14 rebounds.
“Coaches have been stressing rebounding,” Sampah said. “I wanted to do my part.”
Jerrin Morrison carried the Indians (3-3, 2-1 SAC) in a critical stretch and scored 13. Rakeen Brown hit three 3-pointers and scored 11. Troy Warren, Andrew Ingram and Reggie Perkins were responsible for 24 points off the bench.
“Everyone had the same mindset today — find a way to win,” Taylor said. “Even when all their guys were making every shot, we kept fighting.”
It looked grim for the Indians for a while. Tusculum drilled seven 3-pointers in the first 11 minutes to take a 32-17 lead. Former Reagan High star Zach Hartle buried three 3s in a two-minute span.
Catawba rallied behind Taylor and Sampah, but when Javon Price (16 points) made his third 3-pointer of the half — Tusculum’s ninth — the Pioneers led 43-33 with eight seconds left.
Brown made a 3-pointer at the horn for the Indians, and they jogged to the locker room feeling fortunate to trail, 43-36.
“Tusculum shot the ball exceptionally well, and we didn’t contest shots as well as we should have,” Perron said. “We were poking them in the belly button instead of challenging shots with hands high.”
Still, the Indians liked their chances. Tusculum had shot the lights out, but the deficit was single digits.
“We told the guys they’d hit us with their best shot,” Perron said. “They’d thrown a really nice uppercut, but they hadn’t knocked us out.”
Things changed in the second half. Tusculum shot 0-for-12 from the 3-point line. That was a combination of better Catawba defense and the law of averages.
“No one can keep hitting tough shots all night,” Sampah said. “Eventually, it stops.”
The other thing that changed was in the effort department. Catawba played harder. Catawba got second-chance points on the offensive end, and Sampah, Warren and Morrison cleaned the glass whenever Tusculum missed.
“Catawba changed how they played us in the second half and we missed contested shots and we missed open shots,” Tusculum coach Mike Jones said. “But the biggest thing was Catawba really went after it hard on their offensive board. They had eight offensive rebounds in the second half, and that’s what hurt us the most. Catawba is very good. You can’t keep giving them second chances to score.”
After taking a 2-0 lead on a stick-back by Vismantas Marijosius, Catawba didn’t lead again until Morrison, who had been in a slump, banked in a jumper for a 61-60 lead with 10:46 remaining.
“Jerrin puts more pressure on himself than anybody,” Taylor said. “Today, the only thing he had on his mind was winning the game, and he made some big plays for us.”
Catawba trailed, 75-70, with 4:28 remaining when Brown found Taylor for a critical 3-pointer.
Then Warren made the defining play of the eventful afternoon, defending a shot by Tusculum’s 6-foot-10 Chase Mounce, and then sprinting down the floor as Sampah grabbed the rebound. Brown got the ball to Warren ahead of the pack, and Warren made a layup as Mounce fouled him. Warren’s free throw put Catawba up, 76-75.
It was 76-all when Morrison drove to the right side of the hoop with 2:46 left, attracted a crowd and whipped the ball back out to Brown. Brown’s clutch 3-pointer put the Indians ahead to stay.
“I saw the double-team coming,” Morrison said. “I knew where the open man was, and I knew (Brown’s) shot was cash.”
With 14.3 seconds left, Taylor stood stoically at the line with Catawba still clinging to a 79-76 lead. He missed his first free throw, but he made the second.
Mounce made a layup to cut Catawba’s lead to 80-78, but with 4.2 seconds left, Ingram stepped to the foul line and calmly made two free throws to clinch victory.
Catawba shot 45.3 percent, while Tusculum (4-2, 1-1) finished at 42.6 percent.
“Tusculum really took it to us early,” Perron said. “But we stuck with it.”
Catawba plays next Saturday at Mars Hill.