Carson girls pull away from Robinson 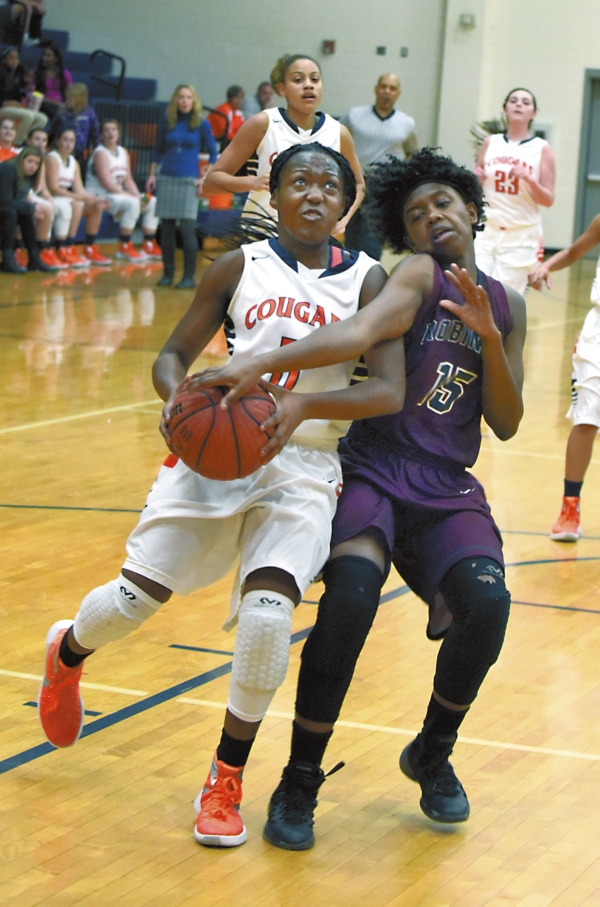 The Cougars may brush off their early success as “a good start,” — according to coach Brooke Misenheimer — but numbers don’t lie,  and that’s Carson heading the South Piedmont Conference in your Saturday morning paper.

“I’m so proud of this team,” Misenheimer said Friday night after Carson (4-1, 3-0) rallied from seven points down in the third quarter to beat visiting J.M. Robinson, 52-41. “We weathered the storm and got our best win by far. We showed resilience and kept playing hard.”

Especially in the fourth quarter, when the Cougars outscored Robinson (0-2, 0-2) by 17-4 and won going away.

“They’re just extremely well-coached,” losing coach Justin Thomas said. “We took the lead and they didn’t get away from what they do. They didn’t adjust anything.”

They didn’t have to. Carson placed three scorers in double figures and converted 12 of 14 free throws in the final period, when Misenheimer managed the game-clock like a seasoned pro.

“It was a big game in the conference and we needed people to step up,” sophomore Olivia Gabriel said. “We ran the floor very well tonight. We did a lot of things well.”

That includes Gabriel. The 5-foot-3 point guard played with insouciance and swagger, quarterbacking Carson’s offense like she was directing a two-minute drill. “As a point guard, that’s what she has to do,” Misenheimer said.

Gabriel’s performance made you want to burst into song. She made three baskets in the first quarter, including a fast-break layup the put the Cougars ahead 15-8 with 52 seconds on the clock. Then after Robinson, behind the authoritative rebounding and glasswork of 5-10 junior Jessie Koerner, surged ahead, 34-27, in the third period, she helped fuel Carson’s comeback with a single free throw.

Carson used an 8-1 spurt to tie the score, 35-35, on Anne Marie Turney’s layup late in the quarter. In the fourth, back-to-back baskets by McKenzie Gadson pushed the Cougars ahead for good, before Gabriel launched a one-girl parade to the free throw line. She made 11 of 12 attempts in the last six minutes to help the Cougars salt the game away.

“We didn’t want to foul her,” Thomas said. “You pressure her for a while but then she slips right around it. What a tremendous game she had.”

Gabriel finished with 18 points, just a few nights after dropping 21 on East Rowan. “I’ve always been told the ball stays in the point guard’s hands as much as possible,” she said. “If I get fouled, I’ll go to the line. It’s not easy but it’s something you can practice.”

Afterward Misenheimer was reminded that her team is sitting in the SPC bird seat. “We’re not gonna focus on that,” she insisted. “We’re focusing on getting better every game — maturing as a team, taking discipline — and I think we’re moving in the right direction.”