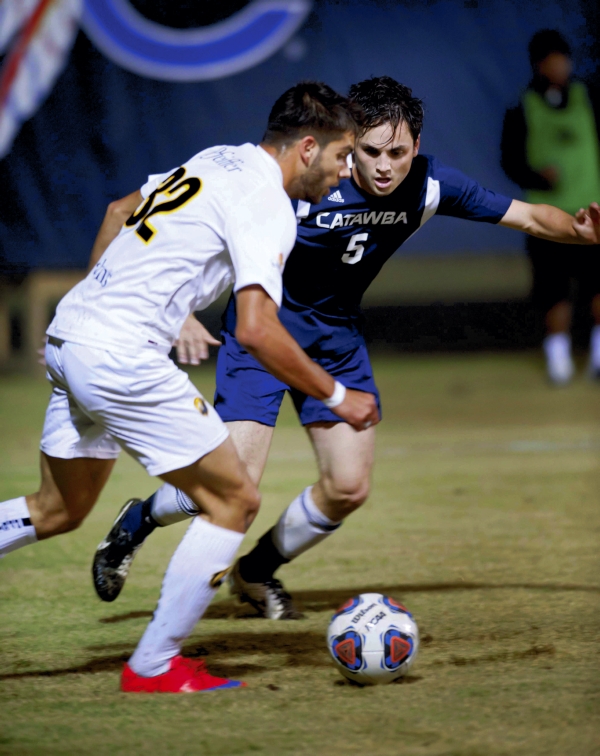 PENSACOLA, Fla. — The magical season for the Pfeiffer men’s soccer continues for one more game.

The Falcons, ranked No. 1 and 24-0, advanced to the title game with a thrilling, 2-1 overtime victory over Charleston (W.Va.) here Thursday night in the national semifinals at Ashton Brosnaham Complex.

Five minutes into the second overtime period (sudden death), Pfeiffer’s Jaime Siaj followed a miss by leading scorer Nathan Regis with the game-winner. The sequence developed off of a crossing pass from Santi Moar, his second assist of the game.

Just like that, Coach Bob Reasso’s Falcons were on to Saturday championship. Pfeiffer will play the winner of Thursday night’s second semifinal between Rockhurst (Mo.) and Cal-Poly Pomona.

“We fought to the end,” said Siaj. “I was in the right spot at the right time. Any other teammate could have been there to be the one to win it for us.”

Charleston, 20-3, had tied last night’s match with just 1:38 left on a goal by Will Roberts, his 21st of the season. Lewis Osborne assisted on the play.

The Eagles dominated the first overtime period, getting four shots on goal to none for Pfeiffer. One of the shots was blocked, one hit the post and two were save by Falcon goalkeeper Thomas Correa.

Pfeiffer controlled the beginning of the second overtime and Dani Siaj had a shot off a corner kick about 30 seconds before Jaime Siaj scored the deciding goal.

Charleston ended up with 20 shots, 10 on goal. Pfeiffer had 10 shots and just four on goal, but two of those found the back of the net.

Correa had nine saves for Pfeiffer. Fabian Veit, the Eagles’ goalkeeper, was credited with two saves.

Pfeiffer had take a 1-0 lead in the first half, when all-star Regis scored his 30th goal of the season in the 31st minute. Regis scored off of a deflected shot and put the ball away near the left post.