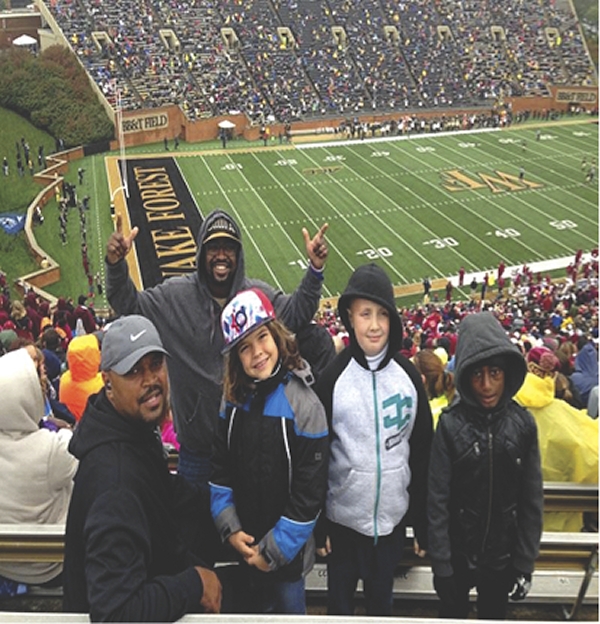 Coach Chavis Maxwell, Caden Farmer, Kory Barker, Landon Murrell and Oliver Williams were just some students and parents who attended a trip to Wake Forest University for the football game against Duke University. Mt. Sinai Baptist Church of Catawba Pastor Donald Gray takes community members and children on trips like this to broaden their horizons and help them dream bigger. Submitted photo

With trips to football games and the Charlotte Motor Speedway, Donald Gray is helping kids in the Kannapolis City School district see a brighter future.

Gray, pastor of Mount Sinai Baptist Church of Catawba, took around 265 children and parents to the football game between Wake Forest University and Duke University on Saturday.

Gray started a program called Think Before you Move to help community children see beyond their current circumstances to something greater.

Just like in chess, which Gray teaches the kids how to play, Gray teaches kids that every move they make has a consequence.

Kids also have to learn to protect themselves like the queen protects the king in the game.

“We have to teach them to put people around them to protect them,” he said.

Gray said it was the surrogate fathers around him who protected him from the influences of the environment he grew up in. For Gray, his uncle and basketball coach kept him of trouble and on the right path while his father was out of his life.

“Some people get shot, stabbed, killed in areas I was born and raised up in, but they were able to keep me and protect me and get me out of that environment,” he said.

Gray said a trip to a baseball game in Atlanta with his basketball coach changed his outlook on life.

“It made me dream big because we came from a poor area, but it gave me that chance and opportunity to start saying I can do this and I can do that because I was able to see some things,” he said.

Now, Gray works to give that same outlook to kids in the Kannapolis area. In the late 1990s, he worked with then-governor Jim Hunt to put computers in every classroom. Two years ago, he started the Vision of Life program to help students with their end-of-grade tests.

Last summer, more than 1,000 hungry children were fed every day because of the church’s summer program.

Gray also takes the kids to places like Discovery Place and Dan Nicholas Park, and even took kids to Canada for their big trip this year.

“We try to broaden their horizons, not only just with academics, but we also try to socialize them,” Gray said.

Because people in his life helped him succeed, Gray is now dedicated to doing the same for local kids.

“All kids need to have an opportunity for somebody to get out there and reach them,” he said. ”Reach one, teach one.”