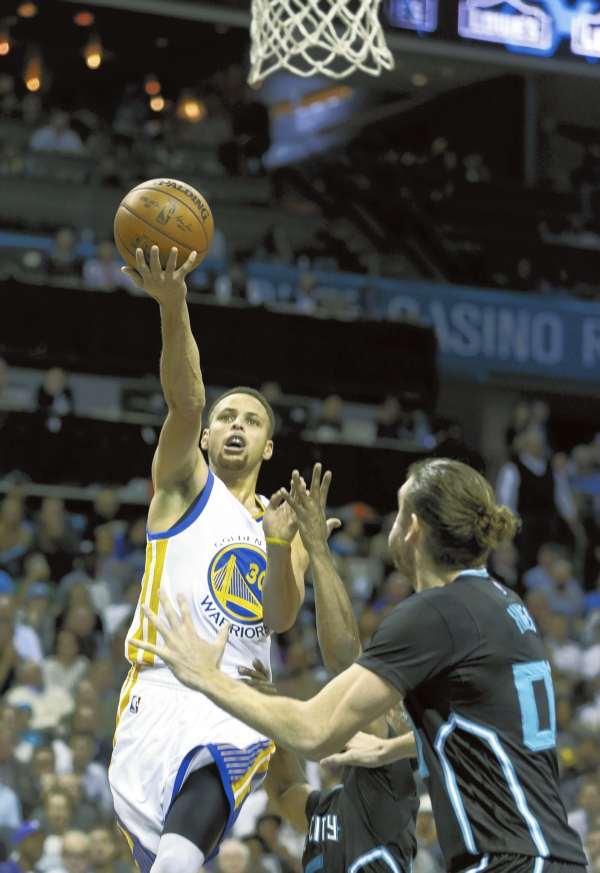 CHARLOTTE (AP) — Stephen Curry scored 40 points in three quarters and the Golden State Warriors defeated the Charlotte Hornets 116-99 on Wednesday night to extend the best start in NBA history to 20-0.

On a night when the Hornets honored Curry’s father, Dell, the franchise’s career scoring leader, it was his oldest son who stole the spotlight by hitting 14 of 18 shots from the field and going 8 for 11 from 3-point range.

Stephen Curry, who grew up in Charlotte and starred at nearby Davidson College, scored 28 points in the pivotal third quarter. He hit 10 of 11 shots from the field, including all five 3s — many from well beyond the arc and in the face of a defender — to help the Warriors build a 21-point cushion.

The reigning MVP sat out the entire fourth quarter due to the big lead.

Klay Thompson had 15 of his 21 points in the first quarter as the Warriors bolted to an early 15-point lead.

Despite missing the inside presence of center Al Jefferson — out at least two weeks with a strained left calf — and 0-for-8 shooting from Kemba Walker in the first half, the Hornets fought back to cut the lead to 60-51 at the break.

But midway through the third quarter Curry got rolling, launching deep 3-pointers, several times turning and jogging back down court well before the ball even went through the net.

It marked the fourth time this season Curry has scored 40 points by the end of the third quarter. The rest of the NBA combined has reached that mark just once. Curry hit jumpers from 24, 25, 30, 29 and 30 feet in the third period.

Hornets: Charlotte officially signed coach Steve Clifford to a multiyear contract extension. The team announced last week he had agreed to terms. … Associate head coach Patrick Ewing missed the game after having a minor procedure on his knee. … The Hornets wore their alternate black, short-sleeve jerseys for the first time.

Warriors: At Toronto on Saturday.

Hornets: At Chicago on Saturday night.