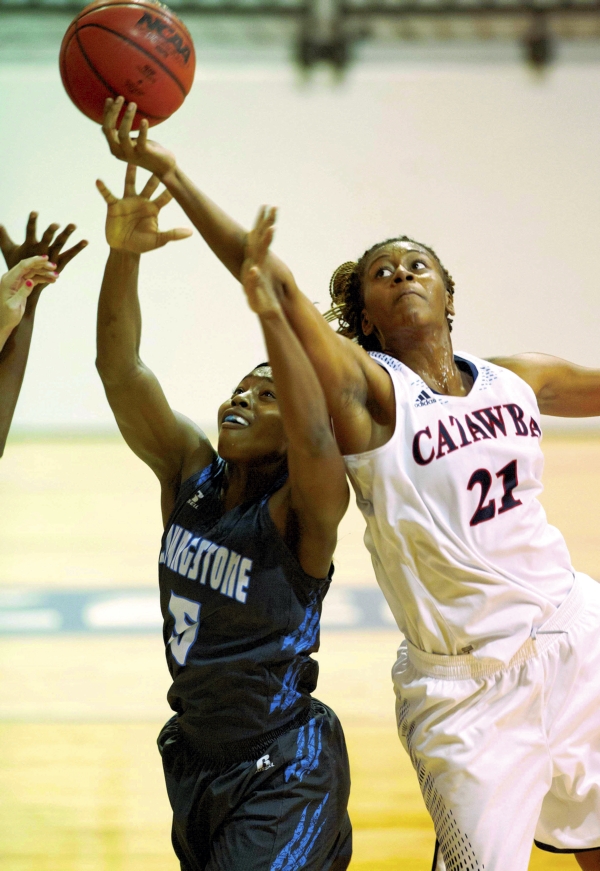 The inside power of forward Terri Rogers and the outside accuracy of guard Emma Ucinski proved decisive in the second half as Catawba (3-4) broke out of a tight battle to hand the Blue Bears (2-1) their first loss of the new season. The game took an unusual turn down the stretch as Livingstone finished the game with just three players on the floor due to injuries and foul problems.

Livingstone only dressed seven players for the game, then lost starter Taylor Daniels to an ankle injury in the second quarter. Brittany Taylor fouled out at 5:32 of the fourth period, then the Blue Bears lost Toxiana Wilson on fouls with 2:25, leaving just four players. In the final minute, they also lost guard Amber Curtis to fouls to close out the contest with just three players on the court.

“We were low on numbers then had an injury that really put us in a bind, ” Livingstone coach Anita Howard said afterwards. “But I just told the girls to keep fighting through to the end.”

The unusual mismatch down the stretch caused some moments of hesitation for the Indians but in the end they just kept playing their regular fast-paced style. “What do you do in that situation?,” Catawba coach Angie Morton said. “I have never coached in a game that didn’t have five players out there so I really didn’t know what to do. We just kept playing our game.”

By the time Livingstone ran out of players, the game was already fairly well in hand, thanks to a major surge right after halftime. A tenuous, 38-31 Catawba lead was suddenly 52-37, thanks to a string of long range 3s by Ucinski, Marshuana Butler and Janna Dixon. Catawba outscored the visitors, 21-8, in the period for a 59-39 lead.

“We knew the third quarter was when we usually are back on our heels a little,” said Ucinski, a 5-6 senior guard from Atlanta. ” But today, we really came out strong against a rival team. It also feels really good to end the losing streak. We need to get that monkey off our back.”

Down the stretch, Catawba turned to their talented forward Rogers to control the inside and  keep Livingstone from getting any closer than 16 points. A 5-11 sophomore from Burlington, Rogers led the win with 23 points and 12 rebounds. Ucinski scored 15 points, including a pair of key three-pointers, while point guard Serena Brown came through with 12 points and what Morton called a “very aggressive effort.”

The first half was a different story as Catawba pulled out to a 17-7 lead late in the first quarter only to have the Blue Bears mount an 11-0 run to claim the lead, 18-17. Wilson, Daniels and Searcy had the key baskets in the comeback. But Catawba had a scoring run on their own in response as Morgan Franklin, Ucinski, and Dixon all hit treys to reclaim the led for good.

“The third quarter especially was when we made our push,” Morton said . “We just continued to push the ball in transition and run the floor and stick to our game plan.”

The Indians hit 17 of 22 free throws and hit 44 per cent of their shots in the second half. Livingstone was held to just 29 per cent shooting from the field and were out-rebounded 52-45. The Blue Bears did get a stellar effort from Kyala Searcy, a 5-10 sophomore from Winston-Salem who notched 24 points and pulled down 10 rebounds for the game.

With the win, Catawba now leads the all-time series against Livingstone, 22-5. They return home Saturday afternoon and to South Atlantic Conference play against Tusculum at 2 p.m. Livingstone will head to Clayton, Ga. this Friday and Saturday to play against Armstrong State and Clayton State.

By Mike London mike.london@salisburypost.com GRANITE QUARRY — Ugliness, like beauty, is in the eye of the beholder. East Rowan boys... read more