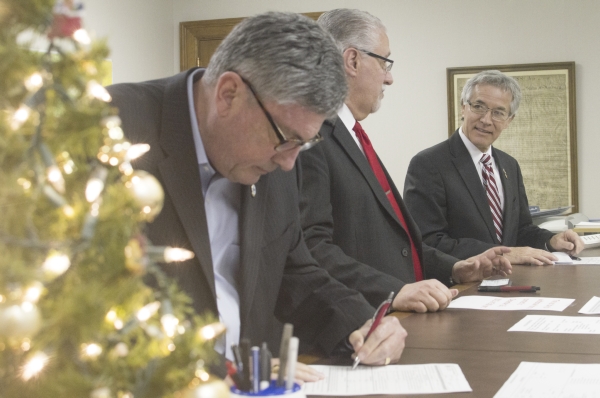 County Commissioner Craig Pierce, Reps. Carl Ford and Harry Warren were the first to file Tuesday for the 2016 primary elections. All three filed for re-election and will compete in the Republican Party primary. Josh Bergeron / Salisbury Post

A swath of Republican incumbents were the first to file Tuesday for local positions in the March 2016 primary.

By early afternoon, incumbents in most local positions had filed for re-election. No Democrats filed for positions representing Rowan County on Tuesday — the first of a 21-day filing period — according to state and federal elections records. Positions included in the March 2016 primary range from Kannapolis school board to governor.

Despite the rush of incumbents, several races include the potential to be competitive because of declared opposition.

State Rep. Carl Ford, a Republican, was the first to file locally at the Rowan County Board of Elections. Ford, 58, is running for his third term as the representative for the 76th State House District, which covers parts of Rowan and Cabarrus counties. He owns a radio station in China Grove.

Ford doesn’t yet have declared or official opposition in the Republican primary. Catawba College student Holden Sides in July said he plans to run against Ford in the November 2016 general election.

Warren, a Republican, is running for his fourth term as the representative for the 77 State House District, which covers part of Rowan. He is a former human resources specialist. He has declared primary opposition from Republican Andrew Poston, who is studying for a master’s degree in teaching at the University of North Carolina at Charlotte.

Ford and Warren both said they are running to continue Republican reforms in the N.C. General Assembly. Ford specifically mentioned tax reform, property rights and gun rights. Warren said the General Assembly has “laid the foundation” and needs to build on previously passed measures.

Pierce, 60, is running for his second term on the Rowan County Board of Commissioners. He is the owner of Pierce Interiors, a local construction company. Pierce and Caskey, both Republicans, are the only ones who have publicly declared their candidacy for the Rowan County Board of Commissioners. Pierce said he wants to ensure current projects are completed. He highlighted a county-owned water and sewer system as one project he’s specifically interested in completing.

Kannapolis Board of Education Chairman Todd Adams on Tuesday also filed at the Rowan County Board of Elections for re-election.

State senators Andrew Brock and Tom McInnis, as expected, filed for re-election on Tuesday. Both filed in their home counties.

Brock, a Republican, filed in Davie County for re-election to the 34th State Senate District seat, which covers Davie County and parts of Iredell and Rowan counties. He is running for an eighth term.

McInnis, also a Republican, filed for re-election to the 25th State Senate District seat, which covers a wide, rural area from Scotland County to southern Rowan. He is running for a second term. McInnis filed in Richmond County.

Both of Rowan’s Republican U.S. representatives added their names to the list of elected officials seeking re-election.

He doesn’t yet have any officially declared competition in the Republican primary or November 2016 general election who meet minimum requirements. The Federal Elections Commission, however, lists Rockingham resident Bailey Wayne Tuttle as a challenger. A group named The Voice of Teens of America is listed as Tuttle’s official campaign committee. The group’s website lists Tuttle as its 16-year-old director. The U.S. Constitution requires House members to be 25.

Hudson said he’s running for re-election to continue to be a conservative, common-sense voice for people of the 8th Congressional District.

U.S. Rep. Virginia Foxx, 72, announced Tuesday she has submitted filing paperwork for re-election to North Carolina’s 5th Congressional District, which covers a large portion of northwest North Carolina and a portion of Rowan County. Foxx has served in her current position since 2005. Before being elected to the U.S. House, Foxx was a state senator and worked in higher education.

In a news release, Foxx said she is running for re-election because conservative ideas work and she’s not afraid to make that case to voters.

Foxx has officially declared competition in the March primary from Kernersville resident Pattie Curran, who has worked as a social worker and president of a nonprofit. N.C. State Board of Elections records don’t yet show Curran as having filed. The Federal Elections Commission shows Curran as having filed a statement of candidacy prior to Tuesday. The statement allows Curran to raise money for her campaign.

Filing for the Mach 2016 primary elections continues until December 21.