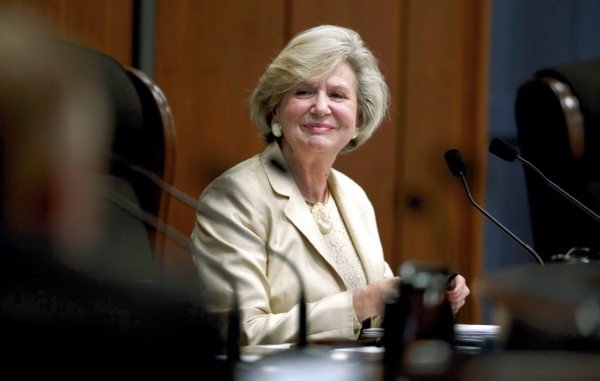 As Paul Woodson and Pete Kennedy say goodbye, Karen Alexander takes the helm as the new mayor of Salisbury.

The Salisbury City Council elected Alexander as the mayor of Salisbury at their meeting at City Hall on Tuesday.

New members Kenny Hardin and David Post, along with returning council members Maggie Blackwell and Brian Miller, were sworn in as the city’s new council.

Alexander was nominated by Post for mayor after being sworn in as a council member, and the council unanimously approved the nomination.

In Salisbury, the entire five-member council is elected every two years. From among those elected, the council members select the mayor. That has historically been the person who won the most votes in that year’s municipal election, and the council held to that tradition this year in selecting Alexander.

Alexander said she was ready to work with the new council to make Salisbury a better place.

“I look forward to working together as a team with each of you to meet the challenges and opportunities of new hope for a greater community for all,” she said.

Alexander also announced the major goals she wanted to implement in the first 90 days of her term, as well as the council attending two leadership training programs.

Some of those goals included evaluating where the city is financially, beginning work on the North Carolina Department of Transportation 2040 plan, which is a guide for the state’s future transportation investments, and creating a new human resource document called the Salisbury Way to establish a code of ethics and professional conduct manual for new hires.

During the reception for the new council before the meeting, Daniel Almazan, Alexander’s son, said it is great for Salisbury to benefit from Alexander’s leadership capabilities.

“Seeing how many of the organizations that she’s been involved with that have really flourished while she was at the helm, it’s going to be nice to see,” he said.

Before the new council could take their seats, the former council had to step down. Woodson and Kennedy left their seats to standing ovations.

Woodson — a Salisbury City Council member for 18 years and mayor that past four years — thanked his wife, daughter and staff.

“I want to thank all the voters. We don’t elect ourselves,” Woodson said. “We appreciate all you folks out there who are voters.”

Kennedy said serving was a joy and the 22 years he served on the council flew by.

“I hope I have left some type of legacy that (Salisbury) would be proud of,” he said.

Both Woodson and Kennedy were given resolutions of recognition and keys to the city.

“I’m thrilled for this next chapter in our lives but, you know, Paul has loved, loved being mayor of this city so it’ll be a big change for him,” she said, “but he’s certainly leaving it in good hands and is excited for the next chapter.”