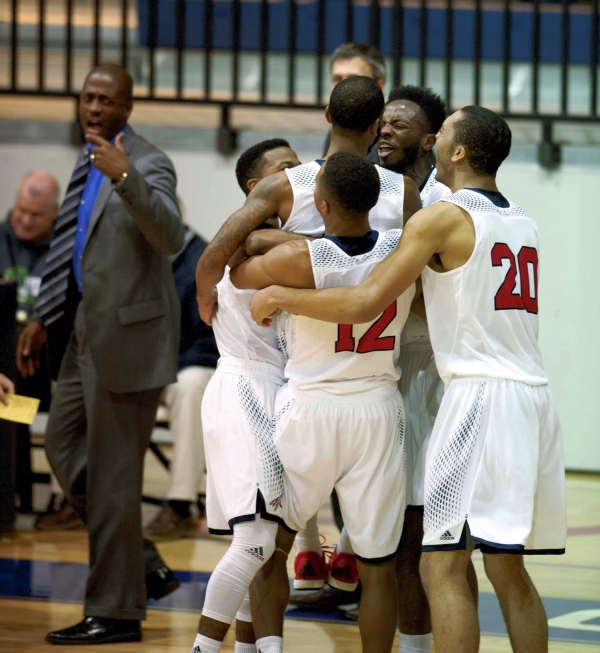 SALISBURY — Promising freshman Malik Constantine was on crutches with a broken foot.
Senior banger Vismantas Marijosius exited early with back spasms.
High-flying Jerrin Morrison, who usually wows the home crowd at Goodman Gym, made only one field goal.
Visiting Chowan pulled down 21 offensive rebounds and had 11 fewer fouls than Catawba.
There were a lot of perfectly good reasons for Catawba’s men’s basketball team to lose on Wednesday night. Somehow the Indians didn’t.
Rakeen “Rock” Brown made a terrific, clutch shot in the lane with three seconds left, and Catawba won, 64-63, against Chowan.
“That’s three one-possession games we’ve played with Chowan in two years,” Catawba coach Rob Perron said. “When we play them, it’s a good one.”
Catawba (2-3) shot 53.1 percent, but it was still a serious struggle because of Chowan’s 23 second-chance points and 18 Catawba turnovers.
“With the injuries we have, plus some foul trouble, we were calling more audibles than I can ever remember and we were playing a lot of small lineups,” Perron said. “Chowan took full advantage on the boards whenever we had to go small.”
Catawba led almost the whole game and went in front by as many as 12 points.
But the Indians suffered an offensive drought late, and a tip-in by Josh Mellette and a layup by Carlos Arroyo pulled the Hawks within 60-59 with 2:25 remaining.
“Chowan just never went away,” Perron said.
Brown, who had seven assists, got the ball to an open Julian Sampah, who buried a 16-footer with 1:36 remaining for a 62-59 lead and the first Catawba points in almost four minutes.
But Marco Haskins tipped one in for Chowan to cut Catawba’s lead to a single point with a minute left.
After an empty Catawba possession, Chowan’s standout guard Kortez Smith made a crossover dribble to free himself for a jumper and drew a foul from Brown. Smith calmly made two free throws, and the Hawks, who had been climbing uphill for 38 minutes, led 63-62 with 13 seconds left.
Chowan had only three team fouls at that point and used personal No. 4 to disrupt the Indians’ attack with 11.6 seconds left.
After a timeout, Catawba put the ball in the hands of Brown, a point guard coming back from the ACL injury that wrecked his first season with the Indians. Chowan still had fouls to give before Catawba could shoot free throws. Brown expected to be grabbed, but he never was.
“If they fouled me, I was going to try to throw a shot up,” Brown said. “I tried to stay clam and stay poised. I pushed it into the lane, and then the second line of defense was all around me. But I just kind of hooked it up, and it went in. I’d committed the foul that let them take the lead, so I had to make a shot. I just had to.”
He made it. His shot swished, and all’s well that ends well.
“It looked they had him surrounded,” Perron said. “But Rock just kind of slid between them.”
Catawba shot 57.1 percent in the first half, including 3-pointers by reserve guards Jordan Barber and Reggie Perkins, and took a 37-32 lead to the break.
A spree by 6-foot-9 center Troy Warren early in the second half — including a dunk — helped Catawba go up by nine points The Indians’ lead stretched to 12 — 53-41 — when Barber nailed back-to-back, straight-on 3-pointers.
But there were still 13 minutes to play. Chowan’s relentless board-work allowed the Hawks to hang around and eventually make a run.
Smith scored 22 for Chowan, while Arroyo had 14.
Catawba got it done because a committee of 10 guys scored. Brown led with 12 points. Barber had 11. Warren and Jameel Taylor had 10 each. Andrew Ingram added a very efficient eight points on 3-for-4 shooting.
“Tough game against a team that came in 5-1, but we protected our court,” Brown said. “We don’t want to ever lose on our new floor.”
The Indians are 2-0 in refurbished Goodman Gym. While they are only 2-3, all five teams they’ve played so far have winning records.
Catawba returns to South Atlantic Conference play on Saturday afternoon against Tusculum.