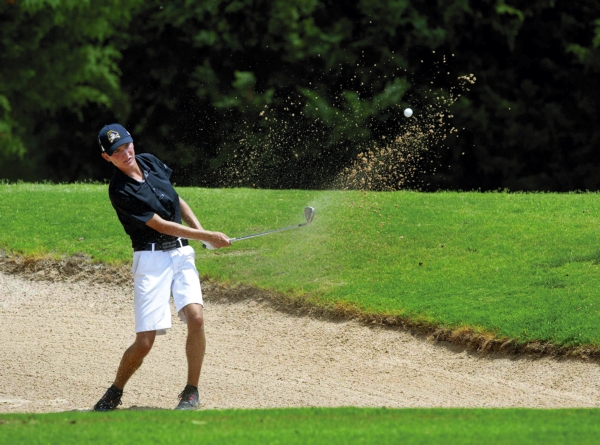 GRANITE QUARRY — East Rowan’s Logan Shuping possesses great golf genes — Sprinkles and Shupings — and he was introduced to the game early.
“I’m not exactly sure when I started, but I had to be about 5 years old,” Shuping said. “I know that when I was 6 or 7, I was playing 18 holes with my parents.”
East Rowan golf coach Rhett Teems saw Shuping in his early days, smacking arrow-straight drives at McCanless. He knew the kid had a chance be special.
Teems’ early evaluation proved accurate. Shuping signed recently with East Carolina’s golf program.
“He got talent, he’s put in a lot of work, and he’s played a lot of competitive golf,” Teems said. “He’s done all the things he needed to do to be successful.”
Shuping’s freshman year at East was when most of the world found out about him. He was the North Piedmont Conference Player of the Year in the spring of 2013 when East Rowan, South Rowan, West Rowan and Carson were competing in a 3A league with Iredell schools.
“I expected to do well, but winning the conference as a freshman was unexpected,” Shuping said. “(West Rowan’s) Jake Kennedy and (South Rowan’s) Davis Richards were in the conference, and those two would just bomb their drives. I wasn’t big and I didn’t hit it that far. To win the conference against players as good as Jake (now at Gardner-Webb) and Davis (now at N.C. State) gave me confidence that I could accomplish some things in golf.”
Shuping also was Rowan County champion as a freshman, shooting 73 at Corbin Hills. He made a birdie on the final hole to force a playoff with Kennedy. Then he won that playoff with a calm, routine par.
Shuping doesn’t play golf 365 days a year. He’s a pretty good basketball player and is one of the county’s better 3-point shooters. In the big picture, basketball has been an important outlet for him.
“Golf is such a mental game that you need a break sometimes,” Shuping said. “I really like playing basketball. It’s always given me some time away from golf every winter.”
Ironically, Shuping played one of his best golf tournaments in the midst of a basketball season. That was the Carolinas-Georgia Junior Championship, an event that he played in last January. He shot 76-70 — 146 at 7,000-yard Mount Vintage Plantation Golf Club in North Augusta, S.C., and tied for fourth. He was the highest finisher from North Carolina.
“That was one of the toughest courses I’ve played, so I believe that might have been the best golf I’ve ever played in my life,” Shuping said. “It was great competition, and I hadn’t been playing much, so playing the way I did was very encouraging. I took a lot of good things away from that tournament.”
Next to his strong showing in the Carolinas-Georgia tournament, he’s proudest of winning the 2014 Rowan Junior Open that was contested over a two-day period in August at The Club at Irish Creek and Warrior. It was a strong field, but Shuping nailed a string of birdie putts and breezed to victory.
Shuping said East Carolina started following him closely the summer between his sophomore and junior years. He committed verbally to the Pirates early in his junior year.
“I also considered Charlotte, Virginia Tech and Liberty, but it was a pretty easy decision,” Shuping said.
Shuping said he and Salisbury golfer Grace Yatawara, who signed with ECU on the same day as Shuping, have known each other a long time and have become friends since last fall when both committed to the Pirates.
“When you think about it, it’s pretty amazing that Rowan County has two golfers that signed with East Carolina,” Shuping said.
Shuping, who has been all-county and all-conference every year in high school, will be joining a strong college program. In addition to Shuping, coach Press McPhaul announced three more in-state recruits — Chris Akers, Patrick Stephenson and Blake Taylor.
Shuping knows Taylor well from Junior tournaments. He got to know Akers when they took their official visits the same weekend.
“This is a very good class,” McPhaul said in a press release. “It is comprised of exactly what we look for in a Pirate golfer. As a group, they are talented, determined, and competitive with strong work ethics. They are good students in the classroom, and we believe they are young men of high character.”
McPhaul added that it’s a plus that Shuping is a basketball player.
“He has an added dimension of competitiveness that is going to help him develop into a college player that will excel in tough competition,” McPhaul said.
Shuping has one high school golf season left, and the Mustangs should be a contender for the 2016 3A state title. Led by individual state champ Nick Lyerly and Shuping, the Mustangs finished second to Gastonia Forestview last spring. Shuping shot 71-77 – 148 in the state championships at Longleaf Golf & Country Club and tied for 16th.
“We know what the goal is, and we’ll be even better this year,” Shuping said.
Teems can hardly wait to start the pursuit of championship rings.
“Logan was a great leader for our team last year and he will be again,” Teems said.

From staff reports Carson’s Colton Correll was announced as the South Piedmont Conference Player of the Year for boys soccer... read more