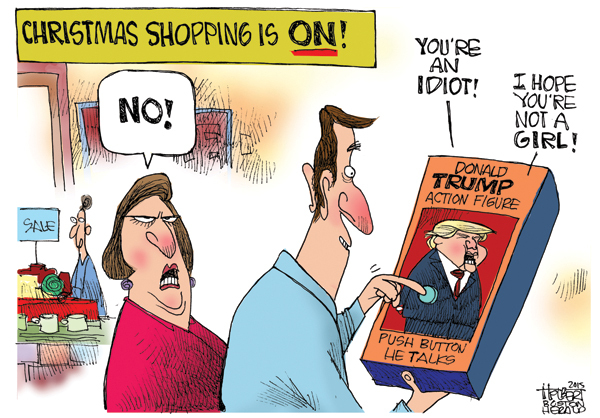 “You got to give the people what they want.”

Even by his standards, it was an astounding performance.

Over the course of just two days recently, Donald Trump spewed bigotry, venom and absurdity like a sewer pipe, spewed it with such utter disregard for decency and factuality that it was difficult to know what to criticize first.

Shall we condemn him for retweeting a racist graphic on Sunday filled with wildly inaccurate statistics from a nonexistent source (“Whites killed by blacks — 81 percent”)?

Or shall we hammer him for tacitly encouraging violence when an African-American protester was beaten up at a Trump rally in Birmingham on Saturday? “Maybe he should have been roughed up,” Trump told Fox “News.”

Shall we blast him for telling ABC on Sunday that he would bring back the thoroughly discredited practice of waterboarding — i.e., torturing — suspected terrorists?

Or shall we lambaste him for claiming — falsely — at the Birmingham rally that “thousands and thousands” of people in Jersey City, N.J., applauded the Sept. 11 attacks and reiterating it the next day, telling ABC that “a heavy Arab population … were cheering.”

Trump is a whack-a-mole of the asinine and the repugnant. Or, as a person dubbed “snarkin pie” noted on Twitter: “Basically, Trump is what would happen if the comments section became a human and ran for president.”

Not that that hurts his bid for the GOP nomination. A Washington Post/CNN poll finds Trump with a double-digit lead (32 percent to 22 percent) on his nearest rival, Ben Carson, who is his equal in nonsense, though not in volume. Meantime, establishment candidate Jeb Bush is on life support, mired in single digits.

And the party is panicking. In September, Bobby Jindal called Trump “a madman.” Two weeks ago came reports of an attempt to lure Mitt Romney into the race. Candidate Jim Gilmore and advisers to candidates Bush and Marco Rubio have dubbed Trump a fascist. Trump, complains the dwindling coven of grown-ups on the right, is doing serious damage to the Republican “brand.”

Which he is. But it is difficult to feel sorry for the GOP. After all, it has brought this upon itself.

Keeping the customer satisfied, giving the people what they want, is the fundament of sound business. More effectively than anyone in recent memory, Trump has transferred that principle to politics. Problem is, it turns out that what a large portion of the Republican faithful wants is racism, xenophobia, Islamophobia, the validation of unrealistic fears and the promise of quick fixes to complex problems.

That’s hardly shocking. This is what the party establishment has trained them to want, what it has fed them for years. But it has done so in measured tones and coded language that preserved the fiction of deniability. Trump’s innovation is his increasingly-apparent lack of interest in deniability. Like other great demagogues — George Wallace, Joe McCarthy, Huey Long, Charles Coughlin — his appeal has been in the fact that he is blunt, unfiltered, anti-intellectual, full-throated and unapologetic. And one in three Republicans are eating it up like candy.

Mind you, this is after the so-called 2013 “autopsy” wherein the GOP cautioned itself to turn from its angry, monoracial appeal. Two years later, it doubles down on that appeal instead.

And though candidate Trump would be a disaster for the Republicans, he would also be one for the nation, effectively rendering ours a one-party system. But maybe that’s the wake-up call some of us require to end this dangerous flirtation with extremism.

“You got to give the people what they want,” says an old song. Truth is, sometimes it’s better if you don’t.