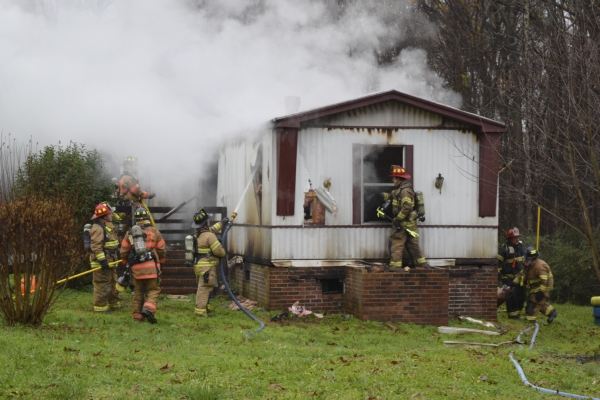 Firefighters break holes in the siding of a mobile home on Litaker Road to put out the flames. Rebecca Rider/Salisbury Post

Fire destroyed a empty mobile home on the 200 block of Litaker Road this afternoon.

Locke Fire Department received the call at 2:43 p.m. and took defensive action. Locke Fire Chief Rusty Alexander said he determined that the structure was unsafe for fire crews to enter and instructed firemen to tear holes in the siding to fight the blaze. Crews had to break holes in the brick foundation in order to attack the flames, which Alexander said is an unusual strategy to use on a mobile home.

The home belongs to Mitchell Litaker, who lives in Greensboro. He rents the home out but says the last tenant left more than a month and a half ago. In the past month, he installed a new washer and dryer, put down new tile and had work done on the heating system, hoping to draw another tenant.

Litaker says he visited the property about an hour and a half before the blaze started to turn off the lights and turn down the heat. But when he got there he found he’d left his keys at his Julian Road garage. He thought he’d go back again, after work.

“Next thing I know, my cousin called me and said the trailer’s burning on fire.”

The trailer was left to Litaker after his father’s death, but Litaker said all of his father’s things were moved out long ago. He’s just thankful that no one was inside at the time of the fire.

“Anything’s replaceable,” he said, “That’s the way I look at it. It’s all replaceable. Lives aren’t.”

West Rowan, Franklin and Cleveland fire departments and Rowan Rescue responded to the call. Alexander called for extra manpower from Woodleaf Fire Department. The cause is under investigation by the Fire Marshal’s office.