Woodson trades in hectic schedule to help daughter with hers 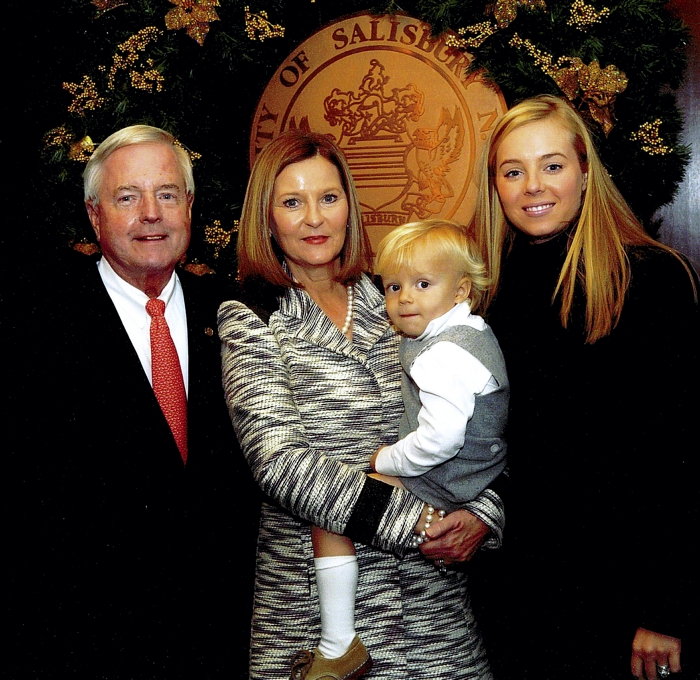 It is easy to get dressed because Woodson laid out all of his clothes the night before, from his shirt and pants to his socks and tie. Sometimes he would have to lay out multiple outfits — you can’t wear the same outfit you wore to fix a machine at your dry cleaners to speak to local veterans at a luncheon.

At 6:30 a.m., Woodson goes out to the car and puts all the addresses for the locations he will have to go to into his GPS. That way, if he is running late all he has to do is hit one button and drive.

Now here’s where it gets a little hectic.

Woodson might start his day at his dry cleaning business, Vogue Dry Cleaners, and then go speak at a ladies’ breakfast. Then, he might go back to the cleaners to fix some equipment before hurrying off to a ribbon cutting at a local business. He may help a few customers back at the cleaners and then zoom off to teach a fourth grade class before being pulled back to the cleaners to fix a broken machine. But he has a banquet to attend so he is trying to get his suit on while working with the grease of the machine. And in between everything, he is answering phone calls, emails and text messages.

“I think my record was seven events in one day,” Woodson said.

The life of the mayor of Salisbury is a busy one, but Woodson said it was never too much for him.

“I never got stressed as mayor. In all the 18 years, nothing ever really bothered me. I just knew I did the best I could,” he said.

As mayor, Woodson received many requests for help from citizens, but there was one recent request that took priority over all the others — a request from his daughter.

After being a part of Salisbury’s City Council for 18 years, Mayor Paul Woodson decided not to seek reelection so he could help his daughter with her book tour.

Woodson is leaving quite a legacy behind, a legacy that began in elementary school.

A vote for Woodson

Woodson has been involved in politics since he was a young child. He said he won his first election in the fifth grade. Since then, he has won 17 elections in his lifetime, including all of the elections he won on the City Council. Some he won while in school and others he won while he was working as manager for different mills.

As far as big politics, Woodson first got involved by helping Fred Dula with his run for county commissioner. He helped him campaign, put up signs, work the polls and also attended forums with him.

He won a spot on the Salisbury City Council and actually had so many votes, he was made mayor pro tem.

Since then, Woodson has been a councilman for two years, mayor pro tem for 12 years and mayor for four years.

Whenever Woodson would become the manager of a new mill or factory, he would always try to identify the company’s biggest problems. He did the same thing with the city of Salisbury.

“When I came in office, one of the biggest goals myself and my council had, I always put my council because you can’t do it by yourself, was a one-stop-shop,” he said. Woodson said he had received many complaints about citizens trying to get permits but having to go to five different places and getting five different answers.

Woodson and his council opened the city’s One-Stop Shop where citizens can get all their construction and property development permits.

Woodson did not stop there. He worked with former Congressmen Mel Watt to revitalize the Civic Park Apartments into the Brenner Crossing Apartments. Woodson said the apartments are great for people of moderate income.

“They make Salisbury look really good, that we’re trying to help everybody,” he said.

Woodson also helped extend greenway trails for people to jog or walk their dogs and started tax incentives and grants to encourage people to repair and update the downtown area.

Woodson and his council also started the BlockWork Neighborhood Improvement Project. Every year, the city chooses a neighborhood and paints the houses, works on roofs and plants greenery.

“I was the plant man. I dug the holes and put plants in them. That was my assignment,” Woodson said.

Over the years, Woodson and his council have increased the fund balance, started a storm water utility, began a purpose-built community in the West End, improved city-county relations and the list goes on.

Woodson is not afraid to admit that Salisbury has some things to work on. The city has a crime problem, like any other city, and needs to work on the infrastructure, but one of the biggest problems the city has is poverty.

Woodson believes losing the big mills and factories is one of the causes of Salisbury’s poverty problem. He said when he was a manager of a textile mill, the employers took good care of their employees. There was a nurse at the job who would provide them with free health care and employers would even offer the employees lines of credit with low interest rates to help them buy cars and houses.

Despite the problems, Woodson is hopeful.

Woodson said if he could be a full-time mayor, he would be. He definitely had enough on his plate without also running a dry cleaners.

“I think my first year as mayor I got over 250 invitations to attend events, probably spoke 50 times,” he said.

Some of those speaking engagements included introducing people, saying a few words before ribbon cuttings and welcoming people at events like banquets and luncheons.

Woodson also said he visited 24 out of the 35 schools in the county. He taught different classes about government, politics and what it took to be a mayor. He also taught at early colleges.

“I just taught about life a lot. You know, experiences, early college was good, get a technical degree if they could,” he said.

Woodson wanted to visit every school in the county, but his schedule was always so full he never got a chance.

“Being mayor is pretty much 30 to 50 hours a week, depending on what week it is,” he said.

There were many days were Woodson would speak at three different events on three different subjects, maybe going from teaching an elementary school class to attending a women’s luncheon to greeting World War II veterans. The Internet saved him many a times on getting his facts straight.

The women in his life also helped him stay on top of things.

“You know, behind every successful man is women,” he said.

Between his wife, Beth, helping him run the dry cleaners, another woman as a full-time manager of the dry cleaners and all the women who worked with him at city hall, Woodson was able to get it all done.

“In my 18 years, I think I called back 99 percent of the people that called me,” he said. He also said he probably met with all the people who asked to meet with him and emailed back about 95 percent of the emails he received.

And by the way, barking dogs, potholes and streetlights were the things Woodson got the most complaints about.

Woodson is leaving all of that behind for his daughter, Kristy Woodson Harvey. With her second book debuting in April, she will soon be traveling around the country to promote it. Her husband, Will, is a dentist and cannot travel with her, so she turned to her father.

Kristy already has 42 events lined up for the next year.

While she is promoting, Woodson will help take care of her 4-year-old son, Will.

“If she’s doing a three or four hour book signing or something and I’m with her and he’s there, I’ll take him out to a driving range or I’ll take him somewhere,” Woodson said.

Woodson said Will calls him his best buddy. Woodson knows exactly what to do to occupy his grandson while his daughter is working. They’ll play golf together, kick soccer balls around, visit arcades and eat yogurt.

There is even a possibility of a movie deal for Kristy’s novel, so if that happens she will need even more help with her son while she is getting the screenplay together.

“If she becomes a big-time author, I’ll never be back because I’ll be working with her and traveling with her,” Woodson said.

Woodson said depending on how Kristy’s career goes and his time constraints, he doesn’t know if he would run for city council again. But he did say if there was a separate mayor’s election, he would have run for a council position.

In the meantime, Woodson said the new mayor, who will probably be Council Member Karen Alexander, will have to deal with the same time problems that he had as mayor.

With a good council beside her, Woodson said she will do fine.

He said he will miss his great council, staff and all of the people he worked with.

“I just want to tell everybody I loved being their mayor and I enjoyed meeting with everybody. I think we’ve gotten a lot of problems solved, a lot of issues solved.”