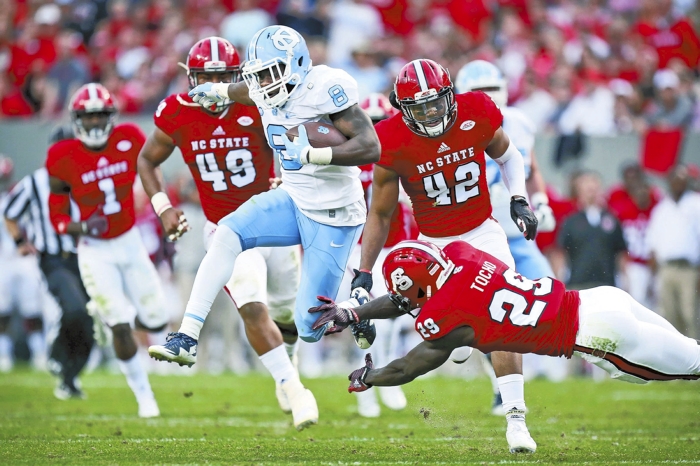 Adam Jennings/The Rocky Mount Telegram via AP ... North Carolina’s T.J. Logan (8) jumps out of the reach of North Carolina State’s Jack Tocho (29) during the first quarter of Saturday’s college football game in Raleigh. Logan scored a touchdown on the play, one of five in the opening period by the Tar Heels. North Carolina went on to win, 45-34.

A week after accomplishing the first, the No. 11 Tar Heels took care of the second with a dominating start on the road against a longtime nearby rival.

Hood finished with a career-high 220 yards rushing and two touchdowns to lead UNC (11-1, 8-0 ACC, No. 14 CFP), which had already wrapped up the Coastal Division title and a trip to next week’s ACC championship game to play No. 1 Clemson.

But Fedora said he never sensed his players looking ahead.

“No one talked about it,” he said. “The coaches didn’t talk about it. We knew what we had to do. This was to finish our goal. Now we reset those goals and we can talk about it now.”

UNC certainly came out with an edge, driven by memories of last year’s 35-7 loss in which the Wolfpack physically beat up the Tar Heels and ran for 388 yards.

UNC had that score reversed by the end of the first quarter.

Logan scored on runs of 42 and 40 yards, while Hood had a 39-yard run before scoring from a yard out in that opening avalanche.

Gaping rushing lanes. Downfield matchups in the passing game. Personnel mismatches. UNC won them all in that opening quarter, running for 214 yards and totaling 308 yards on the way to 553 for the game.

“We know what happened last year,” Hood said. “They kind of took it to us for sure. We knew we had to make a statement and come out here and play a different type of game, bring a totally different mindset — had to show we aren’t the same team as we were last year.”

UNC also got TD catches from Quinshad Davis and Mack Hollins, tying the program’s single-quarter scoring record. That was too big of a hole for the Wolfpack (7-5, 3-5), who managed to slow the Tar Heels’ early run but never recovered.

“I take ownership for (the first quarter),” Wolfpack coach Dave Doeren said. “We weren’t ready. For whatever reason, we weren’t setting edges, we weren’t tackling and doing the things we’ve normally done.”

Jacoby Brissett threw for two touchdowns and ran for two more for N.C. State, which put together a couple of long drives in the second quarter to finally slow the Tar Heels’ pedal-to-the-floor start.

But the Wolfpack got no closer than 12 after the opening quarter until a meaningless TD in the final 2 minutes.

The Tar Heels didn’t finish particularly strong. They had three turnovers for the second straight week after going three games without one, and Hollins dropped a sure TD catch in the third quarter to help the Wolfpack hang around.

Still, they added another memorable moment in what has become a historic season.

They earned their first 8-0 mark in ACC play. They became only the fourth team to match the program single-season record of 11 wins, last set in 1997 in Mack Brown’s final season before taking over at Texas.

More recently, it marked the first time UNC has swept the rest of the “Big Four” — North Carolina-based ACC teams Duke, N.C. State and Wake Forest — in the same season since 2004.

“I’ve been saying it all year: this team’s got a lot of grit,” Fedora said. “This is a special group, they really are.”