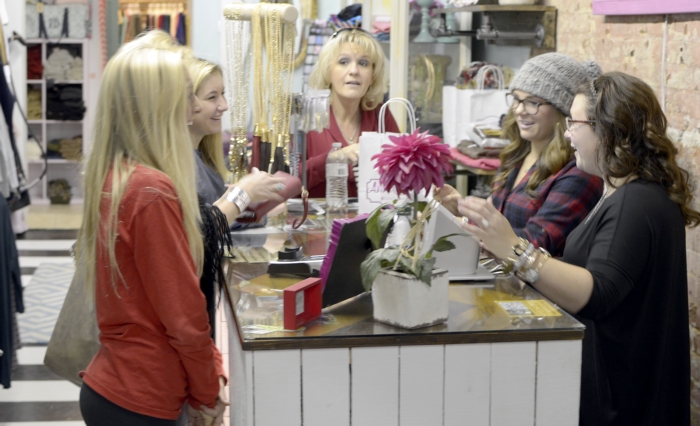 Hugh Fisher/For the Salisbury Post Andie Myers and Corbin Phifer, right, share a laugh with the Eller family of Salisbury at the Anna Craig Boutique.

SALISBURY — In what’s become a new tradition for some locals, the phenomenon of Small Business Saturday brought additional holiday shoppers out to local businesses Saturday.

Started as a promotional campaign by credit card company American Express, the event has become a new tradition, aided by awareness of the fact that money spent in a community works to enrich the local economy.

Saturday’s sales, plus a Friday Night Out in downtown Salisbury on “Black Friday,” the traditional start to the Christmas shopping season, left some merchants saying the weekend after Thanksgiving had been good for them.

“Business has been real good,” said Dennis Lunsford, owner of Your Kitchen Store and More on West Innes Street.

“Most of the people that are coming in are buying something,” Lunsford said, adding that many of them are looking for gifts.

Doris Yost, who came to the store to look for baking pans, said she was excited to learn about the new shop. “You do want to support local places,” Yost said.

A few doors down, at Anna Craig Boutique, clerks Andie Myers and Corbin Phifer waited on a line of customers six deep.

Rachel Eller, a senior at East Rowan High, wasn’t looking for gifts. She came in with her mother and sister to look for clothes for senior pictures. “They helped me find some cute outfits,” she said.

Store owner Drew Myers said patrons who spent $100 got a free $15 gift card for a future visit. “It looks like it was a success,” Myers said. She said some shoppers who had less than $100 “definitely rounded up” to get the bonus.

“It feels good because we’re supporting the local community instead of a large corporation,” Eller said.

“It brings in more businesses when you support them,” said Joy Eller, Rachel’s mother.

Over at Griffin’s Guitars, owner Trent Griffin said the top-selling instrument of the holiday season so far was the ukulele.

“We ran a special on ukuleles for Black Friday,” Griffin said, and had several buyers.

“I think it’s the combination of size and affordability, plus the fact that some pop music has ukulele in it,” Griffin said. “Guitar players want ‘em.”

“This morning, for the first hour or two, we were swamped with people,” Griffin said. “A lot of times Black Friday isn’t our day, people concentrate on the big box retail stores, but this year, yesterday was just as busy as today has been.”

An employee at Skinny Wheels Bike Shop said one woman had come in to buy a T-shirt “just because it was Small Business Saturday.”

And Stephanie Reilly, owner of BellaJayde Boutique on South Main Street, said some customers came in right after she opened the doors.

“One girl came in and actually had a bag that said ‘Shop Local,'” Reilly said.

Aside from “Black Friday” and the weekend after Thanksgiving, Karczewski said she hopes a renewed interest in downtown businesses will keep customers coming back beyond the holidays.